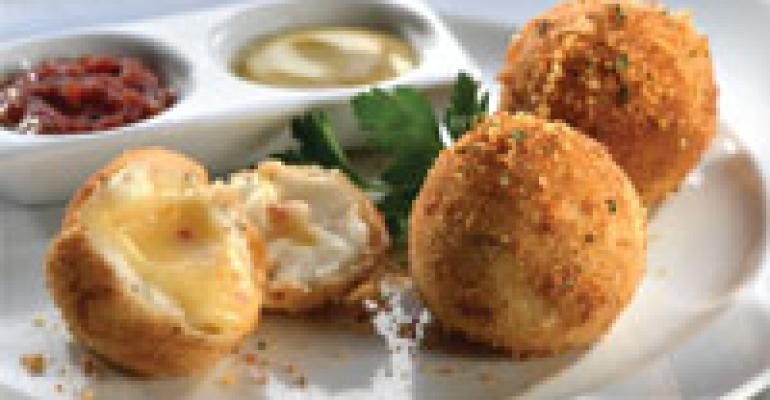 The Power of "WOW"

Catering sales in the noncommercial sector are on the rise following a tough recession. And while food quality is critical to any successful event, it's the experience that guests request again. Or not.

Corporate customers of 1st & Fresh Catering in Chicago can order from a host of lunch-menu items at an eminently reasonable price per person. Hand-pulled-pork barbecue served with fresh Kaiser rolls, housemade coleslaw, potato salad and assorted cookies is one option; another is 1-lb. baked potatoes with a host of toppings, accompanied by salad and a selection of dessert bars. From hand-formed meatloaf with mashed potatoes and gravy to chicken with Marsala sauce, the LTO supplement to a broader menu spotted with signature dishes from local chef celebs is a corporate-catering antidote to tough economic times.

Launched in 2008 as the external catering arm of Aramark, 1st & Fresh operates in Philadelphia and five other cities. The initiative has realized double-digit growth in some markets thanks primarily to its emphasis on fresh, seasonal food at breakfast, lunch and special events, but also to its commitment to professional service. Orders are priced the same or less (for comparable quality) of commercial caterers in the area, and it's always on time.

“We're thrilled with the food we're producing,” says Tom Walters, 1st & Fresh's vice president. “We don't just buy ground or roasted turkey; we brine our own and roast it every day. We're making everything from scratch, so the quality of the product is great. But the differential is that drivers and delivery people must be articulate, well groomed and have a real service mentality. It's about doing the fundamentals at a very high level. Our customers simply want great food at a great price, served by wonderful people.”

While nearly every foodservice operation in America has suffered from the recent recession, as the economy's health begins to improve, catering businesses are starting to rebound, according to Michael Roman, a well-known catering authority and founder of Minneapolis-based Catersource Magazine, Conference & Tradeshow.

For example, the economic downturn brought with it a sharp decline in catering business at Elmhurst Memorial Healthcare in Elmhurst, IL, says David Reeves, MBA, director of hospitality services. But now sales are approaching pre-recession levels, and Reeves anticipates growth ahead. Elmhurst Memorial will open a healthcare campus next year with a 15,000-sq. ft. conference center. “We collaborated in the design for a kitchen that will be very conducive to our catering needs,” Reeves says.

A similar trend is being reported elsewhere.

“I think as people rebound from what's happened with the economy, catering should return to what it was before,” says Cameron Mitchell, assistant director, executive chef and production manager of Covenant College in Lookout Mountain, GA, for Chartwells College & University Dining Services. Mitchell's commitment to providing memorable events serving one to 400 earns him 95 percent of the college's catering business that might otherwise contract with commercial caterers in nearby Chattanooga.

Catersource's Roman predicts catering-business growth of 4 to 8 percent in the noncommercial sector in 2010, with higher percentage growth for the foodservice industry over all.

Driving that growth in the new economy is universal demand for value. Whether it's a board-room luncheon or a wedding reception for 300, value isn't determined by price alone. It's offering an experience, what Roman dubs “performance creativity” — catering as entertainment. “You have to focus on ways to deliver excitement,” he says. “It has to be mind-boggling and memorable. A great performance will overcome anything. People will eat anything if it's presented in an exciting way.”

Noncommercial operations that struggle with catering often have an order-taking mentality of “What do you want?” rather than “This is what we can do for you, and it's really exciting,” Roman says. “Talented operators at an Army base can do as well as an upscale Manhattan caterer.”

According to market-research company The NPD Group, overall U.S. foodservice sales won't return to pre-recession levels until the unemployment rate improves significantly, and that's not likely to happen until at least next year. No catering operation hoping to thrive can thus afford to ignore opportunities under its nose, Roman says. “Think like commercial caterers that provide ‘wow’ services. Any team that doesn't have a passion and desire for ‘wow’ is never going to excel.”

With that, Roman offers a host of ideas for noncommercial operations to promote their catering programs and increase sales.

“There's no reason a noncommercial kitchen can't be selling food and beverages to other licensed purveyors,” Roman says.

Cook in the parking lot

Or grill near the outdoor entrance to a dining hall or grab-and-go outlet. Doing so captures the attention of customers who might only know your operation's capabilities from the serving line.

Ring your own (wedding) bell

People get married in slow as well as boom times. “Even if toned down, weddings are still very profitable and powerful,” Roman says, adding that operations without large banquet rooms can pitch a rented sturdy canopy or tent in an outdoors open area that stays up through milder-weather months.

Drop off, or pack it to go

Don't underestimate the attraction of having a party delivered or picked up for self-service, Roman says.

Get in touch with your inner child

Kid-centric events such as birthday parties are big business, and other companies are making dollars marketing children's events.

Why not station a member of the catering team near the entrance during busy mealtimes? Have fliers and other printed materials on hand, Roman says, but treat them as merely one tool in the arsenal of an energetic salesperson who can personally describe to would-be customers what your catering program can do.

Teach the community to cook

You've got experienced culinary personnel and cooking equipment. Why not teach residents in your area how to make pasta or petits fours? Charge a fee for such classes if you want, but more important, it's another way to promote your facility and catering capabilities to would-be customers.