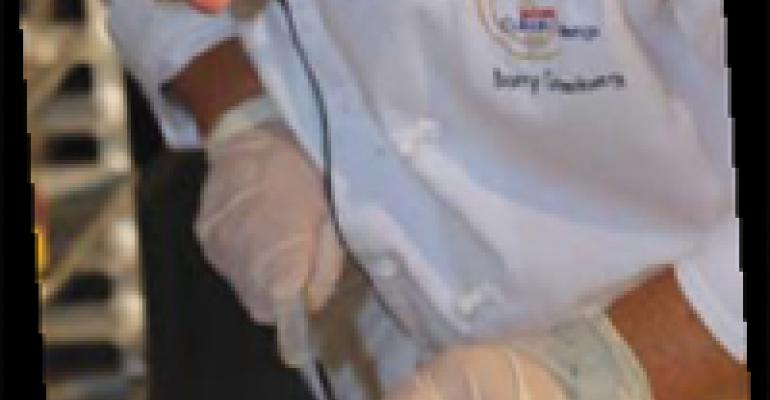 A Roundabout Road That Led to Iowa City

Not many chefs who work the fine dining restaurants, resorts and spa hotels of Martha’s Vinyard, Vail and Southern California wind up in Iowa City, Iowa—and in university foodservice, no less!—but that is what Barry Greenberg has done for the past 15 years.

Greenberg’s continent-spanning career seems firmly docked in a place far removed—geographically and culturally—from where he grew up and where he cut his culinary teeth. He serves as foodservice director and executive chef of the University of Iowa’s Memorial Union, with responsibilities for retail and catering operations generating some $2.4 million annually. He oversees a staff of 65 full-time employees and up to 500 student workers.

For the past two years Memorial Union Catering and also managed food and beverage in Iowa’s renovated football stadium, where it runs the 46 private suites, the nearly two dozen university suites and club space for about 3,000.

Meanwhile, Greenberg also found time to enter—and win—the 2007 NACUFS Culinary Challenge on his first try this past summer. Previously, he had been active in the annual event only as an organizer.

How did you become a chef
When I was in high school in Wallingford, CT, I took a part time job at what was basically a wedding factory as a bus boy, but I always thought that what the guys in the kitchen were doing was much cooler. Later, I took a job at a family restaurant in our town, started cooking there for my last two years of high school and made the choice that I would like to pursue this as a career.

Then?
After graduating from Johnson & Wales in 1985, I worked seasonal jobs in the Northeast for a few years. I also started learning catering as well as restaurant and line work and really enjoyed the different situations you’d be put into, from small dinners to large weddings. It was all off-premise stuff, so we’d roll up to somebody’s house and try to figure out how we were going to pull off a meal in these seasonal homes where often the kitchens were very poorly built for doing any kind of catering.

What was your most memorable meal from that era?
Trying to cook 225 lobsters over two electric burners. I still have nightmares about that.

How did you wind up out west?
I’d always wanted to cook in Colorado because lots of friends had moved West and I was really into skiing. I made it out to Vail, where I worked at a small fine dining restaurant. After a year, I moved to San Diego to be with my future fiance—now my wife of 17 years—and stayed for almost two years. I worked at LaCosta Resort & Spa, then moved to the opening team of the Hyatt Regency in La Jolla, where I was saucier for the better part of a year. Later, I moved over to the hotel’s Cafe Japengo restaurant, which featured Pacific Rim cuisine with an incredible sushi bar, where I learned all about Pacific Rim and Asian fusion. Quite a change for a guy from the Northeast! It was eye-opening. Soon, though, I figured that if I was going to get married I needed more than just a two-year degree, so I returned to J&W and got a foodservice management degree.

I’m intrigued to learn how all this lands you in Iowa...
Well, after graduation, I had wanted to enter a food & beverage management training program around there, but the economy in the early 90s was not agreeable. I had taken a practice interview with my former boss at the University of Iowa and I really liked what he had to say. I wound up moving here in November of 1992.

Why did you get into the NACUFS challenge?
I had always participated as an organizer and show chairperson but stepped off of the committee a year or so ago to concentrate on my new job here as foodservice director. At that point I found the time and initiative to participate myself. I had competed in other ACF events in the past few years but I always wanted to do the NACUFS Culinary Challenge.

Tell me about your winning dish, the bento box. A legacy of your SoCal days?
Yeah, that and just a desire to do something different. When you have a protein that doesn’t lend itself to any one kind of cooking, it seemed like a good idea to do a sampler plate. And since it was tofu, Asian seemed to work perfectly. I had this bento box idea and just figured out how I was going to fill all those little compartments. Some of them were pretty classical, like miso soup and the nigiri style sushi. Those are no-brainers that have to be there, but I was also able to do some creative things with the dumpling and the seaweed salad with the tofu dressing and the spring roll. I wanted to show the versatility of the product, as well as show versatility in cooking technique. You want to show as many different skills as possible.