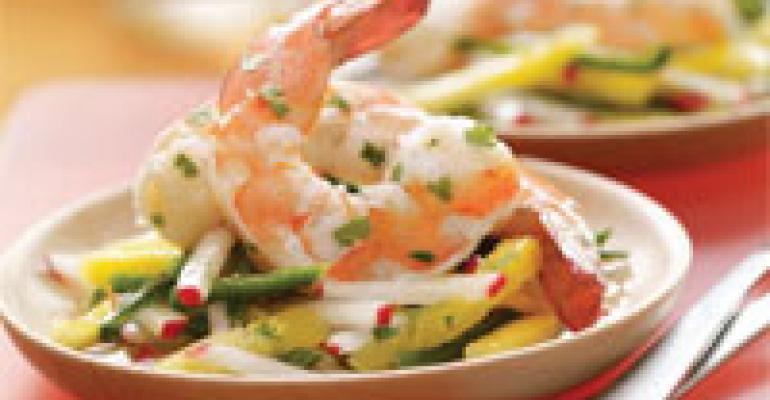 Shrimp is available in many sizes and types. Here are shrimp buyer's basics.

As the memorable character “Bubba” said in the movie “Forrest Gump,” “There's pineapple shrimp, lemon shrimp, coconut shrimp, pepper shrimp, shrimp soup, shrimp stew, shrimp salad…” The sweet-tasting crustacean is a perennial seafood favorite. For the past decade, shrimp has been the most-consumed seafood species per capita in the U.S., according to the National Fisheries Institute.

Here is information to help complete your shrimp needs for the coming year.

Types of Shrimp. Shrimp is either wild-caught (from bays, estuaries and oceans) or farm-raised in a controlled environment.

Warmwater: The most plentiful shrimp in the U.S. market, it is categorized by shell color when raw: White, brown, pink and black tiger.

Freshwater: Distinguished by bright blue shells, or if from Asia, rich yellow shells with brown stripes. It is one of the largest varieties and can be wild-caught or farm-raised.

Coldwater: Known as bay, tiny, baby or pink shrimp, this type is wild-harvested off the coasts of Alaska, Washington, Oregon and Maine, and from the waters of Greenland, Iceland and Norway.

It has bright, reddish pink shells, both raw and cooked, with a sweet taste and soft texture. Coldwater shrimp is sold primarily as cooked and peeled in 150 to 500-lb. quantities.

Forms. About half of the shrimp sold In the U.S. is headless. It is often called “shell-on” or “green headless (green meaning raw).”

Frozen shrimp is available P&D and individually quick-frozen (IQF) with the shell on. It is generally sold in 5-lb. net weight blocks.

Cooked shrimp may be cold water or tropical-based, and is usually IQF and available with or without tails. P&D cooked shrimp with tails is often called “cocktail shrimp.” Headless cooked shrimp sold in the shell is called “peel and eat.”

Pricing: Daily and weekly shrimp prices can change on a dime with wide price variations for different sizes. It's best to ask suppliers for the price and size of shrimp just above and just below the size you want to buy. Moving up or down a size can help save costs.

Beware of prices that sound too good to be true. Quality, sizing, net weight, taste and texture should all be considered when comparing shrimp prices.

Be wary of shrimp in cello wrap without its printed outer carton citing the country of origin. Also, block frozen shrimp should be evaluated for unnecessary water weight.

Sizing Shrimp. Shrimp is sold by size, or count per pound. For example, a 16/20 count is 16 to 20 shrimp per pound. The term “under,” abbreviated as “U” or “UN” indicates larger-sized shrimp.

Avoid ordering shrimp by name only; always look for count size, in addition to, or instead of the name.

Quality, Thawing & Storing. Shrimp should be uniform in color, size and condition. Black spots or rings, though not harmful, can indicate mishandling during harvesting. Also keep an eye out for pitted or gritty shells, yellowing or pink tints. In some cases, a pink discoloration may be a sign of a decomposing product. Shrimp should be firm and moist.

Thawing a block of shrimp is best done slowly under refrigeration, for 24 to 48 hours. Running it under water is quicker, but tricky. If the water is too warm, it could actually start cooking the shrimp. And waterlogged shrimp loses flavor and nutrients.

Thawed shrimp — cooked or raw — can be stored at 30 to 35°F for up to three days in a closed container covered with ice.