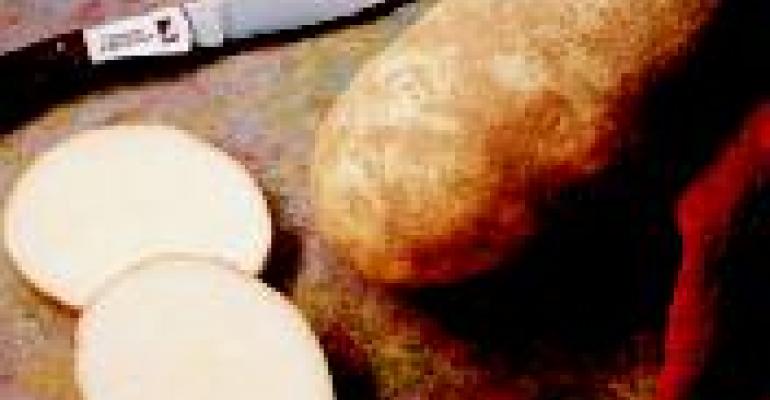 This Spud's for You!

What has many eyes, but can't see? You guessed it, a potato! Potatoes are the worlds fourth food staple, contain no fat, and are 80% water.

The season for new potatoes is spring to early summer, though potatoes of some variety are available year-round. In America, most potato consumption involves four basic varieties: russet, long white, round white and round red. However, many other varieties are finding increased usage in today's more eclectic foodservice offerings.

The russet Burbank potato (also called russet and Idaho) is long, slightly rounded, has a brown, rough skin and numerous eyes. Its low moisture and high starch content make it the preferred raw material for the beloved french fry.

The medium-size round white and round red are also commonly referred to as boiling potatoes. Extremely similar, the round white has a freckled brown skin and the round red has a reddish-brown coat. They both have a waxy flesh that contains less starch and more moisture than other varieties.

Post-Atkins, profit growing
There is little doubt that potatoes are nutritious.An average potato with skin contains 45% of the daily value for vitamin C, and as much or more potassium than either bananas, spinach or broccoli. It also contains trace amounts of thiamin, riboflavin, folate, magnesium, phosphorous, iron and zinc, and offers three grams of fiber per serving.

Want to grow your profit margin? Try displaying nutritional information about potatoes by your potato bar or serving station.

When calculating profits for various processed potato products, it's important to consider the number of servings per case and per pound. Choose products that have less moisture so there is less shrinkage and more yield per pound.A big, full-looking portion better satisfies a customer's expectations and enhances perceived value.

There's an ideal french fry for every cafè, including coated fries that stay crisp longer, oven-baked varieties, quick-cooking fries, trans fat-free fries, as well as countless different shapes and seasoning profiles. Sliced parcooked or ready-to-cook potato products are available,as are roasted potato products that come in a medley of pre-seasoned cuts and can be purchased ready to heat or serve. Mashed potato products are available frozen, refrigerated or dehydrated with varying seasoning and portion options.

When purchasing fresh potatoes, remember that proper storage is essential.

Do not refrigerate fresh potatoes. Potatoes stored below 40°F will develop a sweet taste and will turn brown when fried. Avoid prolonged exposure to light, which causes potatoes to turn green. This greening results in a bitter flavor and should be pared away before the potatoes are used.