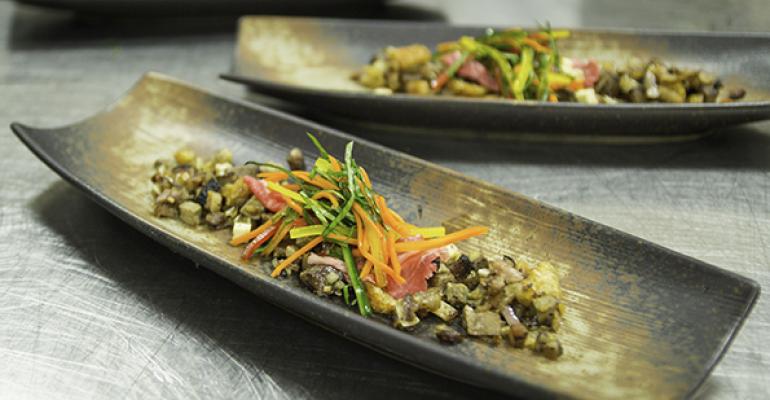 <p>Minced and mixed with vegetables, beef becomes part of the whole rather than the main attraction at both R&amp;DE Stanford Dining&rsquo;s special event foodservice.</p>
Operations>Production

Dining services found beef from Australia met all its environmental checkpoints, as well as trimming costs.

When Stanford University’s Residential & Dining Enterprises team decided to seek out new options for sourcing sustainable beef, they found their answer in a most unlikely place: Australia.

The search for better beef started in 2013, when the California-based university committed to sourcing a more sustainable, higher-quality beef supply.

The R&DE Stanford Dining team chose Australian beef after investigating its quality, price, sustainability and even its impact on water use in California. The program began in 2014.

“We evaluated a number of sustainable practices, culinary standards, food safety procedures and humane practices before making the decision to switch to beef from Australia,” says Eric Montell, executive director for R&DE Stanford Dining, which serves about 4,000 undergraduate students at 11 dining halls and two late-night dining operations. “For starters, Australian cattle are grass-fed, humanely raised on pasture, are free of hormones and antibiotics and halal-certified.”

How exactly is beef from Australia more sustainable, you might be asking? Products shipped by ocean freight shipping containers trump conventional shipping in terms of efficiency, Montell says. “The beef is container-shipped to the United States, one of the most efficient methods of transporting food,” he adds.

Water savings for the state of California proved another bonus. By sourcing outside of the state, “changes in our beef program have resulted in 50 million gallons of California water not used per year—critical during the severe drought,” Montell says.

The Aussie beef has also won applause from Stanford chefs. “Our chefs have enjoyed testing and cooking with Australian grass-fed beef and are happy with its flavor and culinary profile,” Montell says. “Australian beef seems to release less water when cooked [than others we’ve tested], allowing it to brown more quickly with minimal shrinkage.” Grass-fed beef has less saturated fat, so it also syncs with Stanford’s commitment to wellness.

Then there are the cost considerations. R&DE Stanford Dining purchases about 120,000 pounds of Australian beef annually. “For the 2014-2015 academic year, if we had purchased the same amount of local, grass-fed beef, it would have cost us 29 percent more,” Montell says. “And had we chosen domestic commodity beef, we would have paid 6 percent more.”

Keeping students in the loop

The resulting savings from sourcing out of Australia go straight back to the school. “What we save on meat purchases allows us to buy other high-quality, environmentally responsible products to serve our students,” Montell says.

Because sourcing from Australia seems counterintuitive, R&DE Stanford Dining has been proactive in keeping students in the loop from the beginning. “We’ve posted information about the program on our website, used digital signage, written about it in our bi-monthly newsletter [and] held sustainability classes in our Teaching Kitchen,” Montell says. “Our student dining ambassadors who serve as liaisons between students and dining staff and who work directly with our chefs, have also helped share details of the program with their peers.”

“Our students are conscious about the food they put into their bodies and how it affects their performance,” Montell says. “They are constantly looking for nutritious, sustainable food options. They seem to be pleased with the quality of beef we serve and the creative ways our chefs have incorporated it into menus.”

While Stanford made the shift to find a more sustainable source of beef, the university is also taking a look at how the role animal proteins play on menus.

“The school’s 2015-2016 goal is to reduce the amount of animal protein served by 15 percent, compared to the previous year,” Montell says.