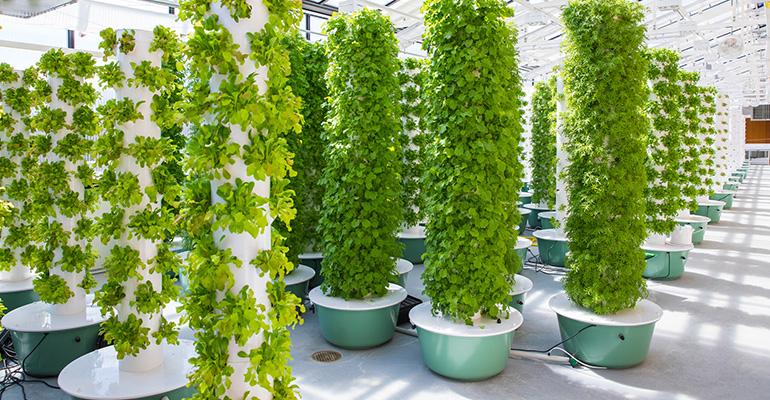 A set of vertical planters grow greens that are deployed to the nearby Village Center’s salad bar and other serving stations.

You can’t get greens that are much fresher than the ones now being served in the University of Colorado-Boulder’s Best Concept Award-winning Village Center dining hall. That’s because they are grown literally next door, in a series of 137 aeroponic towers located in a 3,000-square-foot greenhouse on the roof of an attached adjacent structure.

The mature crops are harvested and cleaned in a washroom right next to the greenhouse, then put in a walk-in produce cooler next the washroom where ingredients for the Village Center dining hall salad bar are staged. From there to the salad bar is about a 20-foot walk, estimates Alex Macmillan, farm manager for UC-Boulder Housing & Dining Services. The aeroponic garden towers are located in a 3,000-square-foot rooftop greenhouse.

“It doesn’t get more local than this!” he exclaims. In fact, he notes, the salad bar area of the servery has a window that looks out into the greenhouse, so students can see where what they are taking came from.

The greens are served not just on the salad bar but also are incorporated into dishes in some of the other stations in the Village Center, including Colorado Hearth, which specializes in serving only food sourced from within 250 miles of the campus.

“So it’s not just in the salad bar—the chefs are making salads with it and cooking with it also,” Macmillan says, “and if there’s kale left over, for example, we can cook it into cookies so there’s nothing going to waste.” Crops are started in propagation benches for a couple of weeks before being transplanted to the towers.

Currently, only greens—arugula, two kinds of kale and nine different kinds of lettuce—are being grown on the aeroponic towers, but “we’re going to experiment with certain crops this summer, kind of see what we can get away with and what we can’t get away with,” Macmillan says.

By “getting away with” a certain crop, he mainly means its temperature sensitivity. The greens grown in the spring do best with temperatures in the 65°F-to-70°F range, but they begin to degrade when it starts getting above that, as tends to be the case in Boulder over the summer.

Among the more heat-friendly alternatives expected to be explored are herbs like basil as well as various peppers and tomatoes.

“We’re really just trying to see what we can grow with these [tower units] at this point,” Macmillan says. “We know the greens grow really well in them, but what else can we grow in them?” The plants are initially cultivated in propagation benches for a couple of weeks before being transplanted to the towers, where they take a couple of more weeks to mature, depending on the crop—arugula takes about two weeks, kale and some lettuces maybe a week longer—but the process is significantly shorter—about a month from seeding to harvest—than with conventional farming techniques.

Also, the plants can be cut to harvest mature leaves and they will then regenerate in a couple of weeks without having to prepare a whole new crop.

Each tower contains up to 44 plants, so there are a little more than 6,000 planting spaces across the greenhouse. How that meets the needs of Village Center dining hall was still being evaluated as the first harvest only took place in early April.

“We don’t know exactly what our burn-through rate is,” Macmillan says. “Those are the metrics we are [collecting] now and trying to see what we’ll need to sustain the produce levels here at the Village, and then if we knock it out of the park, then there’ll be produce that will go to the other dining units.”

One option that won’t be on the table is adding more tower units as the greenhouse space is pretty well maxed out with the existing units.

Macmillan says it’s too early to draw any final conclusion on the tower garden’s impact but “everyone I’ve seen who had [greens from the towers] is very happy with the quality and the freshness,” he offers. “I think the students definitely pick up on the fact that the produce is grown right here and it probably doesn’t get much fresher than that.”

In addition to providing a very locally grown product, the greenhouse towers also will have other benefits, such as work-study and volunteering opportunities for students, as well as tours for both members of the campus community and outsiders to demonstrate CU’s commitment to sustainability.