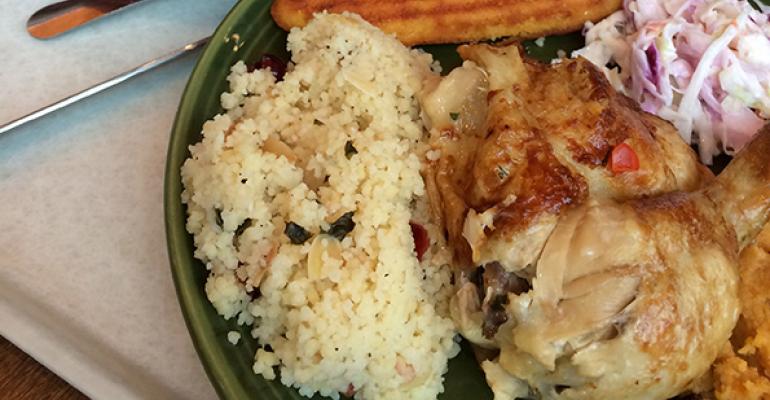 <p>PRE-TRAYLESS: In this photo, taken in January, UGA had yet to go trayless. With great selections of barbecue and all the fixins, it&#39;s tempting (and easy) to take too much food.</p>
Operations>Production

The University of Georgia Food Services has joined the ranks of the trayless. Loading up a tray at Snelling Dining Commons or any of the four other unlimited-access dining halls is now a thing of the past. After periods of gathering data on food and water waste in collaboration with the school’s sustainability office this spring, Bryan Varin, interim director of foodservices, felt ready to make the decision to lose the trays.

“When you do the research and find the data, you learn a lot,” Varin says. “In the past, our stance had been to use trays. But we decided to explore this option, to have an open mind and to see what the positive and negative impacts would be.”

During the week of baseline/control testing at Snelling Dining Commons trays were kept in use and dining services measured waste by volume and by weight, taking measurements from the pulper and outdoor waste receptacles. The water meter was also measured (for washing the dishware).

Even before the numbers came back, Varin had a hunch that a lot of folks were loading up their trays and not eating (or drinking) everything they had chosen.

“What we had been seeing a lot of on campus, whatever the food choices were, the customer would come in, get more than one entrée, a few sides and then dessert,” he recalls. “They may even get four beverages at once. These were standard-size cafeteria trays. People could load them up.”

At the end of that week, “we took the trays away,” Varin says, and “what we found, in comparison was really insightful.”

Without trays, food waste at Snelling was reduced by 26.7 percent. There was also a 16.4 percent reduction in water usage.

The team then worked out some estimates for all the other dining halls. For example, Bolton Dining Hall, which serves 6,000 total customers per day, could save an estimated 280 pounds of food waste per day and 377 gallons of water per week. It doesn’t take a math genius to see how that could add up over a semester.

Based on a Monday to Friday week, Food Services could stand to save about 107,142 pounds of food and 16,550 gallons of water per semester.

“For the food part alone, we could be potentially saving $2 million over spring and fall alone,” Varin says.

While this kind of data made the decision seem clear-cut, it still wasn’t taken lightly, Varin adds.

Later in the spring, the trays were taken away for good. Transparency was key in making the switch, Varin says. Letting students know the reasons for going trayless converted some doubters.

“We wanted to not only have this be a sustainability effort, but also to be really transparent about the potential cost-saving piece for the department, and [how that] means keeping prices on meal plans as low as possible for students,” he says. “We got some negative feedback through comment cards and email, but at the same time, we got an enormous amount of support from people who supported what we’re doing.”

Allison Brannen, public relations coordinator, says signage was placed at all the dining halls to explain the switch to trayless, and that marketing piece will continue into the fall semester.

“What we found is, when we had students who were hesitant about it, when we explained it, we saw a change in their outlook when we showed them the data,” Brannen adds.

A few procedural changes have been made in conjunction with going trayless to make the transition even smoother, including a switch from 12-ounce (very breakable) glass tumblers to 16-ounce plastic tumblers. Eventually, heavy china plates will be replaced by lightweight melamine.

The impact has been starting to show in a few different ways.

“My dishroom staff absolutely loves it,” Varin says. “It’s made a profound impact on their workflow. On the flip side, the dining rooms are little messier at times and require a little more attention. It’s a trade-off, but in a positive direction.”