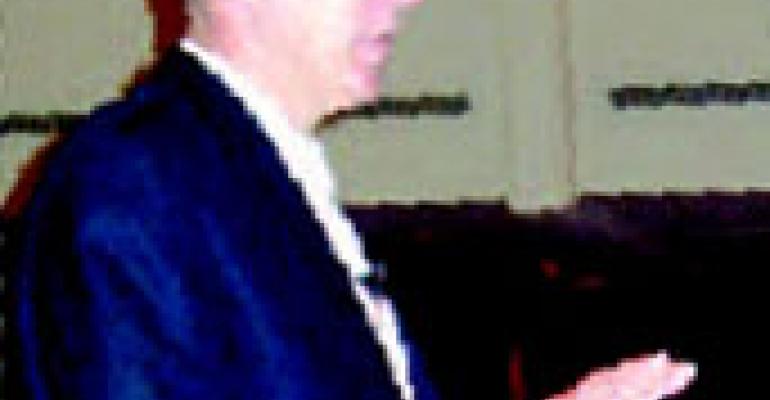 What's Behind Those Food Price Increases?

Hospitality Supply Management,an institute of Supply-Management Forum made up of foodservice purchasing professionals, met in Chicago in May to discuss professional issues and learn about trends affecting their operations.

One popular session was an hourlong presentation by Bill Lapp, vice president for economic research at ConAgra Foods, Inc., that discussed commodity trends and why the prices of many food items increased so sharply over the past year.

Lapp also offered some insight into whether that situation is likely to continue, though he emphasized that because commodities are so volatile, any analysis is subject to change in short order (in fact, some of the price trends he noted had already altered by mid-summer).

In a nutshell, Lapp told the purchasing managers that commodity price increases (for both foodstuffs and non-foods like energy) can be traced to two primary factors: the weakening U.S. dollar and much greater worldwide demand, especially from the booming Chinese market.

Since 2002, the value of the dollar has dropped 25% while commodity costs have risen 46%. In fact, according to the CRB Index, commodity costs earlier this year were at their highest level since 1984.

The good news? April seems to have been the peak for this escalation. Since then, many (though not all) commodities— especially grains and dairy products,but not proteins—have seen price declines, some quite sharp. This is due, Lapp indicated, to a stabilization of the dollar and a slowdown in the Chinese economy. Over this period, cheese prices have fallen 33%, corn 24% and soymeal 23%. However, protein prices remained high through mid-June thanks to continued high demand driven by the low-carb diet fad, along with constrained domestic supplies and a ban on Canadian beef imports.

What about the future? If that could be predicted with certainty, there would be no futures market in commodities. However, the best guess, according to Lapp, is that moderation in price will continue through the end of the year, perhaps extending even to protein after Labor Day and the end of the peak summer season. A continued economic lull in China would also reduce demand from that market, lessening pressure on global supplies.

In the second half of his talk, Lapp discussed each of the major food commodity categories in detail. Here's a rundown:

Edible Oils: A weather-related 12% drop in the 2003 U.S. crop along with a similar drop in South American production and strong Chinese demand have driven prices up. Future prices are largely dependent on the weather's effect on the 2004 crop, which remains to be seen.

Corn: U.S. stocks have seen a dramatic falloff recently, thanks to greater demand from China and domestically, due to increased demand for ethanol. The 2004 crop seems to be off to a good start, though a record 10.5 billion bushels will be needed to satisfy estimated demand. As an aside, Lapp noted that higher corn prices mean higher feed costs for cattle breeders, raising the cost of meat production.

Soymeal: Prices remain high (about $300/ton vs. $177 a year ago), thanks to smaller U.S. and South American crops in 2003 and strong Chinese demand. Also, the profitable livestock sector promotes greater demand for this important feed crop. Ominously, early forecasts predict another smaller South American crop in 2004.

Wheat: Unfortunately, a big 2003 U.S. crop was offset by reductions in foreign supplies, leading to rising prices (about $3.90 a bushel in July vs. $3.30 a year earlier). Again, Chinese demand takes some of the blame. A rebound is expected in foreign supplies in 2004, but that may be offset by a smaller U.S. crop.

Meat: Continued strong Atkins/South Beach-fueled demand combined with small production increases in beef or pork through 2004 mean no real price relief for carnivores, even with greater-than-normal domestic beef supplies because of export constraints, especially to beefhungry Japan. That was offset by lack of Canadian imports.

Poultry: Broiler production has remained restrained despite huge demand increases, especially for that high-protein diet staple, boneless/skinless chicken breast. Since January, prices rocketed from about $1.50 to $2.40/lb., matching an all-time high. Turkey prices are also up, though not to historic levels.

Dairy: Less production— thanks to fewer animals—and greater Atkins-fueled demand have contributed to the escalation in milk, cheese and butter prices, even before the traditional fall peak season, though demand has been dampened somewhat lately because of the high prices. On the bright side, production is expected to recover this fall.

Why a Minnesota school district kicked a la carte to the curb
Dec 23, 2020