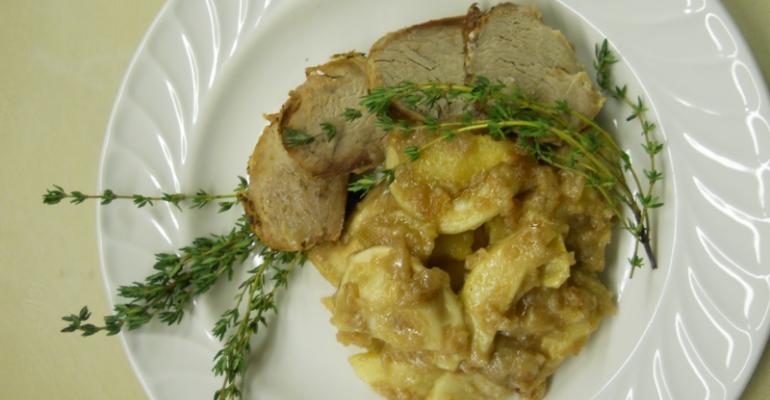 Something truly unique was needed to win this pierogi competition. Try the recipe: it pairs with pork as a side just as well as it does with ice cream as a dessert...

Eastern European in origin, pierogis are made up of warm potatoes and cheese nestled in a soft pasta shell. A Midwestern standby, pierogis are the bunny slippers of comfort foods, often just pan fried and served with sour cream, but not exactly the inspiration for a cutting-edge menu item.

And that sums up the challenge Eileen Goos faced upon entering the Mrs. T’s Pierogies recipe contest. The contest called for something new and different using pierogies as the main ingredient. It was open to operators from Cura Hospitality, the dining services provider where Goos is director of dining services at Phoebe Richland, a continuing care retirement community of Phoebe Ministries in Pennsylvania that offers short term rehabilitation and skilled nursing care.

Goos enlisted the help of Anna Siegfried, a resident, and together they came up with a savory-sweet and surprisingly trendy new dish: the Pierogi and Apple Bake, which won top honors in the recipe contest. A chef demo and interactive cooking activity for residents was part of the day when the prize winning recipe was revealed. Everyone got to try it, and reportedly loved it. 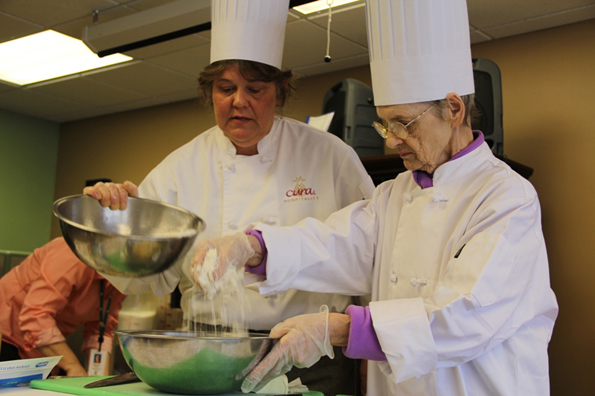 Creating the recipe was a lot of fun in and of itself, says Goos, who makes it a point to engage with residents and make them feel part of the community.

“My goal was to create something different, as well as incorporate a new recipe into a dining-related activity more conducive to senior socialization,” Goos says.

Goos and Siegfried tested several pierogi recipe ideas that ranged from Bananas Foster pierogies to Greek pierogies to Pennsylvania Dutch pot pie pierogies (all of which were pretty good, it turns out).

But the winner turned out to be a bake-until-bubbly concoction of flavors that naturally go well together: apple and Cheddar cheese. And it’s versatile, too, another thing that made the recipe a winner: This casserole would be equally at home as a side dish next to pork roast or on its own with a scoop of vanilla ice cream melting on top.

This contest, along with other activities throughout the year, dovetails with Cura’s LivingLife philosophy. According to Ms. Goos, “Through our LivingLife philosophy, Cura’s goal is to encourage residents to be involved and give them a sense of purpose and belonging, which helps to improve their physical and mental health.”

LivingLife strives to nourish, heal and uplift the spirit and body through food, personal service and memorable dining experiences. Based upon six dimensions of overall well-being including physical, spiritual, vocational, emotional, social and intellectual, these areas are used as a framework. 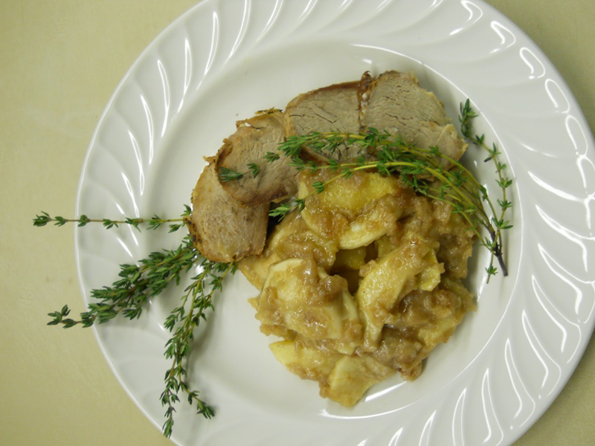 1.    Arrange apples in a 9x13” baking dish. Sprinkle with flour and sugars and cinnamon and toss until apples are coated; scatter butter cuts throughout.
2.    Toss frozen mini pierogies in butter, brown sugar and cinnamon and add to apple mixture and toss to spread throughout.
3.    Combine butter flour and sugar to make a crumb mixture spread evenly over the top of apples and pierogies and bake at 350°F for 45 minutes or until apples are tender. Serve warm with pork roast or on its own as a dessert.