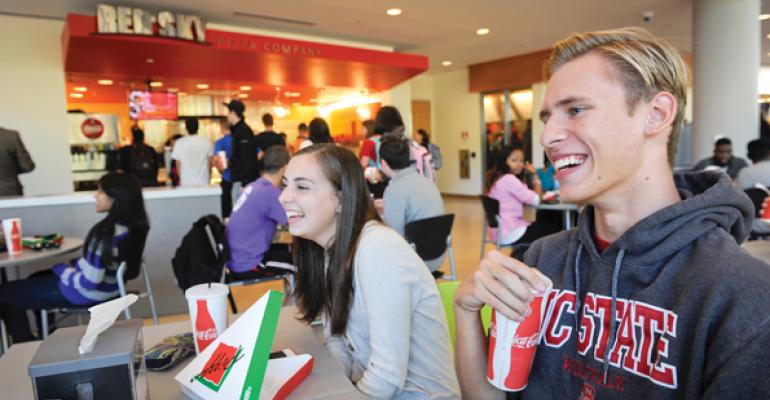 On October 23, North Carolina State Uni-versity opened the doors to the first phase
of its newly designed Talley Student Union.

The completed portions of the building include four dining concepts and a campus c-store called the Talley Market. That venue features grab-and-go meals, beverages, sundries and snacks, including vegetarian and gluten-free choices. It also incorporates a Howling Cow ice cream counter and Yates Mill Bakery menuing sweet cakes and other treats.

The dining locations are...

Jason’s Deli, featuring a selection of hot and cold sandwiches and wraps (including vegan and vegetarian choices), plus daily soups, sides and desserts;

Still to come are additional dining venues. One Earth World Cuisine, due to open in January 2014, features three stations with different international cuisines: Mediterranean, Asian and Global, the latter featuring an eclectic mix of flavors such as regional American, Latin and Caribbean.

1887 Bistro, slated for a January 2015 opening, will have  a small stage for musical acts, karaoke and open mic night, along with a flexible menu to complement events such as game-viewing parties and post-theatre dining (it will be located across from Stewart Theatre, the Grand Ballroom and other meeting spaces).

Other parts of Talley due to open in the coming months include Stafford Commons, the Senate Chamber, Wolf Xpress, a lounge and study space, the State Ballroom and lots of other meeting spaces.