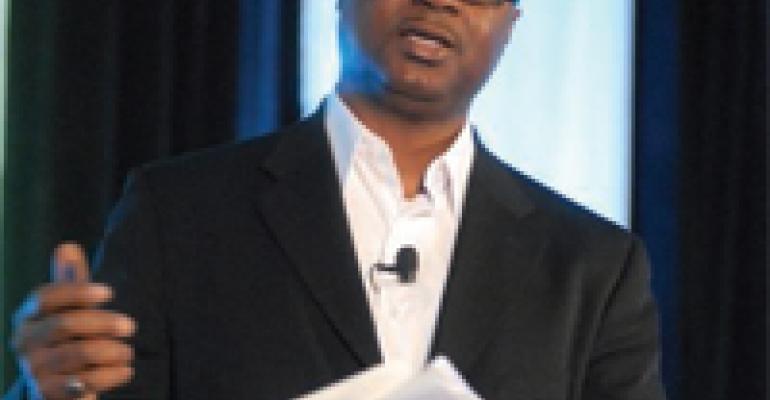 Neff, whose concept, brand, and best-selling cookbook Conscious Cuisine has been making menus healthier in many sectors for years, actually got his start in Chicago.

While working in some of the best area restaurants, Neff said he learned to “always offer more than the customer expects.”

Customers choosing something with reduced fats may not expect delicious flavor. This need not be the case, Neff said.

Food that is fresh, in season, less processed and unadorned with unnecessary fats and salt has flavor that speaks for itself. That, in a nutshell, sums up the philosophy of Conscious Cuisine.

“Instead of finishing sauces with butter, get the flavor out of a broth made from mushroom parts,” Neff suggested, also advising, “instead of making a roux, thicken with whole grains instead.”

Neff also suggested highlighting the vegetable part of the plate (such as local asparagus, root vegetables, or a mushroom risotto) and making the meat portion smaller.

Seasonality “allows me to use the foods that are most abundant and least expensive,” Neff said while describing a heart-healthy hospital menu that changes with the seasons.

Among Neff's other healthy-but-tasty foodservice tips: When tomatoes are out of season, roast them to get the most flavor. Serve green tea with mint and berries (this works especially well with seniors), tell them it's ‘refreshing’ now and tell them it's ‘healthy’ later. Make foods on a stick, like satay, for snacks, and call them ‘swords’ on the menu.”