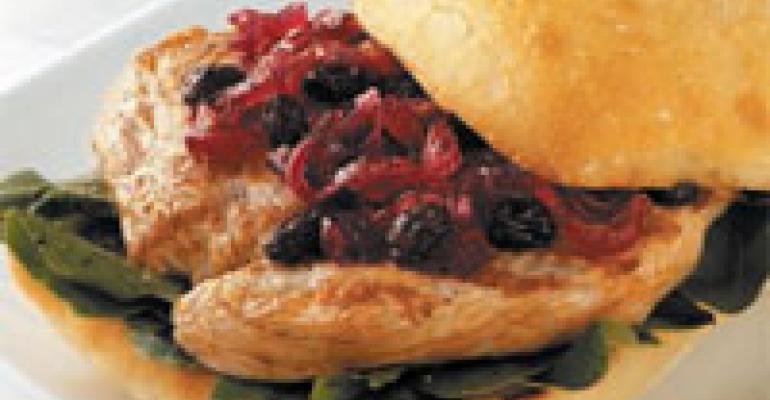 Turkey Cutlet on Ciabatta with Raisin and Red Onion Marmalade

1. Season turkey with salt and pepper. Dredge in seasoned breadcrumbs. In medium-hot sauté pan, add olive oil and sauté until golden brown on both sides (just a few minutes, since slices should be thin). Remove onto a platter lined with paper towels to absorb oil.

2. For the marmalade: combine onion, sugar, raisins and vinegar in a saucepot and bring to a boil. Lower heat and simmer until it reaches syrup consistency. Remove and chill.

3. To assemble: Cut ciabatta into equal portions matching size of turkey slices. On bottom piece of bread, spread a thin layer of marmalade.

4. Place turkey on top. Toss greens with a little olive oil, salt and pepper. Place on top of turkey along with other half of bread. Cut and serve.

Note: turkey can be grilled instead for a lighter option.