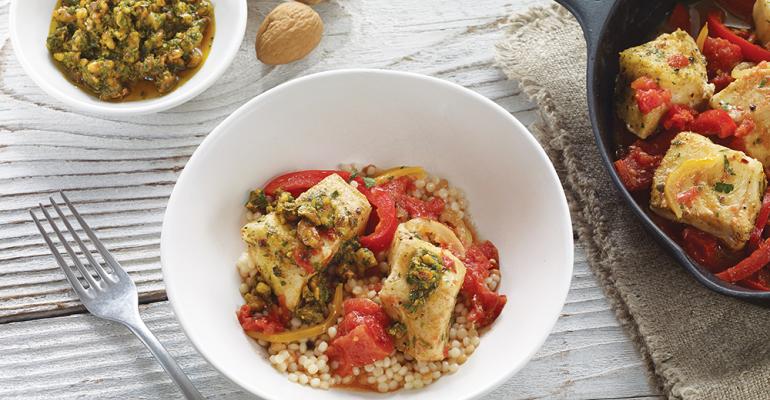 1.    In blender or food processor, puree cumin, paprika, turmeric, cayenne, garlic, cilantro, parsley, lemon juice, olive oil, ½ tsp. salt and ¼ tsp. pepper until smooth. Add the walnuts and set aside.
2.    Cut the fish into 2-inch pieces and place in a bowl. In a small bowl, mix together ¾ tsp. salt, ¼ tsp. pepper, cumin, red pepper flakes, lemon juice, olive oil, cilantro and garlic. Rub the fish with the mixture. Let sit in refrigerator covered for 1 hour.
3.    Combine tomatoes with ½ tsp. salt. Place half of tomatoes, half of the bell pepper and half of the preserved lemons on the bottom of a tagine or heavy stewing pot. Place fish on top. Top with remaining peppers, then preserved lemons and tomatoes. Bring to a boil over high heat, reduce heat to medium-low and simmer 20 minutes.
4.    To serve: Spoon the fish, vegetables and sauce into soup bowls and place a spoonful of the chermoula on top.