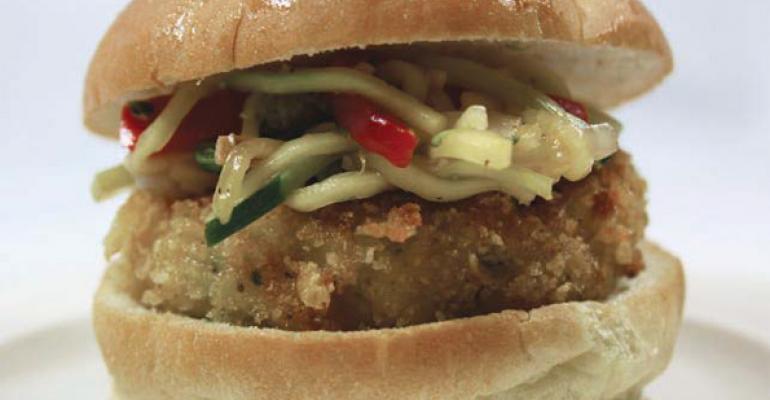 Sandwich of the Month: The Northeast Slider

This scallop burger brings a taste of the East Coast to the middle of Iowa—Iowa State University, to be exact. This fun seafood slider is part of a cool, modern regional-Americana catering menu.

The patties start with scallops—half whirled in a food processor and half chopped—bound together by egg and panko bread crumbs that have been fortified with the most Northeastern of all spices: Old Bay Seasoning. Then the sliders are topped with a simply dressed celery root slaw (apple cider vinegar, honey, mayonnaise) and a creamy sauce based on the herbaceous retro dressing, Green Goddess.

“The flavors on this slider were inspired by the city of Boston,” says Nolan N. Green, chef, Memorial Union Dining and ISU Dining Catering Program. “Day boat scallops with a light sear are what I think of when I think of the East Coast.”

The scallop sliders were part of a recent governor’s reception catered by ISU Dining, where food traditions from regions around the country were reimagined by Midwestern chefs and then celebrated on small plates.

The menu included a smoked brisket slider from the South that was glazed with bourbon-kissed honey; a Cheddar-stuffed beef patty from the Midwest; a Southwestern burger with Pepper Jack and corn salsa; and a West-coast hippie burger: a falafel patty with yogurt sauce on a whole grain bun.