“Patty never stopped putting her community and team first. She has been with Masonic Pathways for many years and continues to work with her co-workers and leadership to provide excellence in meal service through COVID and beyond.”

“Our cook, Cody, prepared a special breakfast for an assisted living resident for her birthday. He made her an omelet filled with her favorite fillings. He involved the servers in the dining room to sing "Happy Birthday" to the resident. This act of thoughtfulness truly made her day.”

“Scott was an integral part of the success of the operation when we were in transition of upper management. He was also a go-to person when we had to shut down again for COVID. Scott is always willing to do whatever it takes to make sure we have all the product we need to service our residents. Anything from multiple trips to Restaurant Depot, picking up will-call orders, and coordinating with multiple vendors. All in an effort to keep our residents happy. With all that going on, he was still able to maintain his daily job functions of managing the sanitation team, organize preventative and emergency maintenance, and assist in any prep needed in the kitchen because of multiple staff shortages due to COVID. We would not have been able to get through the last eight months without his dedication and hard work.”

“She ran her kitchen for almost a year without another supervisor or manager. She made sure her patients’ food was served at the right temperatures, ensured all patient food was accurate and correct on all allergies. Follows all ERC core values and make sure the client is satisfied.”

“In the last two critical years during COVID, Roger hasn't missed a single day of work. As we are currently staff-challenged, Roger has taken on extra tasks to help cover our services. He knows the residents well and alerts me if something is amiss. He's very reliable and never has to be reminded of what needs to be done. He's a real hero for us.”

“Salvador has worked for me for 13 years at Santa Marta, working six days a week, and we are his second job. He is an excellent cook, and I wouldn’t be where I am without his help. He not only makes his own food a priority, but he worries about other employees’ foods. Our residents are his main focus, and he wants every dish to be the best it can be.”

“Felice is a very dedicated employee. He brings knowledge of cooking to our facility. Staff loves to work with Felice. He is fun to be around and always has his music playing to motivate everyone. And he is an excellent role model.”

“Jessica is next level. She goes above and beyond every single day. Jessica worked straight for 43 days. She covers all positions when staff are out. Jessica puts resident satisfaction above her own needs and prepares anything that they ask for. A true Hero.”

“Chef John is a valuable resource for Brookdale who loves the hospitality industry and he partners with local farmers and vendors to not only help them but to use their products! He often gives back to the community and underserved urban areas. His passion shines through; with all his work he is deserving of this recognition!”

“Frank Pardi, operations manager for the St. Therese Villa continuing care facility in Lethbridge, Alta., Canada, was dispatched to nearby AgeCare Columbia Supportive Living Community in August 2021 to fill in for its operations manager, who went on leave. Shortly thereafter, he left an indelible mark on its residents, families and client.

Frank’s service excellence, interpersonal and people skills, as well as his outstanding work ethic, have prompted 33 residents to circulate a petition letter that calls for his position to be made permanent for six chief reasons, including that he knows each of them by name, demonstrates compassion and care, takes time out of his busy day to visit them and that he has become part of the ‘family.’

Said Rob Shea, AgeCare’s VP of support services & facility management, ‘I know Frank was intended as a temp measure but thought you should all see the attached [petition letter]. I think we are all in agreement with Frank in this role and hopeful that this could become a permanent situation. Frank, I am hopeful you are enjoying it at the site as much as the residents are enjoying having you there as well’

Adds Ian Mendoza, district marketing manager, Aramark Canada Southern Alberta, ‘Frank embodies our culture of hospitality. He sets the standard for our managers to follow. His coaching/mentoring of others has resulted in the promotion of a few staff members.’”

“Maria has worked as a housekeeper for her first few years with us, and her work ethic made her a clear choice when we needed to fill an entry position for closing cook. Maria caught on very quickly and learnt her role as closing cook quicker than an experienced cook has in the past. And she has gone above and beyond, working endless hours, sometimes weeks on end, to ensure our residents/fellow employees got a hot meal during COVID; never one to complain, Maria always has a positive attitude and is willing to do whatever is asked with a smile.”

“In the 2+ years of COVID, Chef Lalith (who is my breakfast/lunch chef) has not missed a day of work. He comes in on time and does a fabulous job making breakfast and lunch. The residents here adore him. He is friendly and follows my recipes exactly. Lalith is AMAZING!”

“Great mentor and chef moved across the country to take a building that needed to be restructured from the bottom up, and with all good intentions and amazing coaching skills brought back kitchen staff who had lost all hope and made Ventana beautiful again.”

“Kimberly Whitt goes above and beyond her job duties to ensure the food she serves is served with her personality and proper ethics. She makes sure her staff, residents, family and friends feel the love in her work!”

“The time and dedication planning menus and activities for the elderly.” 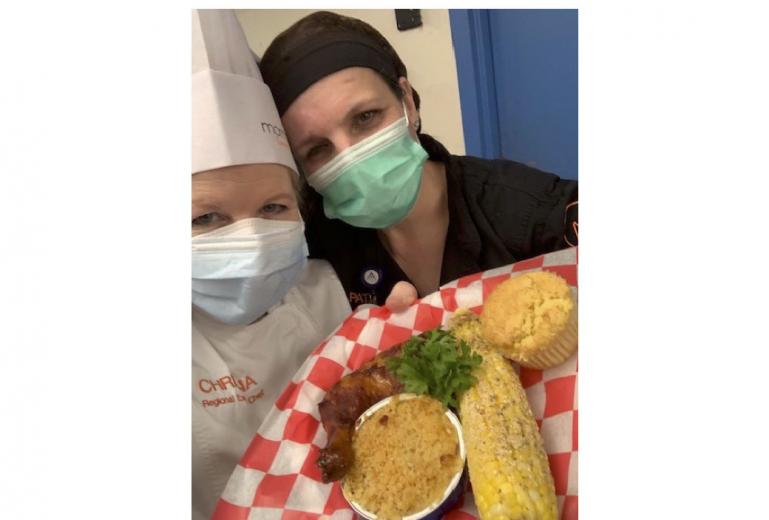