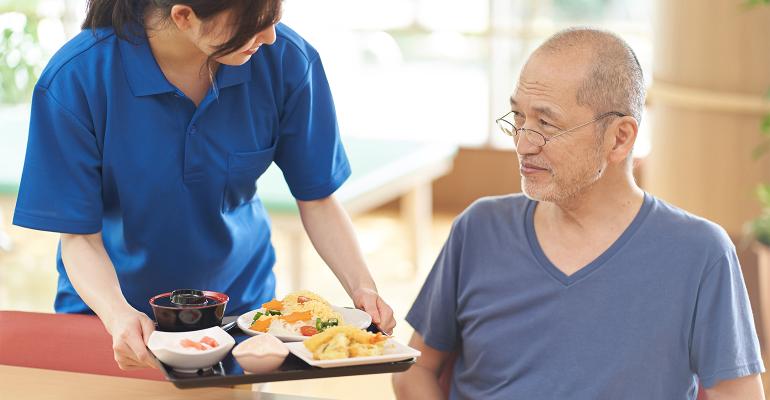 kazuma seki/iStock/Getty Images Plus
Residents in the community of 512 formed a dining services scholarship committee that raised more than $63,000 in the first six months of this year as part of what will become an annual campaign.
News & Trends>Senior Dining

This and a USDA report documenting a decline in food insecurity due to pandemic policies are some of the stories you may have missed recently.

Residents of the Masonic Village at Sewickley in Pennsylvania have come up with a novel way to address a staff shortage in the retirement community's dining services department: They gave $4,000 college scholarships to 11 servers. Residents in the community of 512 formed a dining services scholarship committee that raised more than $63,000 in the first six months of this year as part of what will become an annual campaign. To qualify, servers must have worked at least 312 hours, have submitted a short essay and application, and already have been attending or accepted to college. In the three months after the program was announced, five new servers were hired, as opposed to only one being hired in the previous three months.

Food insecurity for households with children declined to its lowest rate in two decades last year, according to a just released USDA report, as government assistance programs continued to blunt the effect of the coronavirus on the economy. The findings were in line with data last year showing that vast expansions of government aid helped reduce hunger, but experts warned that picture was almost certain to change as pandemic-era programs expire and inflation remains high.

Culinary medicine programs are emerging at medical schools to meet a critical need to improve nutrition education in an era of unprecedented diet-related health problems including obesity and cardiovascular disease, according to a review of programs by UT Southwestern researchers published in Academic Medicine, the journal of the Association of American Medical Colleges. The programs utilize teaching kitchens to give health professionals practical skills to help patients make evidence-based dietary changes while celebrating nourishing, accessible, affordable, and delicious food, said lead author Jaclyn Albin, M.D., Associate Professor of Internal Medicine and Pediatrics who leads the Culinary Medicine program at UT Southwestern.

The opening of Western Michigan University’s new student center will be delayed beyond the start of the spring semester, university leaders said. It’s the second announced delay for the opening after  officials said in June that supply chain issues and a tight labor market precluded a planned opening for fall 2022. In a recent letter to the campus community, administrators cited “uncertainty sourcing materials and competition for a limited pool of workers” as factors in an expected delay beyond the last-stated estimated completion date. The school had hoped for a January 2023 opening.