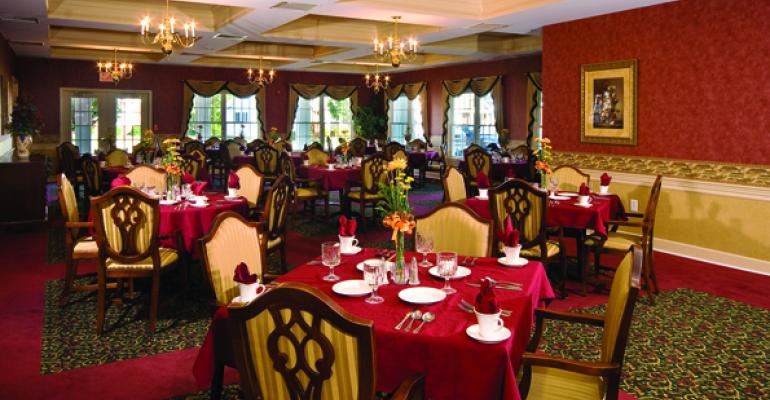 Independent living residents at Breckenridge can use their meal allowances in multiple dining venues.
News & Trends>Healthcare

Breckenridge Village includes a variety of living arrangements for residents ranging from independent living in ranch homes, brownstones and apartments to assisted living, skilled nursing care and rehabilitation services. There is also a building with subsidized apartments for seniors who qualify under HUD regulations. Here’s a rundown of the meal strategy for each level:

For those in the assisted living, skilled nursing and rehabilitation center, meals are simply provided as part of the program.

Those in the government-subsidized apartments participate in a dinner/meal program billed each month in addition to the monthly rent.

Independent living residents get a set meal allowance depending on where they live, although when the system becomes fully operational all meal allowances will be accepted in any campus dining venue. Currently, only the Grace Woods and Breckenridge Village North communities, located on separate campuses less than a mile apart, have the POS system that allows them to reciprocate meals across locations.

The allowances are $445 a month at the Breckenridge Village North Apartments, which can be used in the Greenhouse Dining Room at the site or in the River's Edge Restaurant at Grace Woods.

Residents of Grace Woods, the newest development at Breckenridge, have meal allowances based on the building in which they live: $300 a month for River’s Edge, $200 for Woodland Ridge and $100 for The Landing. The allowances can be used in both the River's Edge and the Greenhouse.