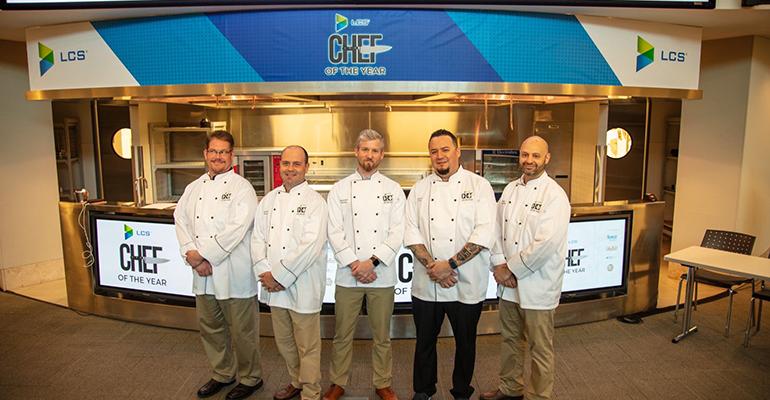 The competing group included (l-r) Eric Sayers of The Cypress of Hilton Head, S.C.; Jonathan King of The Heritage at Brentwood in Tennessee; Matthew Bishop of Bayshore Memory Care in Naples, Fla.; Michael Aviles of University Village of Thousand Oaks; and Hagop Hagopian of The Clare in Chicago (who won the competition).
News & Trends>Senior Dining

Michael Aviles brings a fine-dining background, a sense of humor and an inclusive leadership style to University Village of Thousand Oaks in California.

Senior dining chef Michael Aviles was one of five chefs chosen out of 140 senior living communities nationwide to compete in the Life Care Services (LCS) Chef of the Year Competition, a “Chopped”-style contest complete with mystery basket ingredients.

Although Aviles didn’t win the competition (he was derailed by some forbidden rice that he couldn’t resist adding to his entrée but took long to cook properly), Aviles says the group of Life Care Services chefs from across the country were all great to work with, making the day “more fun that cutthroat.”

Part of Aviles’ application was a fun video he submitted to the judges, featuring lots of his team members. “We like to have fun here,” he explains. “Just razzing…but camaraderie. The companywide goal is to work as teams and give recognition to team members.”

While he was born and raised in Ventura, Calif., he cut his culinary teeth on the East Coast, at a restaurant he founded, the now-closed Amici’s in Landenburg, Pa., which won over one of the area’s toughest restaurant critics. But life led Aviles back to the California, and after bouncing around a few more kitchens, he found his current job at University Village of Thousand Oaks and hasn’t looked back since.

What’s made his experience so positive, Aviles says, has been teamwork. 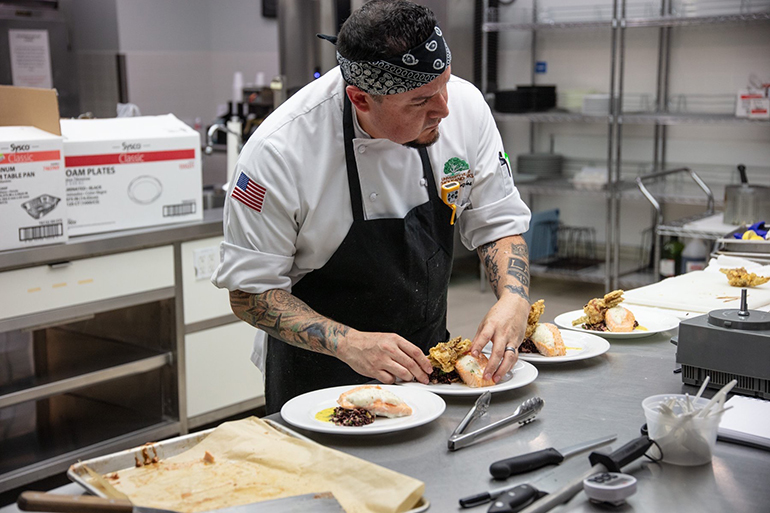 Michael Aviles, who competed in Life Care Services’ Chef of the Year Competition, leads his senior dining crew with camaraderie and fun to help face challenges.

“Some of our chefs come from a noncommercial background where they’re used to doing 500 covers and others come from fine dining, so we have it all,” Aviles says, relating a story about one employee who started at University Village with no experience at age 16 who has gone on to work in the industry and is now returning in a new position, brining even more youthful energy to feeding seniors.

Aviles and team serve about 500 meals a day to independent living seniors who reside in villas. While many residents are classic “meat and potatoes” seniors, some have more adventurous tastes, and all have been introduced to quite a few new flavors and menu items since Aviles started.

“We’ve tried Indian, Cajun, Creole, sushi, pho…banh mi…but the meatloaf will always be the most popular,” Aviles says. “They love the comfort foods like fried chicken and pot roast.”

The residents also have been made to feel part of the team when it comes to menu planning. One of the first changes Aviles made was changing the menu cycle from a six-week cycle “that a lot of retirement communities operate on,” he says, to a more flexible—and less wasteful—menu with about 10 rotating items and favorites available every day. 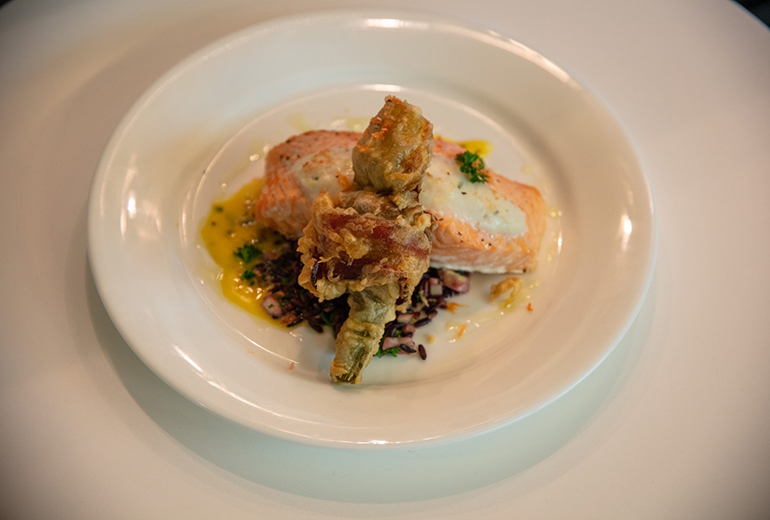 Aviles’ dish for competition combined mystery basket ingredients salmon, artichokes, grapefruit and fennel. Aviles was leading the pack by expertly breaking down a whole salmon and things were going well until he decided to add forbidden rice, which takes too long to cook and ended up too “al dente” for the judges.

“Our residents had commented that if they missed Tuesday, they’d have to wait six weeks to have calamari again, for example,” Aviles says. “The menu is all their favorites now. They could have meatloaf three days a week if they were feeling it.”

The daily selection of housemade desserts have also increased, an important part of senior dining, since the sweet taste is one of the last to fade, as Aviles has found in research on aging and tasting.

“We increased desserts from two selections to five, and we always have a composed fruit dish that’s a fun challenge each day for the pastry chef,” Aviles says, adding that desserts range from light and healthy to “I’m gonna enjoy life” varieties, a balance senior dining pros strive to hit every day.

Seating and serving style continue to be challenges for the team.

“Because of the size of our [main] dining room, we can seat about 71 tables and do maybe 250 covers [per seating] but the biggest challenge is the seating arrangements,” he says. “The residents don’t like to wait, so we seat them as they come in, creating a strain on the kitchen and servers.”

That challenge is a work in progress, Aviles says, one that he plans to meet one day a time.

This article has been corrected from its original version, for a factual error.
TAGS: Healthcare
0 comments
Hide comments
Related

Stories from the front lines: Sodexo’s new senior dining CEO on starting a job before the coronavirus struck
Jul 07, 2020