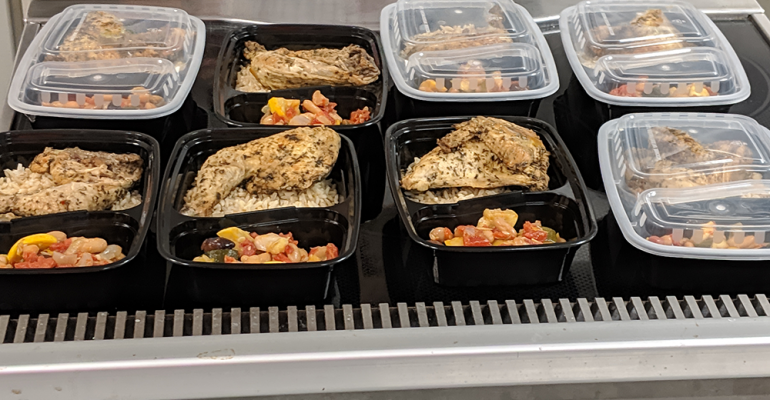 Morrison Community Living partners with local university to help seniors on waitlist for Meals on Wheels.

Meals on Wheels in Jacksonville, Fla., is does great work, but it turns out there’s a long wait list for hundreds of area seniors in need of food delivered to their homes. This is where Meals on Wings has swooped in. It’s a collaboration between the Brooks Bartram skilled nursing facility’s Morrison Community Living foodservice team and the nearby University of North Florida (UNF).

“The last two dietitians that we hired were graduates of UNF, so when we were brainstorming ways to get quality employees to our locations and the idea to speak with one of the classes came up as a recruiting technique,” says Meghan Clark, CDM, CFPP, director of dining services at Brooks Bartram.

This relationship with the university’s nutrition program led to more recruits and more brainstorming.

“Last year one of my managers, also a UNF graduate, wanted to do a food donation as a community outreach project and we did a quick two-day collection,” Clark says, “That led to 74 meals donated in just a short time frame.” 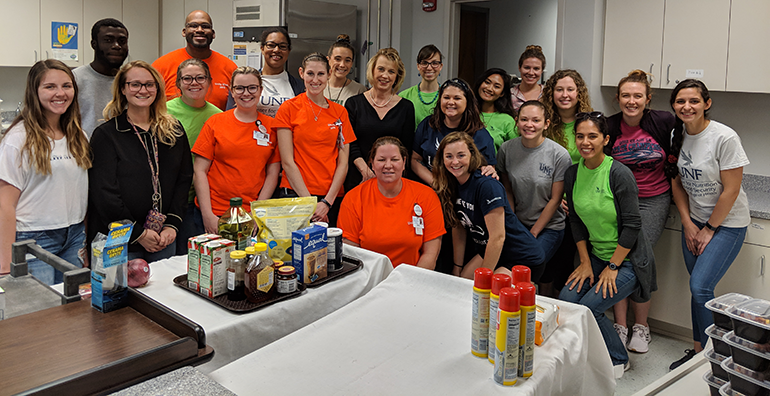 Clark was shocked to find that more than 900 seniors in the area needed Meals on Wheels but were on a waitlist, even more so because of her line of work in nutrition for the elderly.

“I see day in and day out how quality nutrition plays a key role in the wellness of our residents, so to think that there are seniors out in the community that may not know when their next meal is, or that isn’t getting a well-rounded nutritious meal was heartbreaking,” she says.

UNF’s nutrition department’s Meals on Wings serves that waitlist, so Clark decided to join forces. The full-on partnership began at the beginning of this year. Now, the program is happening every day at Brooks Bartram, with a typical day looking like this: The Brooks Bartram team collects leftover/unused food from breakfast, lunch and dinner. “We are currently using remaining hurricane supplies,” Clark says. “We have a ton from the last two hurricanes that hit our area.”

The leftovers are parceled into starch-veg-protein combos then labeled and placed on racks in the walk-in. Every Tuesday and Thursday, UNF nutrition students pick up the food and bring it to UNF, where it’s distributed to the seniors in need, and also to Mission House and the Florida AIDS Network.

Thanks to the Bill Emerson Good Samaritan Food Donation Act, which encourages the donation of food to nonprofit organizations, neither the senior dining facility nor the university has to worry about lawsuits.

Staff was trained on proper labeling procedures and a table near the front of the kitchen is where hotboxes are emptied on the way to the dish line. 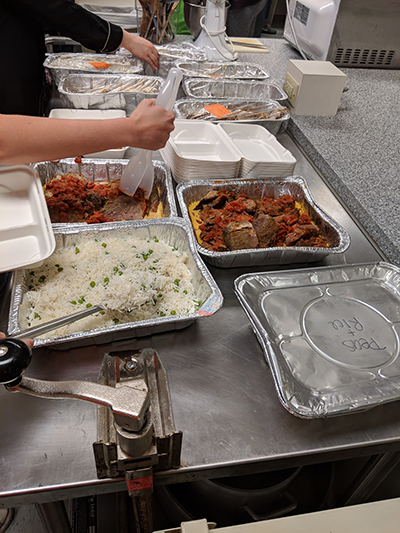 “Initially it was difficult to get everyone on board, but now it’s just a step in their workflow processes and really requires very little time on our end,” Clark says. Meals on Wings has already had its state survey for 2019 and was found to be deficiency free in terms of safety and labeling, “and I want to make sure we keep everything state ready every day.”

Examples of meals that have been successfully saved and transported in aluminum pans include meatloaf, mashed potatoes and peas; chicken, rice and mixed veggies; chicken, biscuit and oatmeal; and chicken, biscuit, hardboiled egg and potatoes.

Unfortunately, one item seniors love—soup—doesn’t work with this program; it’s just too tough to transport, the group found out early on.

Reducing food waste and making a positive impact on the community is important at Brooks Bartram and also to Morrison’s parent company, Compass Group. Clark says Meals on Wings is playing a big part in that.

“I think for Morrison Community Living, a sector of Compass Group, it is our duty to really look at ways in which we can stop food waste and be valuable members to communities we serve,” Clark says. “Our purpose is to ‘Enrich the Lives of Seniors Everyday’ but that doesn’t stop at the front door of our accounts…we have an abundance of food not being fully used…it’s a priority to stop food waste but minimizing production won’t fully solve the problem.”

Donating leftovers “ensures that the minimal amount of food ends up in the trash,” Clark says. “Partnering with UNF and Meals on Wings ensures that the population whose lives we want to enrich are benefiting through a delicious meal…it’s an opportunity to do something for the senior members in our community.”