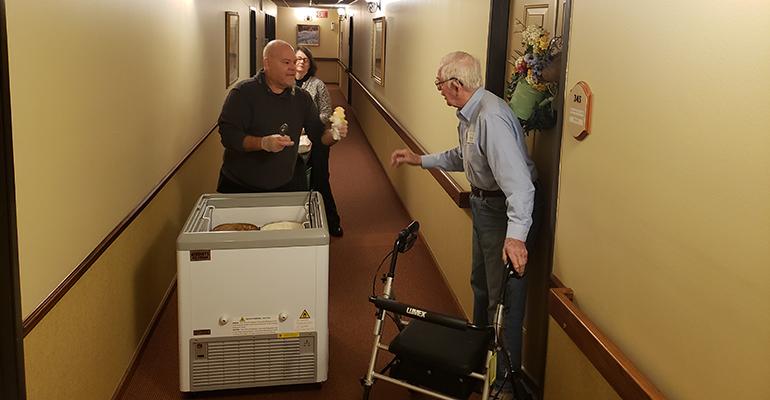 When the Heritage Community of Kalamazoo went into lockdown, the culinary staff got creative in order to meet the needs of its 400 residents. To make them more comfortable, deliver fresh meals, and promote community connections during the most restrictive months, they slimmed down their menu offerings and offered special snack deliveries.

As the pandemic intensified, the staff at this continuing-care retirement community in southern Michigan planned for major disruptions, such as extending their three-day emergency heat-and-serve meal plan to 10 days, in case the entire kitchen staff was out.

Related: One On One With: Kendal’s new a “zen-inspired” senior community will feature partnership with noted veg restaurant

But, says Mark Hudgins, director of dining services, their fears never materialized. Other than the high cost of disposable gloves and to-go boxes going periodically out of stock, the kitchen experienced few disruptions in the supply chain last year.

Instead, the biggest challenge during the crisis was delivering meals at temperature.

Related: 19 Senior Dining Foodservice Heroes who made a difference over the past year 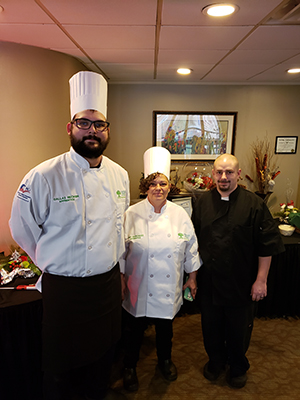 Photo: During the most restrictive months of the pandemic, they slimmed down their menu offerings and offered residents special snack deliveries.

They cut back menu choices from 20 items to around five. A curtailed menu made the new system doable for the staff; a rotating the menu made it more interesting for the residents. Menu items included sandwiches, salads, burgers, chicken dishes, and fish entrées.

At first, the culinary staff prepared meals in batches of 10 or 15 meals at a time before making a delivery run. But in disposable packaging, the food was cooling down too quickly. So they started preparing just four or five meals at once before delivering them to residents’ doors.

The extra staff time, Hudgins says, was worth it. “Food is a key factor in people’s lives here.”

Special snack boxes gave residents tasty bites during the height of the lockdown and also functioned as an important opportunity for staff to make person-to-person connections with individual residents. Snack themes included pretzels and beer; wine and cheese; cookies; and popcorn. 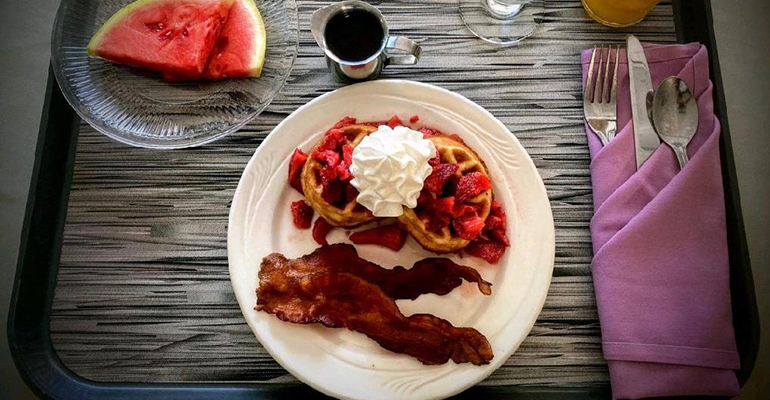 Now that almost all residents are vaccinated, the kitchen is reviving their omelet, waffle, and pasta stations.

Hudgins has been at Heritage Community for almost a decade. During that time, he shepherded the kitchen from a managed to a self-operated model, emphasizing scratch-made, restaurant-style meals. Hudgins holds a degree in hospitality management and worked for many years as a chef at country clubs and casinos. He considers area restaurants to be their (friendly) competition and is proud of the quality of the meals they serve—as well as their award-winning performance at local competitions.

The Heritage culinary team creates menus by combining Hudgins’s restaurant-influenced approach with the staff’s knowledge of resident preferences. They also take local produce into consideration: during the harvest season, they purchase between 10 and 15 percent of their produce from local farms. It’s not unusual for the kitchen to have items such as local tomatoes, beans, melons, potatoes, squash, or apples on hand. They even have local smoked ham hocks on occasion.

Hudgins is continuing to strengthen the program through on-site culinary training through a two-year apprenticeship program, one of just three approved by the American Culinary Federation in the state. It’s open to Heritage employees who have worked as a cook in their kitchens for at least one year. Participants attend a six-hour class once a week for the duration of the program.

“A lot of places, like restaurants, teach you what they need you to make. They don’t teach you to make bread if you’re never going to make bread,” Hudgins says. “Here, we teach the whole gauntlet of culinary.” 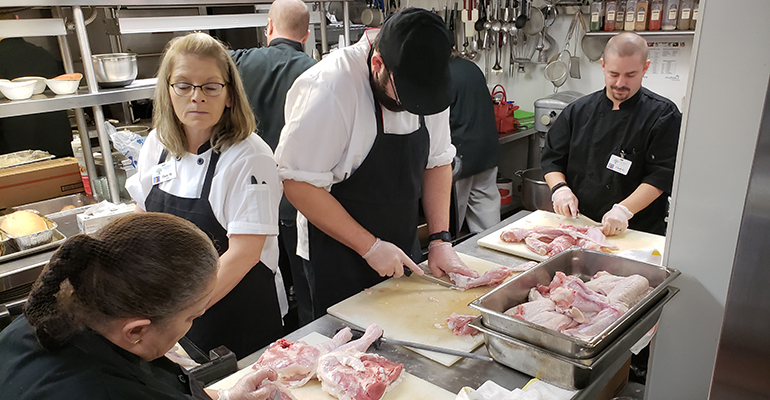 Through their on-site culinary apprenticeship program, Heritage grows their own talent and helps employees advance their careers.

Apprentices receive front-of-house training and learn ingredient preparation techniques, cooking, baking, menu development, and more. Hudgins’s vision is to develop their own talent and give culinary employees a path to gain culinary expertise and an opportunity to advance their careers. Already, one graduate of the five-year-old program has advanced to a managerial position and two apprentices have moved up to sous chef.

The program is good for staff members and for the culinary team, but it’s also a good tool for recruiting new residents, who look for holistic wellbeing—including high-quality food experiences—when they’re deciding on a retirement community.

Now that about 98 percent of Heritage residents and 65 percent of employees are vaccinated, Heritage is seeing an uptick in dining room attendance. They’re bringing back the action stations that went on hold last year, such as their omelet, waffle, and pasta stations.

Even if it’s a slow return, the staff is looking forward to making memorable meals.

“We’re just really excited that we’re able to make high-quality food [for our residents],” Hudgins says. Even when the lockdown fades away, “a lot of people won’t have the luxury of going out. We want to continue to bring those flavors here, to Heritage.”