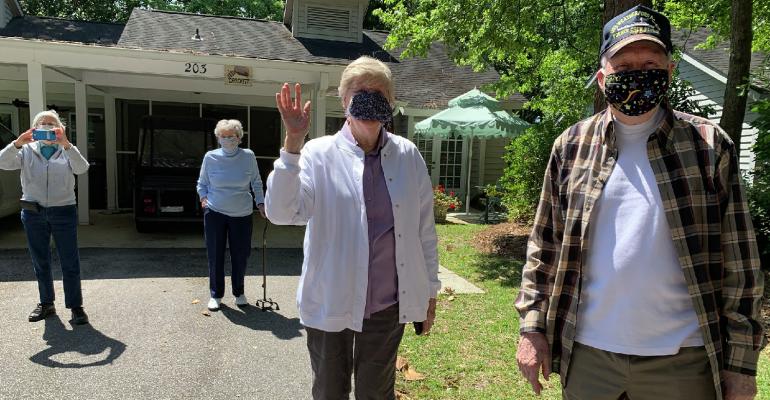 Chef Eileen Goos and friends at the outdoor version of her new live-streaming cooking show, a way for the dining team to connect with senior residents during the coronavirus crisis.
News & Trends>Senior Dining

Cooking with Eileen is a new series that uses technology to stay connected to an isolated population: senior citizens.

A new live-streaming video series is keeping seniors hungry for new experiences even while isolated while the COVID-19 lockdown continues at Presbyterian Communities of South Carolina at Summerville, a CCRC served by Cura Hospitality, part of Elior North America.

Cooking with Eileen is the creation of veteran senior dining chef Eileen Goos, CDM, CFPP, director of dining at Presbyterian Communities. Through the in-house TV channel, residents can tune in and watch demonstrations on nutritious, delicious new dishes, which are then available to eat. Cooking TV doesn’t get much better than that!

Related: The road ahead for onsite dining: Senior dining

In a recent episode, Chef Eileen draws in viewers right away, with a friendly demeanor and a promise of samples or grocery orders of a heart-healthy new entrée, tuna-avocado salad. “It’s something we don’t normally have on the menu, and it’s for heart-health benefits,” she says at the start of the video, just before opening a giant can of tuna and dicing a red onion, complete with knife-safety reminders for the seniors cooking along in their apartments.

The tuna-avocado salad, which calls for tuna, red onion, colorful bell peppers, avocado, lemon zest and olive oil, was the first of the video series, airing in late March as a response to the closed-in feeling due to closed common areas and dining rooms.

Right away, feedback from residents was positive.

“We did a resident survey of what they liked best about Cooking with Eileen, and while residents enjoyed the show, they especially loved the nutritional benefits that I provided,” Goos says.

From there, the show has been off and running with demos for pork tenderloin and sautéed spinach, fried chicken (the viewers’ favorite show so far) and all-American cookout fare, which was filmed outside. Goos uses the show as a test kitchen, and she says the pork tenderloin will be on the menu when dining rooms can reopen.

And she’s also finding her Southern food footing throughout the videos. Prior to coming to the Summerville community, Goos managed the foodservice for Cura at St. Anne’s Community and Phoebe Richland, both in Pennsylvania. The move to South Carolina has been full of culinary discoveries for Goos.

“Preparing fried chicken is a two-day process,” she says. “Together with my cook, Derrick Drayton, we brine the chicken and let it soak overnight in buttermilk. The next day we drain the chicken, bread it and then deep fry it in canola oil.” Fun fact: She was surprised during filming by an activities staff member who showed up in a chicken costume.

Taking the show out of the kitchen for a new episode that will run in several segments over several days, Goos live-streamed a good-old fashioned cookout from a flat-bed trailer the team tricked out with red, white and blue streamers and balloons.

After residents see the cookout on their televisions, they can venture out to the front porch and—keeping a safe distance—get their own plates of grilled burgers, hot dogs and corn on the cob. “Since we can only hit a little bit of the campus at one time, the event will take us three weeks to travel through the entire community,” Goos says.