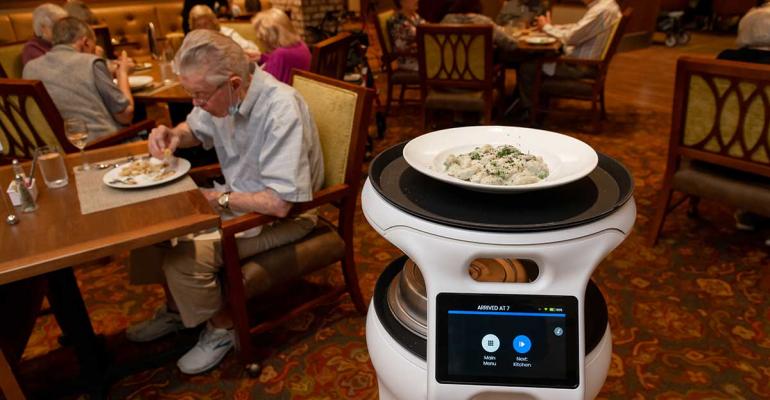 In September, diners at The Homestead, one of four dining venues at Springwell Senior Living Community in Baltimore, started receiving meals via robot. The facility is the site for a pilot project by Culinary Services Group that’s testing robots to ferry food from the kitchen to tables. Imagine a multi-tiered, wheeled cart carrying plates of pineapple chicken stir-fry and gnocchi with pesto cream sauce and you’ll get the idea.

Carolyn Wescott, director of innovation for Culinary Services Group, says they launched the pilot to test the first model in September. In January, they will test another. This is the group’s first foray into service robotics.

Culinary Services Group needed a specific type of location for the pilot. The Homestead’s dining room fit the bill: it is on one level (the robots cannot navigate thresholds, ramps, or elevators); it has just 19 tables in the main area and another six in an adjacent pub, few enough for one robot to service; and it is located near Culinary Service Group’s headquarters, allowing them to monitor the project in person. And, Wescott adds, Springwell is a forward-thinking facility that was willing to try something new.

They use the robot for all three meals in a venue that’s busy all day. They run a three-hour breakfast service, two-hour lunch service and two seatings for dinner and serve between 100 and 110 residents and guests daily.

Photo: The Homestead has 19 tables in the main area and another six in an adjacent pub, few enough to be served by one robot.

With all of this activity, you might think a collision is inevitable. But they haven’t had any incidents. The robots are durable and use advanced, 360-degree sensors to stop or alter their path to avoid colliding with a person or object. Still, they don’t use the robot for precarious items, such as a very full bowl of soup.

The Homestead’s chef manager, Gerard Campbell, says once the machine is up and running there’s little management. They simply load it with meals throughout the day and charge it after dinner service. One charge gives it enough power to make it through a 12-hour shift. The robot the group tested in September, the Servi by Bear Robotics, plugs into a wall outlet. The one it’s testing in January, the Matradee by Richtech Robotics, glides onto its own docking station. Each company provides maintenance and software support.

Staffing needs prompted the development of the pilot, Wescott explains. “[Food service has] always been a highly fluctuating environment, even more so lately,” she notes, referring to the struggle to find and retain staff during the pandemic.

The hardest dining role to fill at the facility is a part-time staff person to deliver meals and bus tables. Without consistency in this role, the dining team has had to pull other staff members away from their typical duties.

Once Culinary Services Group introduced the robot, the sticky staffing situation disappeared. Without the burden of table delivery, staff members were able to spend more time actively engaging with residents or preparing food in the kitchen. “It really helped us out,” Campbell says.

Wescott notes that though the machine replaces one part-time worker, the company didn’t take anyone off the schedule in order to make the change. She also says they will approach any future robot service based on the needs of residents. “We plan to keep our current staffing model intact but elevate our service abilities,” she says.

The robots are a pretty flashy technological push, but they also plan the continued introduction of well-established technologies in the context of senior services dining, such as remote temperature monitoring and other automated services. They are also looking to expand bedside ordering so residents can place meal orders via app or touch module. 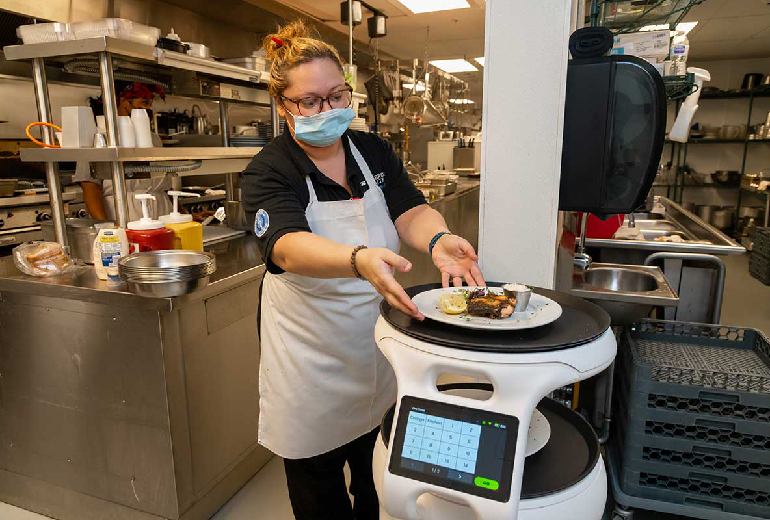 The struggle to consistently staff a part-time service position prompted the development of the pilot. The introduction of the robot has allowed staff to focus on their primary tasks more consistently.

As far as the future of service robots in their other facilities, Wescott says once they will assess future possibilities once they choose the best model for their needs.

So far, they’ve identified at least four locations other than Springwell that are potential candidates for a service robot. As they go forward, they will base recommendations for service robots on two things: the presence of physical barriers—such as challenging floor transitions, elevators or security doors—and the willingness of a location to try the new technology.

“We won’t take an approach of deploying service robots as our standard of practice just yet,” Wescott says, “but I could see that in the future.”