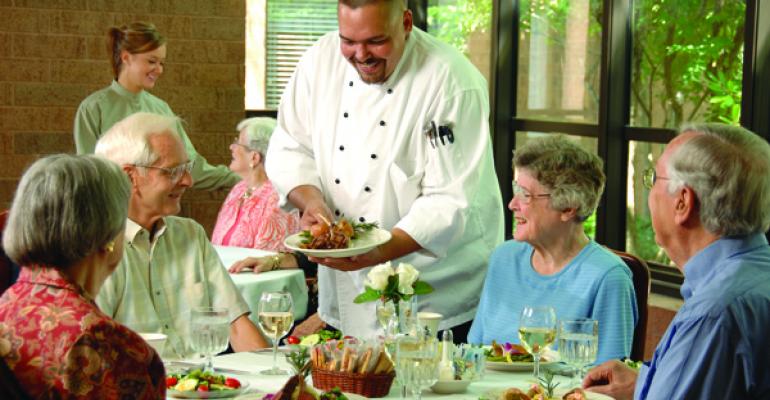 At the Ohio Presbyterian Retirement Services (OPRS) community Breckenridge Village in Willoughby, OH, about 20 miles east of Cleveland, the dining services are varied, diverse and tuned to the needs of the population. From traditional congregate meals and bedside tray delivery to casual bistros and all-day snack and take-out options, residents enjoy food services in a way that fits their lifestyles and preferences.

One of 11 communities and service locations operated by OPRS across Ohio, Breckenridge has around 600 residents in independent residences and assisted living, as well as in rehabilitation and skilled care services at its Fairmount Health & Rehabilitation Center.

The meal plan strategy for residents in Breckenridge's various independent living residences resembles the approach used by many college dining programs, offering a flexibility that allows residents to choose a plan that reflects their preferences and usage needs (see p. 30 for details).

But this is the senior dining wave of the future, and OPRS exemplifies the way senior care services providers are rising to the challenge. 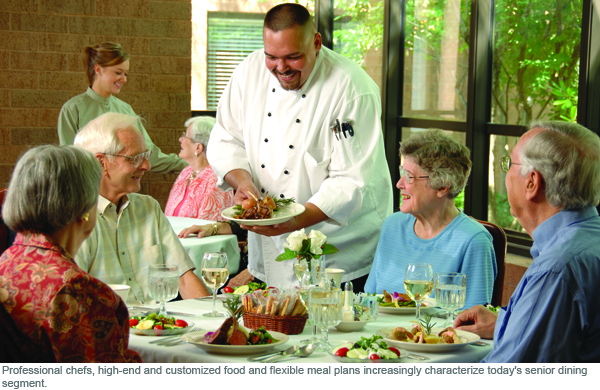 "We must prepare now for generational turnover that is changing customer expectations," says OPRS Director of Culinary & Nutritional Services John Andrews. Looking at the program at Breckenridge, one can see what he has in mind.

Changes in the Culture

The "changing customer expectations" Andrews cites are documented in a recent senior living survey that found that flexible dining plans are steadily replacing meals-per-day programs at independent living communities. It also shows that the number of plans offered per venue is also expanding.

In fact, a third of the respondents to the survey indicated that they would be changing to flexible spending or adding flexible
spending within the next year.

Further, the research shows that senior living operators' dining options offer varied types of service across the day in increasingly creative ways, as well as through unique venues branded to appeal to a particular community’s culture and population. 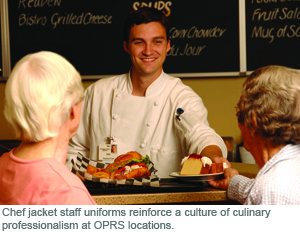 The expansion of meal plan options—something that mirrors what is happening in the college segment—caters to the type of seniors driving the segment’s growth. Today that includes the first-wave baby boomers who have lived their lives in a demand-focused commercial environment where “have it your way” is not the unique marketing position of a single company but the default approach of just about every product and service provider.

Several other results to note from the research:

• “rollover” options and usage flexibility are increasingly important factors in the design of meal plans, and

Not Your Grandfather's Dining Program

When Andrews was charged with upgrading the dining program for OPRS several years ago, he set a number of broad goals:

• position the department as more of a “lifestyle provider”

• make changes in a way that accommodates diff erent populations; and

• differentiate OPRS from the competition.

Step one was a simple rebranding initiative. Note that Andrews’ title includes the word culinary and omits anything resembling dietary or dietetics. e nutritional services part of his title indicates that this area is still a focus of his department’s responsibilities—it could hardly be otherwise—but the word nutrition has a more positive ring for today’s ears, and culinarypractically sparkles with Food Network style cache. 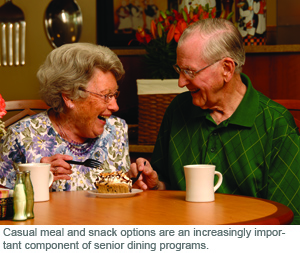 Andrews has worked hard to establish a strong culinary foundation at OPRS. The Culinary School and Hotel/Restaurant Management graduate (who also holds an MBA) made training an integral part of the program with the OPRS CulinarySkills Builder Academy where company chefs—all professionally trained—conduct more than two dozen diferent classes for staff on various cooking methods and other topics critical to first-class foodservice operations. The Academy makes use of instructional DVDs as well as hands-on training.

Andrews also implemented cosmetic but high-impact changes such as staff uniform standards to project the culinary professionalism the organization strives to instill.

The Breckenridge Village dining operation exemplifies the new approach: the department is managed by Director of Culinary & Nutritional Services Michael McDonald and Assistant Director Ryan Wagner. Wagner is a graduate of the Pennsylvania Culinary Arts Institute and has an extensive background in executive club restaurants and resorts, while McDonald is a New England Culinary Institute graduate who also holds an MBA. Rounding out the team is Princess Britton, the Campus Director for Culinary and Nutritional Services, who oversees all the licensed areas.

Also key to the program is the POS program, a pay-as-you go system that allows both greater fl exibility and convenience for residents and better effi ciency for staff . Once fully implemented it will allow residents to use their meal allowances across multiple venues just as many college meal plan programs don't tie students to a single dining hall but off er the flexibility to use their plans in select retail locations. It's already in full use at Breckenridge and its nearby Grace Woods campus, where independent living residents of both locations can use their meal allowances at dining venues at either site.

"The meal allowances for independent living residents at-Breckenridge are based on a declining balance format that poses a financial challenge to operators used to the more traditional structures, Andrews explains.

First, he says, there needs to be a mandatory buy-in level tied to each resident’s housing plan. "When buy-in levels have some mandatory component to them, we can begin to develop a revenue model based on the requirements of the mandatory component," he explains. "You need to track census figures in each specific building to determine your potential stream of revenue deriving from the plan the residents are required to have."

Costing Out the Program

There are a number of ways to calculate the fixed costs of debit meal plans in order to determine what to charge, and in the way Andrews evaluates these, one sees the same dynamic analysis undertaken by college FSDs when they approach meal plan design. "You need to calculate what costs are fixed, what are 'quasi-fixed' and what are variable," Andrews says. Once this is determined, there are several options.

“First, you might subtract all fixed costs from the plan purchased and leave only the food cost variable in the plan,” he explains. “In this scenario, you usually price your menu based on food cost alone. All other costs are already accounted for. You maintain a retail pricing structure for guests and nonresidents.

“Second, you may wish to charge a fixed price for the meal—say $3.50 for breakfast, $5 for lunch and $7.50 for dinner. In that case, you load the entire amount of the plan’s value onto the card. You also most likely would have a set of rules governing meal plan changes, refunds, resident moves, etc.

“Third, you need to carefully evaluate the effect of losing the ‘missed meal factor’ on any change you make to your meal plan structure. In the traditional meal plan structure, for example, a brunch plan may sell for $25 a week, or $5 a meal, so your revenue per meal at 100% participation is $5. But if your participation is only 65%, or 3.25 meals a week, then your revenue per meal rises to $7.69.

With a debit plan, there is no missed meal factor, which means you have to be very careful in determining your pricing structure. All menu items need to be properly costed and priced to the budgeted food cost percentage.”

Debit plans are a “sign of the times,” Andrews concedes, a necessary concession to the demands of today’s customers for greater choice and flexibility and a must if an operator is to compete successfully against other facilities and against the street.

The challenge, Andrews says, is that such an approach opens up more venues to allow the resident access to more options than we have traditionally offered. "This can increase your operating costs."

This of course is the same dynamic with which college operations struggle, one that demands a careful balance between customer-friendly choice and economies of scale