The balance between creative food and comfort food Chef Ian Thompson, a Cleveland culinary veteran Getting to know the community

The menu challenge for an open-to-the-public fine dining restaurant inside a senior dining community is striking a balance between comfort and creativity. The challenge has been met by Ian Thompson, newly appointed executive chef for at South Franklin Circle, one of the senior living communities operated by Judson Services Inc., a Cleveland-based organization that’s been serving older adults in Northern Ohio for a century.

Thompson’s answer is to keep the menu “perpetually fresh and fluid” at the 60-seat restaurant, Radius, a part of South Franklin Circle in Chagrin Falls, OH, a new location for Judson.

“It’s of the utmost importance to keep the menu moving,” says Thompson, who has worked in some of the best restaurants in Cleveland, OH, including fire food and drink and Parallax. 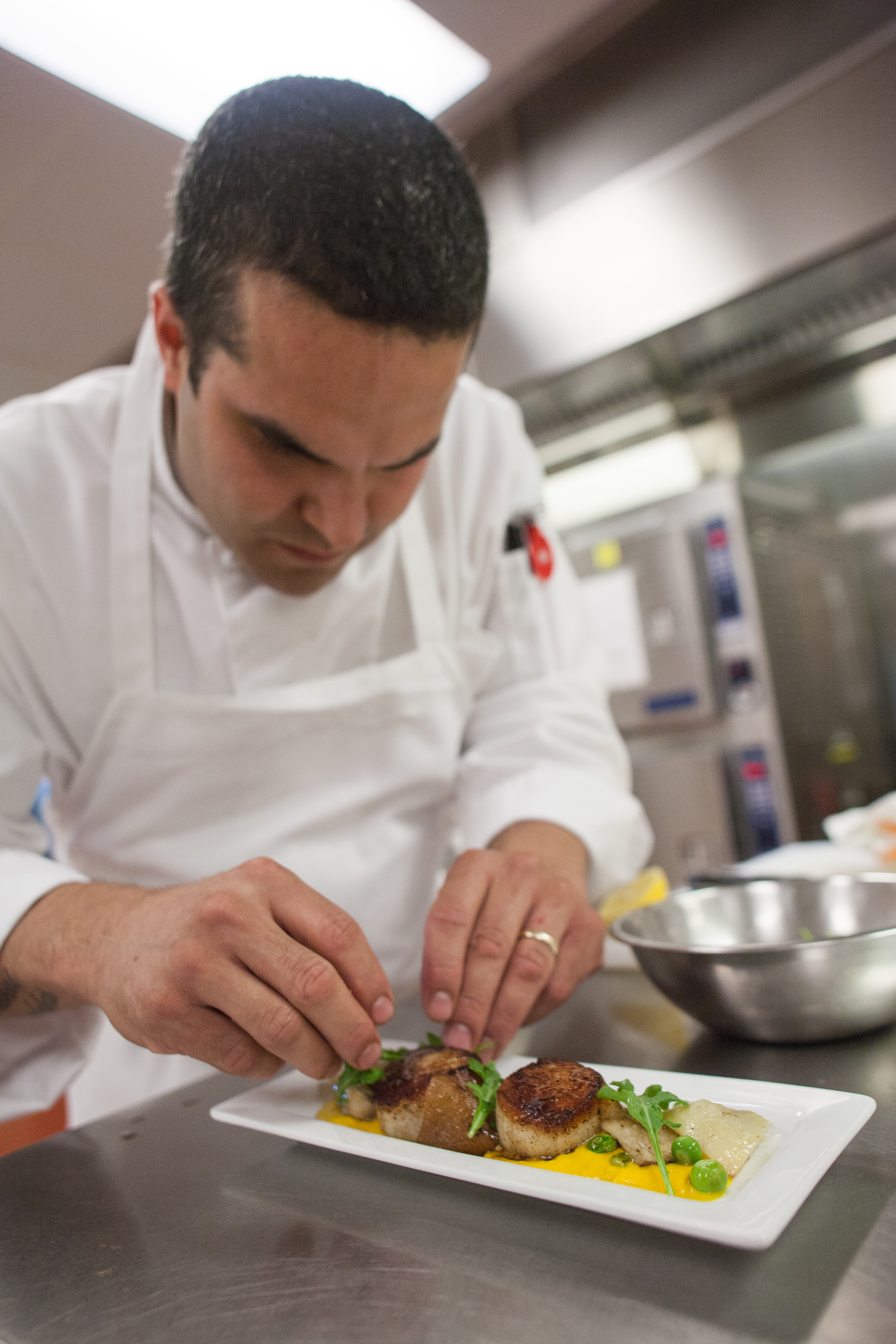 When Thompson first started work at Judson, he knew exactly the type of menu he wanted to create for Radius: contemporary American fine dining cuisine. He also knew that his goal for the restaurant was to “run a restaurant that was held to the same standards as any great restaurant—we never wanted to think of it as just a restaurant in a retirement community.”

Writing the menu is an ongoing process, says Dave Apthorpe, director of dining services. Residents aren’t shy about offering their feedback, and that’s part of the process, he says.

“We get a mix of reactions when we change a menu item, from ‘Thank God that changed,’ to ‘How dare you change my favorite thing?’ But we have the ability to bring things back, and that’s the advantage of fluidity in a menu,” Apthorpe says.

That means a menu that offers everything from meatloaf made perfectly to a modern Asian noodle dish to NY strip steak to zucchini fritters.

The community of Chagrin Falls is picture-perfect, complete with a waterfall and old-fashioned streets lined with shops and boutiques and many other great restaurants. There are many things to do at night, and people are out and about in a thriving dining scene.

“There are a lot of options for people in the community, and we want them to see us as another great option for dining out,” Apthorpe says. Special events have also been attracting attention, like an upcoming Portuguese Wine Dinner that will be held in the private dining room of Radius. Radius also has a booth at the North Union Farmer’s Market in downtown Chagrin Falls, where Thompson says he lets the community know about the great restaurant inside South Franklin Circle.

Creating a menu that would appeal to the average foodie as well as senior dining residents (many of whom are foodies too) is a work in progress. Taking a look at the menu reveals some great modern American fare, with touches from the South (a shrimp and grits starter dish and braised collard greens as a side dish).

Seasonally inspired soups are the first indicator of a changing menu, and on-trend starters include Kale Salad with pine nuts, fennel, currants and manchego cheese with a warm bacon vinaigrette; a classic Caesar salad; a garden salad; a broccoli salad with red cabbage and cherry bacon; zucchini fritters with house made boursin and oysters on the half shell with mignonette sauce.

The entrees are divided into two categories, one more adventurous, “Radius Entrées,” and one more comfort-food oriented, “Homestyle Entrees.”

“Dave and I are food guys, but even we don’t want super gourmet meals every day,” Thompson says. That doesn’t mean the Homestyle entrees are lackluster in any way, though.

“We take great pride in everything we do,” Thompson says. “You can see the artistry and craftsmanship in every item, like mac ‘n cheese with perfectly crisp breadcrumbs on top.”

Indeed, the comfort food is top-notch with just enough creativity to keep it interesting: the meatloaf is graced with a mushroom gravy; the Eggplant Parmesan features fresh pasta from Ohio City Pasta, a local company. Customers can also find a half chicken, salmon (“Salmon is very popular with our residents,” Apthorpe says.) and a NY strip steak with potatoes, cauliflower and a veal demi-glace.

The ‘Radius Entrees’ include such cutting-edge dishes as Bang Bang Noodles with hanger steak, Asian veggies and spicy peanut sauce; a Shrimp Wedge salad with grape tomatoes, red onion, bleu cheese and a roasted garlic dressing; and a complex seafood stew with a smoky pepper broth.