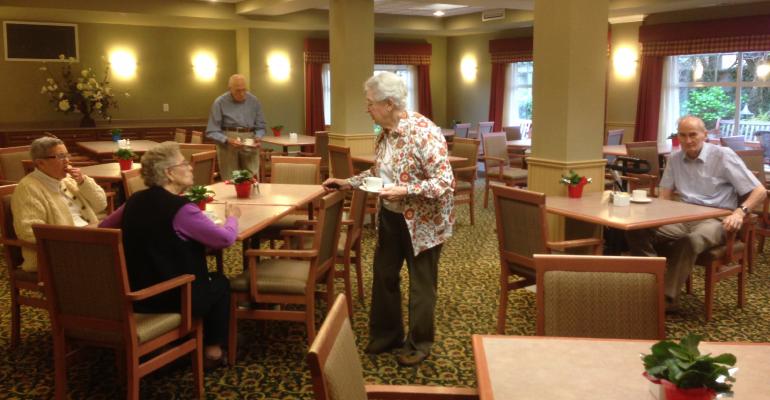 Mark A Newman / Contributor / Moment Mobile / Getty Images
Legacy Retirement Communities hopes to have two dinner seatings a night capped at 50 residents and offer independent living residents the chance to dine in-person up to three times a week to give everyone a chance.
News & Trends>Senior Dining

Legacy Retirement Communities innovates in how they serve residents under new restrictions.

Two weeks before nationwide guidance came out about social distancing precautions to prevent transmission of coronavirus, Legacy Retirement Communities proactively shut down all dining room operations and transitioned to full room service across its three campuses in Nebraska.

“Our executive team met at 10:30 a.m. one morning and by 4 p.m. we were ready to go 100% room service to all 680 of our residents,” says Robert Darrah, director of dining services. That meant acquiring enough disposable to-go containers and transitioning its evening servers to become food runners, delivering meals as well as taking orders from residents for the next day.

“We didn't want to disrupt our residents’ lives any more than they already were. They were basically confined to their apartment at that point,” says Darrah, “so we hired additional cooking staff in order to offer our exact dining room menu from A to Z.” During this first stage of shelter in place, the on-site ice cream parlor and all dining rooms were closed, and all buffets, happy hours and special events canceled.

Then in mid-July, under revised guidance from the state board of health, Legacy reopened its assisted living dining rooms by establishing two dining windows with a half hour for sanitizing in between. “The state mandate is that we can operate at 50% capacity, but we are doing more like 38% capacity, which allows us to separate those dining by about eight feet,” says Darrah. “We wanted to get them back in that dining room because a big part of a retirement community is the social aspect and being in your apartment for 180 days is not good.”

Related: Stories from the front lines: Morrison Living’s director of business development on keeping seniors cool and comforted during pandemic 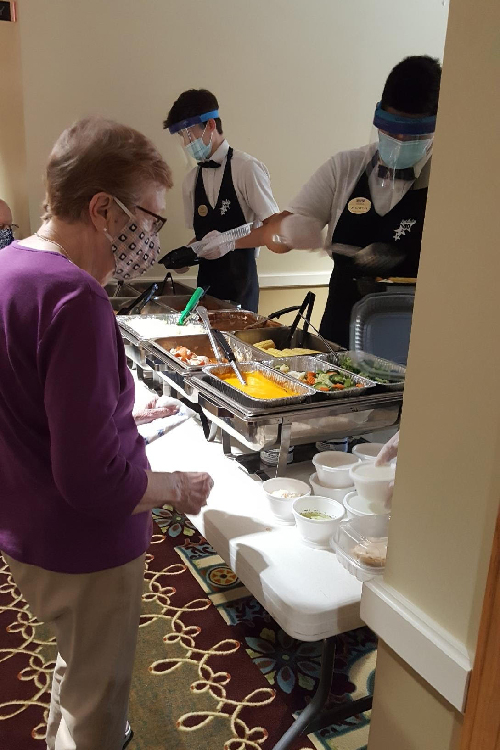 Photo: To further combat menu fatigue, Darrah’s team developed an additional menu of seven entrees that are only available via room service. “It takes a little pressure off of the food service stations in the hallways,” he says.

Meanwhile, Legacy’s independent living dining halls, which can seat upward of 220, remain closed. “We’re in a holding pattern now to make sure COVID-19 levels aren’t spiking locally,” says Darrah. Eventually they hope to have two dinner seatings a night capped at 50 residents and offer independent living residents the chance to dine in-person up to three times a week to give everyone a chance.

In the meantime, the team has transitioned from room service for these independent living residents to food stations on each floor every night. Residents can socially distance in line and be served everything from the salad, entree to dessert. “Again, we offer everything on our regular dining room menu. The food is batched cooked before food runners bring it to each floor where a chef monitors the stations,” says Darrah. “We might have beef tenderloin, seared scallops and stuffed chicken breast, for example, as well as an a la carte menu of 11 different items and classic comfort foods.”

Meals are served in to-go containers that are recyclable as well as microwave-safe so that residents can heat up leftovers. “This style of service went over like gangbusters,” says Darrah.  “The residents were thrilled by this new option.” Residents are also offered treats and beverages via morning and afternoon snack carts, staffed by employees from Legacy’s fitness department who have been unable to hold in-person classes during the pandemic.

With restrictions eased a bit, Legacy has also been able to reopen the ice cream parlor from 11 a.m. to 2 p.m. each day. Servers take residents’ ice cream and coffee orders from the doorway to avoid high-contact stations such as the cappuccino machine. “Twice a week, we also use this space to host a pop-up restaurant to give residents yet another option for their meals,” he says.

Typically, dining staff hosts a big catered event each year to attract potential residents. This year, however, they replaced that in-person event with live cooking demos on their Facebook page. “We demonstrated how to cook lobster bisque using live lobsters, for example,” says Darrah. “The first 50 people to sign up actually get lobster bisque meals delivered to them by our marketing department. We’ve had upwards of 1,000 viewers for each of these livestreams so far.”

As coronavirus concerns forced senior living dining rooms to shutter across the nation, isolation of these residents became a real concern. “When this started, I sat down with my team and said, ‘We can either crawl in a corner and just hope this goes away. Or we can move forward and keep our residents happy,’” Darrah says. “Everyone was a 110% on board and wanted to go above and beyond for these residents because they've lived a long life and they deserve to be treated and pampered.”