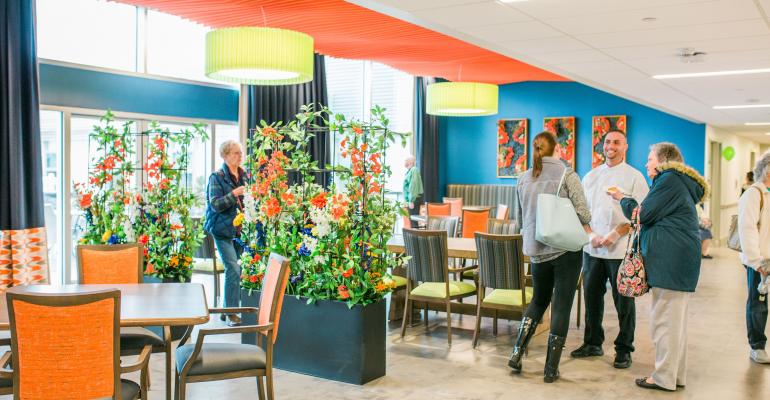 To receive a WELL Certified Gold certification, a building must meet a long list of standards to further the wellness of those living, working in and visiting.
News & Trends>Senior Dining

What does it mean for a building to be WELL certified by the Well Building Institute? It means that a building—and everything in it—is consciously created to better the wellness of those served by and working in it. Menno Haven Rehabilitation Center is the first skilled nursing project worldwide to receive this certification.

The construction of a new culinary center—essentially a central production kitchen—was a vital part of this groundbreaking certification. The focus of the culinary center is squarely around fresh, healthy, made-to-order menu items prepared by Menno Haven’s dining partner, Cura, part of Elior North America.

Jeremy Fry, executive chef at Menno Haven, says the project started about three years ago as part of a five-year, $100 million capital plan to support the growth of the community where the culinary center can serve satellite kitchens in other buildings throughout the senior living campus.

“This is the only building so far with the certification, but we’re going to use what we learned and we’ll be doing it everywhere going forward,” Fry says.

The culinary center is in the back of the rehabilitation center, with the kitchen gradually bringing on other kitchens of Menno Haven and moving staff around, something that “was a task,” according to Fry.

In order to get the certification, many items had to be checked off the list, from sugar content in beverages to sound quality…anything that relates to wellness is included, culinary or not.

“Looking at the plans, we have a bakery, and initially there was an 80-quart mixer on one side of a wall and a patient’s room on the other side of the wall,” Fry says. “That wasn’t going to work because that’s someone’s bed—they don’t want to be woken up at 5 a.m. because we have the mixer going.”

In addition, air quality is measured, water is filtered using U.V. light and everything is recorded and documented, not too much of a stretch considering that there had already been a lot of documentation in place.

Some expectations of the WELL certification simply couldn’t be met in this setting, though, Fry says. For example, plastic storage containers for transporting food from the culinary center to satellite kitchens couldn’t be replaced with glass, “since we can’t get a good seal on the food,” he says. Grass-fed beef was another goal that couldn’t be met for the scale of food being produced. But all in all, the standards were met and it hasn’t been too difficult for staff to pull it off.

“The hardest piece was making sure we had the right products from our vendors, like smaller cans of juice and soda and making sure the scooped ice cream was under 30 grams of sugar,” Fry says, adding that seniors can request more juice or more ice cream, but the point is, it’s easier to make better choices.