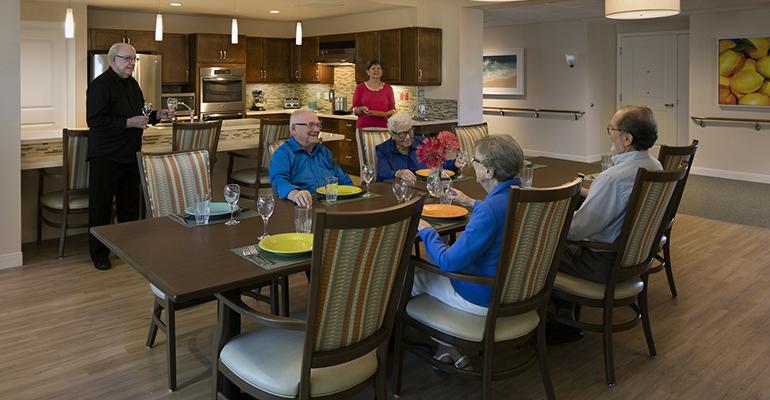 John Knox Village
The Woodlands residents live in private suites but are encouraged to take their meals communally with each other and even staff.
News & Trends>Senior Dining

Rather than the traditional institutional approach of centrally produced meal service, The Woodlands skilled nursing and rehab facility at John Knox Village of Florida has individually staffed kitchens on each floor to prepare meals for seniors.

The Woodlands skilled nursing and rehab facility at the John Knox Village senior living community in Pompano Beach, Fla., has adopted the Green House Project model of residential long-term care. The facility has two homes, each with 12 individual resident suites, on each of the six residential floors of the building for a total of 12 homes and 144 suites. Each suite is a private space with its own bathroom, while each home has its own kitchen where high-quality meals are cooked by dedicated staff and served in a family-style dining area, part of each home’s communal space that also includes a living room, sunroom, den, etc. The Woodlands serves short-term rehab and long-term care residents.

Developed by geriatrician William Thomas, the Green House Project model for residential long-term care envisions residences where seniors live fully engaged with each other and staff in homelike settings while receiving the necessary care and life assistance round the clock. 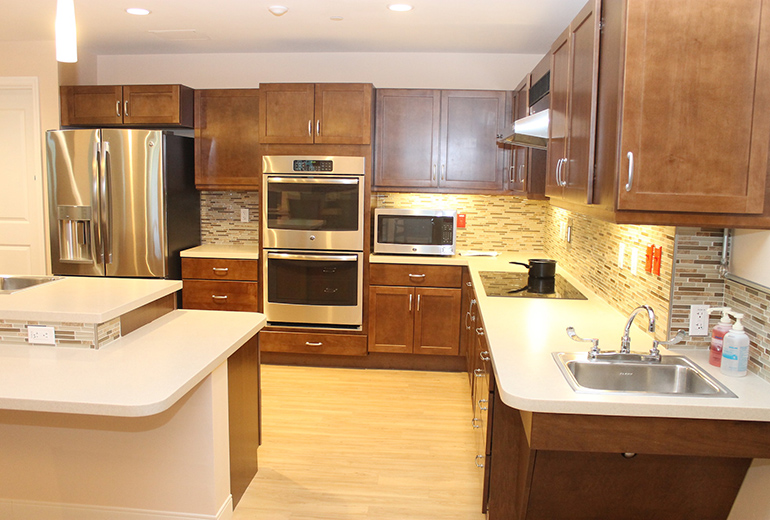 Each of the 12 homes has its own fully equipped kitchen and storage space.

A key component of Green House communities is dining. Rather than the traditional model of meals prepared centrally in volume and transported to resident rooms at regimented meal times in an institutional setting, Green House Project meals are prepared in a home-like kitchen by familiar staffers and eaten in company with other residents living in the other suites on the floor, an approach Thomas termed “convivium,” a Latin word loosely translated as “enjoying life together.”

The Woodlands, which opened in 2016, isn’t the only senior living facility that has adopted the Green House Project approach, but it is certainly one of the most successful (as well as the first in Florida).

Staffing at The Woodlands uses the “universal worker” model in which each individual (called a Shahbaz) is a licensed Certified Nursing Assistant (CNA) who has also been cross-trained to provide care for the residents and do all the cooking, laundry (each home has its own laundry room) and housekeeping.

“They pretty much maintain the entire home and do everything they would do in their own home,” explains Rachel Graham, chief clinical dietician for John Knox Village. “Most are assigned to a specific home for continuity of care reasons but there are also a few who float between homes to fill holes in schedules and things like that, but we do try to keep them in one designated home as much as possible.” 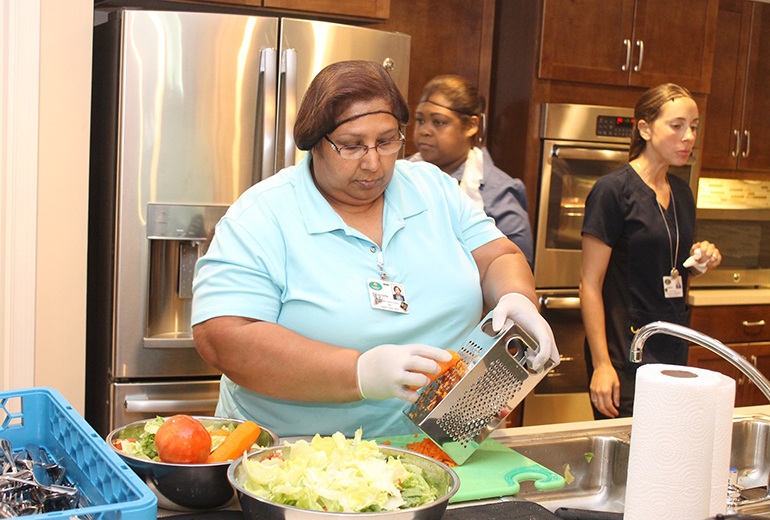 Almost everything is made from scratch using fresh ingredients in the individual home kitchens by staff assigned to that particular home.

Their culinary training is 40 hours overseen by Executive Chef Mark Gullusci, who starts with such basics as explaining state regulatory requirements, food safety procedures and FIFO stocking standards, proceeds to address basic culinary skills such as knife handling and culminates with a run-through of recipes used in the facility.

“I want them to be comfortable [with the recipes] so that when it’s time for them to take over and cook, they’ve been through it, they’ve seen it, they’ve held a knife, they’ve used the equipment,” Gullusci says.

When hiring Shahbazim, priority is put on the intangibles, not raw skills, Graham stresses. “You can teach somebody how to cook but you can’t train them to be a loving caregiver and have that passion for spending time with elders and establishing relationships with them. We hire people to embrace our philosophy and values, and then we can teach them [the necessary skills].”

And it’s not that once through the training sessions, the Shahbazim are left to sink or swim, Gullusci adds. “There’s a lot of support. I’m always available and I do a lot of [follow-up] checking, so they’re not out on their own after they’re done with the training.”

A 3-2-1 staffing model puts three Shahbazim in each home during the day, two in the late afternoon/evening and one overnight and “the kitchen never closes,” Graham stresses.

There is a four-week cycle menu because state regulations require a posted menu, “but because of the way we have the open kitchen, we have plenty of alternates that are available,” she explains. “People can have meals anytime of the day and they can pretty much have anything they want at any time they want.” 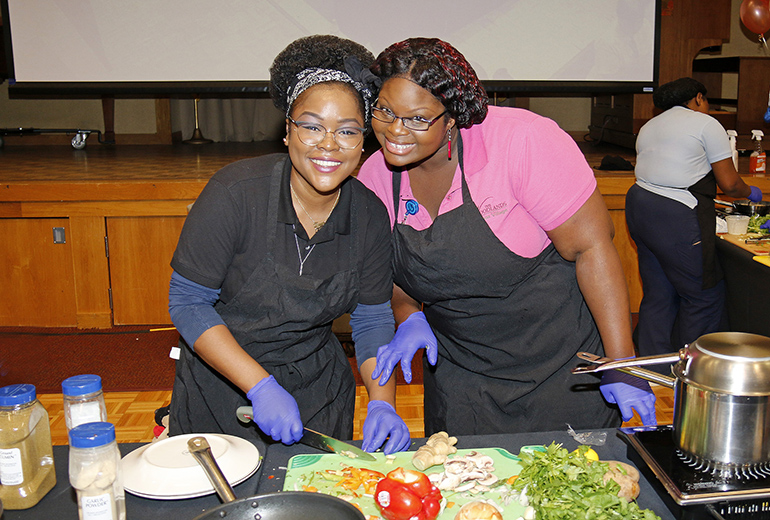 Woodlands staff, called Shahbazim, are hired more for their innate intangibles such as being able to relate to the residents, than skills, including cooking skills, which can be taught afterward.

What’s on the menu

Breakfast is mostly cooked to order from typical breakfast options, while for lunch and dinner there is usually a prepared hot entrée choice with a starch and vegetable for each meal period. For residents preferring something else, alternates that can be made quickly, such as hamburger, pizza, chicken, eggs and deli or tuna sandwiches are always available.

While the posted cycle menu is the default across the dozen homes, each is free to make a change based on the desires of its residents, so, for example, if one home prefers a chicken dish rather than the posted seafood dish on a particular day, it needs only to work with the community’s food coordinator to secure the ingredients needed to prepare an alternate.

The items on the menu cycle are created with resident preferences in mind as much as possible and then formulated by Gullusci to be easy enough for the Shahbazim to prepare as just about everything is scratch-made in the kitchens.

Each kitchen is fully outfitted with equipment such as an induction range, double ovens, a griddle, mixers, immersion blenders, toasters, coffee makers and so forth. Everything except the dish machine is residential—not commercial—equipment to promote the idea that this is not an institutional setting.

Each kitchen also has its own dry and temp-controlled storage. Deliveries are received downstairs, then brought up to the floors using back entrances to remain as unobtrusive to the residents as possible. Also, the items purchased avoid institutional size packaging such as #10 cans or 25-pound bags of rice, because each kitchen needs only residential quantities, “and we also want it to feel like a home,” Gullusci says. Special ingredients required by a single kitchen for a particular recipe might prompt a run to the local supermarket.

“Most of our elders are on regular diets, so we’re just following the philosophy of what would they eat if they were in their own home.” That said, all Shahbazim are trained on specialized diet protocols and the choices are available in each home for these diets, but ultimately, “we’re giving them the autonomy and choice that this is their life and if they choose not to follow a prescribed diet, then that’s their right,” Graham says.

While breakfast tends to be more informal as residents wake up at various times, they are encouraged to take lunch and dinner more communally at the large dining room table in each home that seats 18. In fact, staff is encouraged to eat with them to promote the sense of convivium.

“It is their right to eat [alone] in their rooms if they choose, but we try to encourage [dining communally],” Graham offers. Generally, though, most of the residents prefer the social dining, she adds, so this isn’t a major issue. 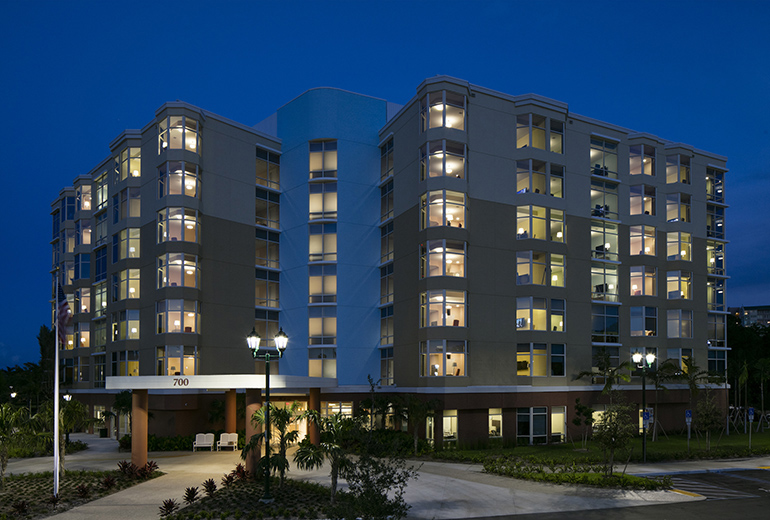 The Woodlands has six residential floors, each divided into two “homes” which each contain 12 individual resident suites.

Going outside the home

In addition to the kitchens in each home, the Woodlands also has a dining outlet called the Palm Bistro on its first floor, which operates from 8 a.m. to 8 p.m. during the week and 11 a.m. to 6 p.m. on weekends.

“It originally opened as a kind of quick-service casual restaurant with a Panera Bread-style menu for staff, residents and visitors,” explains Joe Mallen, director of dining services for John Knox Village, “but because dinner sales tended to drop off, a couple years ago we introduced a gourmet dinner offering with things like filet mignon, New York Strip steaks, lobster tail plus meatloaf and some vegetarian options, and it has been very well received by our residents.”

As a result of the change, Palm Bistro is now a casual counter service restaurant during the day offering soups, salads, sandwiches, pizza, hamburgers, hot dogs and tacos, and a more formal sit-down restaurant in the evening.

The only other onsite dining venue at John Knox of Florida is the Patio Dining Room, designed mostly for the independent living residents, which serves breakfast, lunch and dinner six days a week and a Sunday buffet.