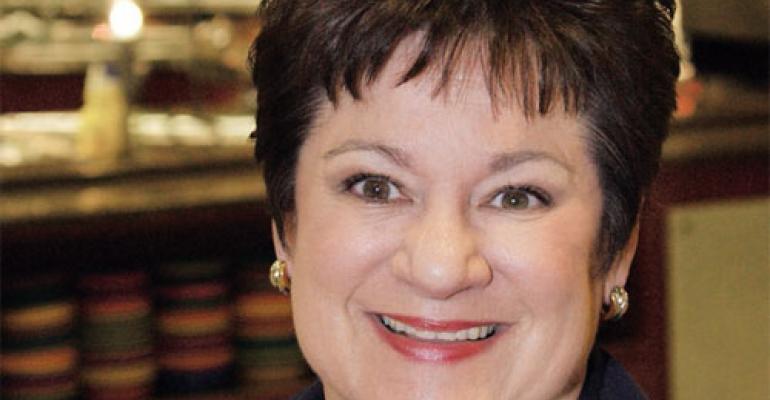 After three decades managing campus dining at University of Richmond, Dee Hardy has quite the track record to stand upon.

The successful management of a college dining operation generally requires a certain level of commitment, enthusiasm and just plain love for the campus environment — in addition to creativity, competence and adaptability. Diane (Dee) Hardy has all of this in abundance.

As associate vice president of campus services at the University of Richmond, she is responsible for all campus dining and related auxiliary services, including nutrition information, ID cards, vending, systems management, maintenance, equipment and everything related to foodservice.

But more pertinent to Hardy's winning the 2011 Silver Plate award in the College/University category is her tenure as head of dining services exclusively, part of her more than three decades serving the school.

During that time, she has overseen the complete re-invention of Richmond Dining, including the development and implementation of a wide range of retail concepts designed to fit different campus needs, and the total renovation of the university's lone residential dining hall — as it continued operating! (for the full story, see the March 2007 FM).

The numbers tell the story. Over her tenure heading dining services at Richmond, revenues have jumped from $6.5 million to $16 million, with board, cash and catering all doubling or tripling their sales.

The native Midwesterner was one of the original group of young foodservice managers to join then-FSD Ron Inlow in the late 1970s to build a sustainable self-operated campus dining service at Richmond after years of contract operation.

It was a huge challenge given the aging facilities that had already confounded the professional managers of the contractors that had them. But turn it around they did, sparked by the opening of a brand new campus dining center, Heilman, in 1984.

By the time Hardy took over as director in 1997, however, Heilman's original innovative scatter design was falling seriously behind the times — regarded by students more as “a high school cafeteria” than a modern college dining center.

It was Hardy who led the effort to convince university administrators to fund a complete makeover of Heilman.

She succeeded, but the project was unexpectedly fast-tracked, necessitating that construction take place in part during the spring of 2006 — while classes were in session and Heilman needed to continue operating — and later during that summer, when Heilman's production capacity was crucial for keeping up with the foodservice needs of thousands of conference, sports camp and academic session attendees.

Today, Heilman's appeal is a significant reason why meal plans are so popular with apartment and off-campus dwelling students at Richmond.

The experience illustrated the full range of Hardy's skills: in organization, people management, innovation and interpersonal communications, particularly with students, whose acquiescence to the disruption was critical.

It was undoubtedly Hardy's finest hour, but hardly an anomaly. Before and since the Heilman project, she has worked to keep retail operations at Richmond in pace with student lifestyles and expectations.

This has led to the development of a range of campus retail outlets. The mix includes an extended hour c-store (ETC — Every Thing Convenient), a late-night snack shop (Dean's Den), a campus pub (The Cellar), a library café (8:15 at Boatwright) and, most recently, a fast-casual dining outlet with an international cuisine theme called Passport Café.

She also has taken on concessions at Richmond's new campus football stadium (she already operates them at the basketball, soccer and baseball facilities) and is on track to open Lou's Café to serve students and staff in the business school.

Another impressive part of Hardy's dining operation is the campus catering, which serves in excess of 70,000 guests a year, including prominent political and cultural figures like Mikhail Gorbachov, Margaret Thatcher, Yo Yo Ma and Gen. Norman Schwartzkopf who come to the campus from nearby Washington, DC.

But Hardy's efforts don't stop with the serving of customers. She is also a director deeply committed to her staff. She encourages promotion from within — three directors and 11 managers have come up through the ranks and the executive chef started as a line cook in the department. With Hardy's encouragement, he pursued his culinary education and today is an ACF certified executive chef instyrumental in designing the culinary arts curriculum at the university.

I was originally a drama and speech major at Valparaiso, then transferred to Purdue as a housing equipment and environmental design major. I realized rather quickly that I would probably spend most of my time at a drawing board, and I’m a people person. So I was checking out other majors when I happened to wander down the hall into the restaurant and hotel department and the next thing I knew, I was in the restaurant and hotel program.

I worked in ARA’s B&I division in Minneapolis for a little over a year after graduating, then went back to Purdue to work on my Masters and be a teaching assistant at the restaurant-hotel school. I was a TA for all of a month and a half when the next thing I knew I was running their training facility full-time as well as teaching.

About a year after I left Purdue, Ron Inlow came around interviewing people for the team he was putting together to start a foodservice program at the University of Richmond. I was just young enough that the idea of being able to go somewhere and build a foodservice from the ground fl oor sounded like a once-in-alifetime opportunity.

I started as a unit manager, in charge of a unit that fed 750 people. I was 25. In fact, looking back, I’d say that the median age of our whole management team was under 30. Even Ron was only around 35. Probably, anybody older knew better and wouldn’t have taken the job. The place had run through about six contractors in the previous 10 years. The facilities were ancient, but Ron had a great eye for talent, and we built a viable program.

Hosting the 1996 presidential debate at Richmond was fun because not only were we catering, but we had to wear other hats as well because of the small size of our staff. For example, I partnered with another individual to run the press credentialing center in addition to all the food. That was fun, a once in a lifetime opportunity.

Sometimes, people look at sustainability and they feel overwhelmed, don’t know where to start. Well, start one step at a time. It’s not about perfection initially as long as you build your program as you go along. Every year we have goals we look at that are sustainability oriented that try to add to what we’re doing or improve what we’re doing.

I’ve always felt very strongly about giving back to the industry. This is a great field. You work hard, but you can also have a life.

There’s no question that this is a generation that communicates through technology, and you have to be savvy enough to go there with them.

I’m not a micromanager. When people think you believe in them and you’re not breathing down their necks on every detail, I think they grow, they reach and they stretch.

I actually had one of the fi rst web pages on campus. We had a fl oater who worked for us and had a background in web page design, so we had him design a foodservice web page. This was maybe fi ve years after we opened Heilman, so probably the late 80s, early 90s. The university didn’t even have a webmaster yet. By the time they did, we already had one of the hippest web pages around. We had information up on the web way before a lot of folks.

Students are very savvy consumers. Money’s going to continue to be tight and I think this is a generation that has learned the value of a dollar and how to build buying power.