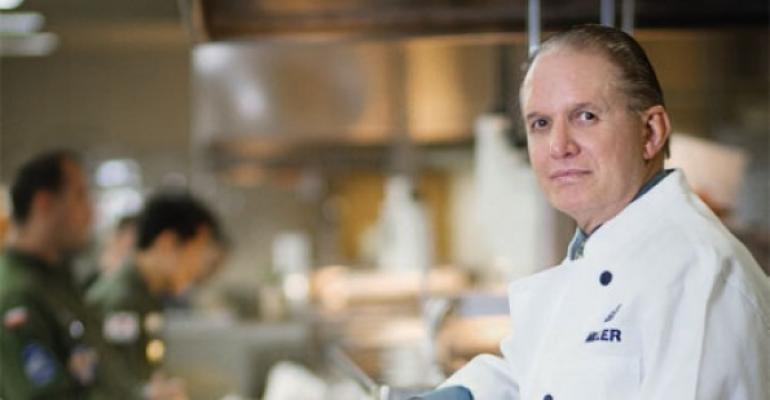 Who says life has no second acts?

Who says life has no second acts? George Miller's winning of the the 2011 Silver Plate Award in the Specialty Foodservices category is an equally distinguished second act to a first act that included 30 years of active duty service in the United States Air Force (USAF), including the Vietnam War, Grenada, Desert Storm 1 and Panama.

As the head of worldwide food and beverage operations for the USAF — part of that also during wartime — Miller has notched a series of noteworthy achievements. These include

A basic enlistee, Miller began at the bottom of the military foodservice rung as a basic cook, but he worked his way up the ladder, eventually managing foodservices for whole installations and then for “commands,” which are whole regions encompassing numerous installations. He has served both here in the U.S. and in exotic locales like the Philippines and Turkey.

When Miller first took over his current responsibilities in 1996, Air Force foodservice was still entrenched in its traditional operational mode of disconnected and individualized unit operations. He helped implement a new standard foodservice management system modeled on those used by commercial restaurant chains to achieve efficiencies of scale.

It eventually became the model for the Common Food Management System, now used by the Defense Department across all its service branches to quickly gauge foodservice capabilities in any particular location.

Miller's standardization initiative also enables consistent menus, training programs, equipment and prime vendors, and it gives personnel consistent foodservice expectations across the service and eliminates the need to retrain foodservice staff if they move from one operation to another.

Miller's most recent major program is the FTI, which is designed to modernize on-base dining — including dining venues, clubs and snack bars — by giving them more of a college campus commons feel better attuned to the expectations of today's recruits. It incorporates enhanced food quality, variety and availability, including more healthy choices, as well as more convenient locations and hours of operation.

The FTI is currently in its pilot phase, having been implemented at six bases in 2010.

This is an important component of the modern military's emphasis on fitness and wellness for all personnel and far removed from the movie stereotype of chow lines dishing out nondescript grub.

Just as important has been Miller's significant role in facilitating the USAF's ability to establish hot foodservice in combat theaters in record time. In Iraq, for example, airmen were getting hot meals within 72 hours of establishing a base, something that is a tremendous morale booster.

Miller may have made his most noteworthy contributions in the military foodservice realm, but he is also a longtime active participant in the broader foodservice industry.

He has been affiliated with the National Restaurant Association for 35 years now, serving as the advisor for military foodservice programs to the NRA board.

He has also been a Hennessy Travelers Association (HTA) traveler seven times, visiting Air Force bases around the world as a judge in HTA's awards program.

HTA's mission accords with Miller's keen interest in encouraging culinary excellence in military foodservice, supporting educational opportunities for members of the armed services serving in hospitality assignments and supporting those who wish to pursue careers in the hospitality industry after leaving the military.

I spent a couple months in college, but back then the draft was hot and heavy, so I decided to take the option of going to the Air Force. I had been working as a meat cutter parttime while in college, so when I entered the service, they used that to put me in the foodservice career field. I thought they wanted me to be a meat cutter, but I ended up being a cook, which I kind of enjoyed once I got into it.

I spent 30 years on active duty in the USAF, including during the Vietnam War, Grenada and Desert Storm One as well as a couple of other little things, like Panama. As a civilian, I’ve been involved with the wars we currently have and the ones prior.

When I got out of the Air Force, I went to work for Old Country Buffet as one of their store managers in San Antonio. I spent a good six months with them before the Air Force came calling. The individual who held the position I now have had retired and they asked me if I would consider coming back to replace him.

I said “yes” because I had always enjoyed the work. My last job before leaving had been at Air Force headquarters, where I was in charge of the food management assistance teams. I used to go to all the bases to do evaluations and provide guidance on doing things the right way. I liked it, and one of the reasons I came back was to continue doing that kind of thing.

When I came back I used some of the experience I had gained on the outside with Old Country Buffet to implement a more centralized management approach as opposed to the system they had, where everyone kind of did their own thing.

One advantage of centralizing is that now, when an individual graduates from one of our cook schools and goes into one of our dining facilities, he sees the same things that he trained on. It’s just like in the corporate world, where if you see one McDonald’s you’ve seen them all, and that was kind of the approach we took. I picked that up from Old Country Buffet because it seemed like a smart way of doing business.

A lot of what we use is convenience products but we still do some scratch cooking out in the field. In fact, we are the only service— though the rest may deny that—that has the capability to put meals on the ground in 24 to 48 hours. At first it may only be what we call unitized group rations—convenience products like canned meats that can be thermalized in a number of ways and can feed 25 to 50. Later, we can progress to doing homestyle and scratch cooking out there.

Distribution can get complex. For example, we have a transit center in Manas, Kurdistan, and 99% of the product going there comes from the U.S. Literally to get food product in there, when we first started out, it had to be shipped to Europe, then transported by rail through Russia and a number of other countries from the old Soviet Union, then put on a boat because you have to cross a couple large seas, and finally put back on a truck at the tail of the logistics trail.

I was a dining facility manager at Wright- Patterson AFB in Ohio when we competed for the Hennessey Award and won it in 1973. I became involved at that point, and from then on, wherever I went, we tried to compete and win. When I moved into a higher level of management, I became a Hennessey traveler who evaluated the operations. I’m now a seventime traveler.

The Air Force foodservice program is the best in the Dept. of Defense and I’ll put that up against anybody. Because of the Hennessey program and the folks allowed to travel with us from the restaurant industry, we get ideas and suggestions that help us get better. It also boosts the morale of our folks who work in foodservice.