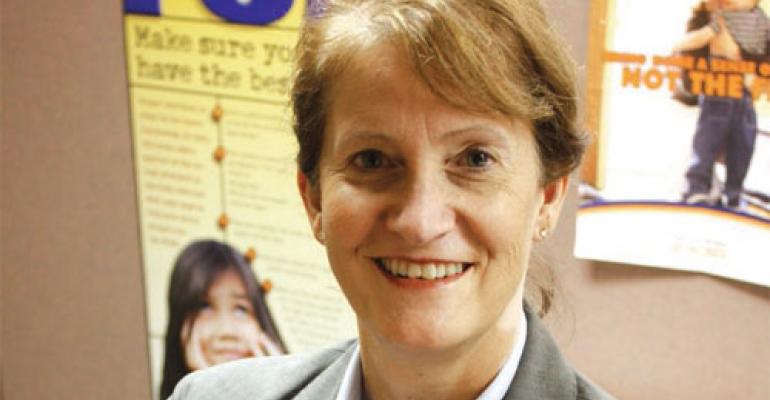 Strong management skills and a clear-eyed vision of what needs to be done can go a long way to turning around even the most troubled of school nutrition programs. That has been amply demonstrated by the achievements of Lora Gilbert, senior director of food & nutrition services for the Orange County (FL) Public Schools for the past seven-plus years.

Gilbert's work in leading a remarkable turnaround of Orange County's child nutrition program has earned her the 2011 Silver Plate Award in School Foodservice.

When she first came aboard, the nutrition department was $7 million in the red; it now has $11 million in its fund balance thanks in part to a 51% increase in reimbursable meals — an increase of 11.9 million meals overall — on her watch, as well as a 78% increase in breakfasts served.

Orange County also posted a 42% increase in the number of secondary school meals served in the past four years, and Gilbert also led an overhaul of operations that has allowed the nutrition department to meet its goal of 40% food and labor costs.

Gilbert says the secret to her success is “putting a great team in place” from a variety of backgrounds outside school foodservice, such as healthcare and even Universal Studios and Disney, and setting specific goals for them.

She is a big believer in “dynamic tension” to encourage innovation. For example, she insists that procurement specialists and menu writers work together and find common ground when developing menus. She also requires all her managers to have direct field responsibility over school sites so that they keep in touch with how top-down decisions affect operations at ground level.

Orange County had hired inTEAM in 2002 to help turn around its troubled foodservice program, and the firm in turn hired Gilbert to head the department. It was a bold and out-of-the-box move in that Gilbert had no operational school foodservice experience at the time.

She did become involved in school foodservice while earning her Master's degree at Kansas State University, publishing a pair of articles based on USDA studies of the nutrient content of school meals. But she then embarked on her professional career by serving as foodservice director for a senior center, and later as staff dietitian for a family physicians group.

Gilbert left Schwan's in 2002 and moved to Orlando. A year later, the school system and inTEAM came calling, intrigued by her national experience dealing with school nutrition issues while with Schwan's.

Key to getting a handle on Orange County's nutrition program finances was changing its traditional approach of site-level management of the dining operations where each school literally had full control of its own staff, menu and procurement. Not only was it grossly inefficient and costly, but the varying levels of menu planning expertise often left individual sites unable to meet federal guidelines for meal reimbursement.

Gilbert worked hard to centralize procurement and menu planning to bring efficiencies of scale to the enterprise. One result was a centralized production system based on six central kitchens that can deliver freshly prepared food to 47 satellite sites that are too small to do their own production efficiently.

Menus are developed with student input through taste testings to ensure customer “buy-in” (one reason for the growing participation rates), and Orange County has been at the forefront of the move to incorporate more healthy ingredients like fresh produce and whole grains into its meals.

That goal has been facilitated by Gilbert's involvement with the School Nutrition Association's Chef's Table initiative and the Chefs Move to Schools, for which Gilbert committed her district to be a pilot site. The initiatives seek to bring culinary expertise from other segments to school menu development programs.

I think my interest in diet and nutrition started in 4H. When I was growing up, the Methodist church had a booth at the county fair and we always did the cooking. Also, in 4H you have to give project talks and one we developed on nutrition and food kind of became our standard demonstration each year.

In college, I really enjoyed classes in nutrition and food management. I was the only one who would volunteer for the four o’ clock morning shift at the Union, and that’s how I got part of my work experience—doing the salads at the Union starting at four in the morning. I’ve always wanted to work around food.

My first job out of college was as foodservice director for senior centers in a small Kansas town. I learned a lot about food choices and how near and dear they are to the hearts of people. I really had an early introduction to customer service.

I later worked as a dietitian for a family physicians group for five years. I was not only a case manager telling people what time to come in and whether they needed a blood test, but I also had a full program going. I did cooking classes, grocery shopping tours, lectures and even a newspaper for all my patients. Back in those days that was pretty advanced.

I’ve loved every job I’ve ever had. I’ve had great supervisors. Some people say I’ve been very lucky, but I say I just chose very carefully.

In the Chef’s Table program, I insisted that each chef team with a foodservice manager, and I think the chefs had as much impact on the managers as they did on the items that they came up with. It was also great to see that aura of professionalism spread to our managers from the chefs. For example, when a chef walks in wearing that chef’s jacket, the kids are really impressed. And, because the manager wears the same kind of jacket and looks like the chef in these presentations, the impression rubs off.

When we made our initial introduction to school foodservice to the outside chefs interested in the Chef’s Table program, we went over things like what makes a meal component, what makes a pasta salad a reimbursable meal, what our food cost needs to be, and things like that. Well, we didn’t get all of them back for the second round. We lost some.

We also required the chefs to make two visits to the schools, where I encouraged them to eat lunch with the kids and talk to them as long as they didn’t make any promises. Then we just let them go on developing recipes, and one result was all these dark leafy greens and orange vegetables in our dishes.

One of the biggest surprises to me from the chef-developed recipes was how often cole slaw came up. But now that I look around, I see it’s everywhere.The kids like it, not so much as a side dish but incorporated into the entrée—in the fish tacos and on top of the pulled pork. And it took the chefs to point that out to us!

Adults think they know what’s best for kids, but there’s a very fine line you walk to decide what goes on a school menu. After all, nobody is standing over the kids, making them take something. It’s a very fine line we walk to make things nutritious and yet not feed the trash cans. And unless the mom is standing right there to enforce it, I’m not going to make sweeping changes that kids don’t like. I’m going to listen closer to my customers and see what they ARE willing to accept.