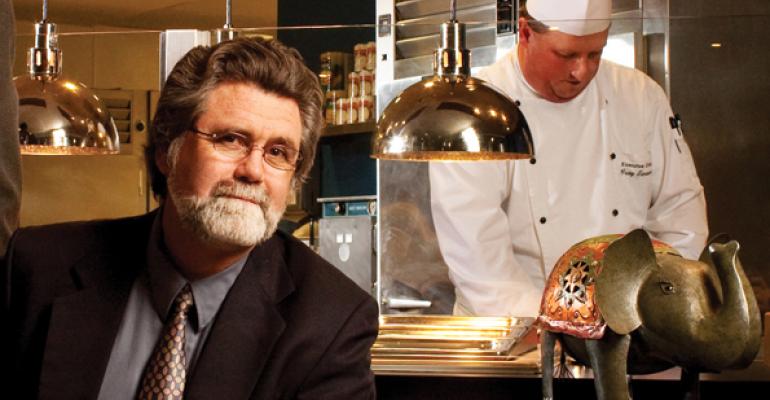 It's hard to appreciate just what an impact Mark Freeman has had on employee dining services at software giant Microsoft Corp. Today, one hears about the dozens of sophisticated cafes on the main campus in Redmond, WA; about the local restaurant brand program; about the retailapalooza of the company's West Campus Commons; and about high-tech employee amenities and commitment to sustainability and one thinks, “Well, what do you expect? It's always been that way for a company like Micosoft.”

It's hard to believe, but before Freeman assumed direction of dining and other employee services at the company in 2005, its in-house foodservice was a source of widespread disenchantment, at least as measured by comment board chatter and anecdotal evidence.

Today, Microsoft Dining is one of the most respected, analyzed and lauded corporate foodservice programs in the country (the plaudits include an FM Best Concepts Best of Show Award in 2010). While many have certainly had a hand in that success, it is Freeman who led the way, and is why he has been honored with IFMA's 2012 Silver Plate in the Business & Industry/Foodservice Management category.

As senior manager of global employee services, Freeman oversees a worldwide operation, with sites in 24 countries from China and Europe to North and South America, and deals with multiple contract foodservice providers.

At Microsoft, Freeman essentially reinvented the whole program by putting an emphasis on quality and customer choice. The company's largest operation, the headquarters in Redmond and its contiguous West Campus, illustrates the success of these efforts.

The main campus boasts a network of more than 35 cafes that each provide a distinct mix of station concepts, some from contract services provider Eurest Dining Services and others as part of Freeman's local brands initiative. The latter is one of his most notable successes, a program that brings noted local restaurant brands to the Microsoft campus to offer their distinct menus as part of the concept mix (for more, go to http://tinyurl.com/bqz2mo3).

How does one get to be the head of all dining at a giant international company like Microsoft? For Freeman, the road began in a restaurant dishroom in Olympia, WA, where he worked as a teenager. “I really enjoyed it,” he recalls. “I was earning money and met some really interesting characters.”

He continued to work in restaurants while earning his Bachelor's in business at The Evergreen State College. Upon graduation, he applied for a job with the dining team at Evergreen, which was managed by Saga Corp. Freeman worked for Saga for 25 years, mostly in colleges, building up a vast store of operational experience managing accounts all over the Northwest, from Seattle and Bellingham, WA, to Billings, MT.

“In the middle of all this you start having a family and begin looking at the hours you put in,” he says. “Eventually I realized there was this whole other world called B&I where you only feed two meals a day, have weekends off and are home for Thanksgiving and other holidays.”

He transferred to Saga's corporate dining unit but soon left to take a position on the client side with high tech giant Hewlett-Packard. He served as client liaison until H-P shifted into a downsizing mode following its 2002 merger with Compaq.

At that point, Freeman went to work with the H. Porter Consulting Services organization while continuing to look for another opportunity to head his own program. “That's when the job at Microsoft came up,” he says. “I took it and the rest, as they say, is history.”

It is a history with an arc that traces an ascending path when it comes to satisfaction with onsite dining at Microsoft. When Freeman first got there, dissatisfaction was rife. “I came in thinking this was a premier job in the industry, so I figured I'd just hold back and take a look at things,” Freeman says. “But I soon realized that I'd need to start stirring things up.”

The first thing stirred was the coffee. Freeman replaced the traditional communal coffee pot system — a source of endless frustration and mockery on the company employee comment boards — with iCup units from Starbucks, which brew individual cups of gourmet quality product.

“The employees went wild,” he says. “I remember our vice president of human resources getting on stage at one gathering and applauding the coffee. She said that it made one of the biggest impacts on employee morale she'd seen in her career. That reaction drove the idea for me that we should definitely focus on the customers and what they want.”

Freeman's early years with Microsoft coincided with a period of rapid growth as well as an employee satisfaction initiative called My Microsoft (led by that same VP of HR, Lisa Brummel). These enabled Freeman to expand and upgrade the dining program, adding cafés to the headquarters complex and launching the local brands initiative.

He has also extended café operating hours, added a series of mini c-stores and kiosks that offer convenient high-quality grab-and-go meal options in addition to gourmet hot and cold beverages and complemented the iCup initiative with a free beverage program in the break stations featuring branded bottled/canned drinks.

In April 2009, Microsoft opened its West Campus Commons, a major addition to the company's commitment to employee satisfaction. The complex houses the gaming and mobile phone divisions but also incorporates a “commons” that houses a series of services and amenities for the use of employees.

These include dining outlets that are all part of the local brands initiative pioneered by Freeman three years earlier, a high-profile reminder of the many innovative changes he brought to the company over such a relatively brief time.

(For more on Microsoft Dining, go to http://tinyurl.com/cknwl3r.)

For a slideshow of the West Campus Commons, go to http://tinyurl.com/77fsbcq