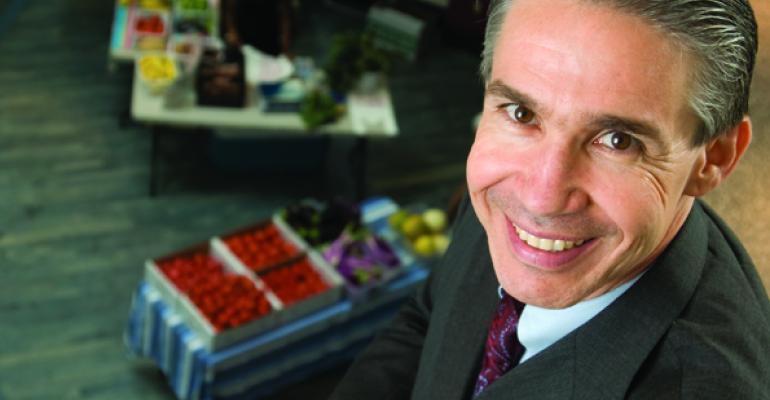 Since he took over direction of the Food and Nutrition services at UNC (University of North Carolina) Health Care in February 2005, Angelo Mojica has transformed the institution’s dining operation into one of the more inventive and influential ones in the country. That record earned him the 2013 Silver Plate Award in the Healthcare category.

After finishing his Masters in Public Health from UNC, Mojica began his career as an RD in a psychiatric hospital where he was soon put in charge of production and service for 750 patients. He soon grew frustrated with his lack of knowledge about the culinary activities he was supposed to oversee, so he decided to pursue a culinary degree.

That led him to join management company Morrison Management Services because it enabled him to work in an account near the culinary school at Johnson & Wales in Providence, RI.
Mojica stayed with Morrison for 12 years earning a CEC from J&W and working primarily in hospitals throughout the Mid-Atlantic region.

The only job Mojica says he would have left Morrison for was his “dream job,” heading dining services at UNCHC, where he had applied earlier in his career. In 2005, he heard that the position was open again. At first he was told that the position had been filled, but persistence led to an impromptu interview with the vice president in charge of the search. He got the job.

When Mojica took over UNCHC’s dining, the retail component was doing about $4.2 million a year. It now does about $10 million utilizing basically the same footprint and in-house population.

The difference is the array of some 20 branded concepts covering everything from smoothies to sushi that Mojica and his in-house team developed from scratch. Those branded outlets dot the medical center campus in a series of food court and standalone locations and are augmented by an 8,000-sq.ft. Starbucks outlet, the largest in any U.S. healthcare facility.

The in-house brands have subsequently been cleverly leveraged to do double duty as the base for a new patient dining program called Restaurant Delivery launched last year.

Unable to make a traditional room service program work within the institution’s financial parameters, Mojica led his team in developing a hybrid model that offers patients meal choices from a cornucopia of branded “restaurants” as if they were ordering takeout from a supersized food court.

Mojica is also very active in the Association of Healthcare Foodservices, being recently elected to its board of directors. He has also played an active role in the organization’s annual culinary competition where he and his executive chef brought home medals in three of the last four years.

“I cooked with mom all the time growing up. One year, I asked her for a pot set  and my brothers beat me up for that.”

“I worked as a dietitian in a psych hospital in North Carolina, and was put in charge of food and serice. I was 27 and had 110 people reporting to me.”

“I didn’t think I knew enough about food science, so I decided to get a culinary degree. I wanted to go to Johnson & Wales because of their weekend program, so I applied to all the different management companies to see which one could get me closest to Rhode Island. Morrison called first so I went with them.”

“I found out about the UNC job by luck. I was working in a 900-bed hospital in DC and my name and phone was on patient brochure. An old boss of mine happened to have a son in the hospital, saw the number and called to tell me.

“I told the VP who was interviewing me that I’m going to keep applying so he might as well hire me now.”