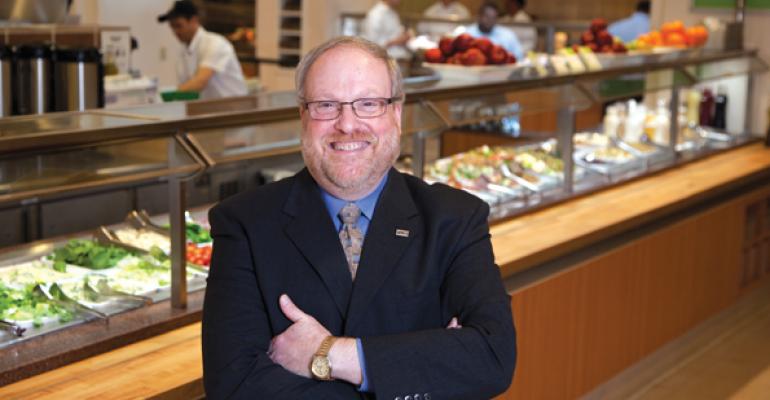 Jay Silverstein is a dining services lifer. He has spent almost 35 years in the profession, including three years as a college intern with a foodservice management firm.

For the past 15 years, he has served as vice president of conference and dining services for the prestigious financial firm Credit Suisse, overseeing dining and conference service operations in the Americas. That’s a clientele encompassing some 12,000 people all told.

And for those customers and their guests, Silverstein has developed a dining program that emphasizes food quality, face-to-face service, innovative menu concepts and preparation/presentation, nutritional integrity in a cost-sensitive environment. It is for this, as well as for his extensive service to the corporate dining community as a whole that he was chosen to receive the 2013 Silver Plate Award in the B&I/Foodservice Management category.

Silverstein comes from a hospitality background. His grandparents operated restaurants and F&B in hotels, and from an early age he says he learned to appreciate the centrality of food in social relations.

He worked in campus dining while attending Farleigh Dickenson University, then enrolled in an internship program, where he secured a place with management firm Interstate United Corp. at Phillip Morris Corp. and Blue Cross Blue Shield of New York. After graduating, he secured full-time employment with Interstate United, working first at BCBS-New York as an assistant foodservice manager and then as foodservice director with the company’s operation at The Bankers Trust Co.

In 1985, Silverstein left to join what was then The First Boston Corp. (now Credit Suisse). He was named to his current position in 1997.

At Credit Suisse, Silverstein oversees dining and conference services for the company’s New York campus, which has an onsite population of around 10,000. He also oversees the café, vending and office coffee services for Credit Suisse offices in Princeton, NJ, Chicago and Raleigh, NC, as well as vending, catering and office coffee for eight branch offices across the Americas.

Under his leadership, Credit Suisse has emphasized scratch-cooked food that highlights ingredient quality and freshness. The sophisticated customer base at Credit Suisse—used to paying for quality in the heart of Manhattan—is very demanding and Silverstein has demonstrated a continuing knack at exceeding their expectations cost-effectively.

He puts a particular emphasis on the interaction between the guest and dining staffers. Silverstein is a great believer in a culture of hospitality in its traditional sense and insists that the management companies he partners with to provide foodservice to Credit Suisse operations embrace this.

He himself can often be seen in the back of the house of the main Credit Suisse office in New York from early morning to well into the evening if there are catered events taking place, ensuring that everything goes right. At the same time he solicits customer feedback, good and bad.

Beyond his role at Credit Suisse, Silverstein has been an active supporter of the onsite dining community, especially through his active involvement with the Society for Foodservice Management (SFM). He has been an SFM member since 1982.

He notes proudly that he was a waiter at the first-ever SFM function held in New York while he was still a college student. The experience, he says, left him with a lasting appreciation of the value of an association to give members collaborative opportunities.

Silverstein has served the association in various capacities, including a five-year term on the board of directors and serving as president for the 2003-04 term.

“I always believed that to be really good at something you have to start at the bottom and learn everything from the bottom up. Because I can basically do and have done any job in an onsite foodservice facility, I think that helps me earn people’s respect. Want me to show you how to unload a dishwasher or work a grill? I can do it and show you how to do it right.”

“The son of Vincent Angelo, general manager for Interstate United at McGraw-Hill, was my roommate in college. For my senior year project, I had to do a dinner for 500 people. Mr. Angelo brought along as a guest to the dinner his client at that time who was Joe DeScenza  who said to me, ‘When you’re ready to graduate, I want you to come work for me.’ That’s how I got my first job at Interstate United.”

“I left Interstate United shortly before the merger [with Canteen]. I knew I had to move my career along and saw an opportunity to do purchasing for food services for what was The First Boston Corp. at the time. I fell in love with the big corporate atmosphere. It was totally different from working for a foodservice company. I was mentored by Joe Desenza, who had a  lot of responsibilities and I thought, that’s the kind of role I want to follow."