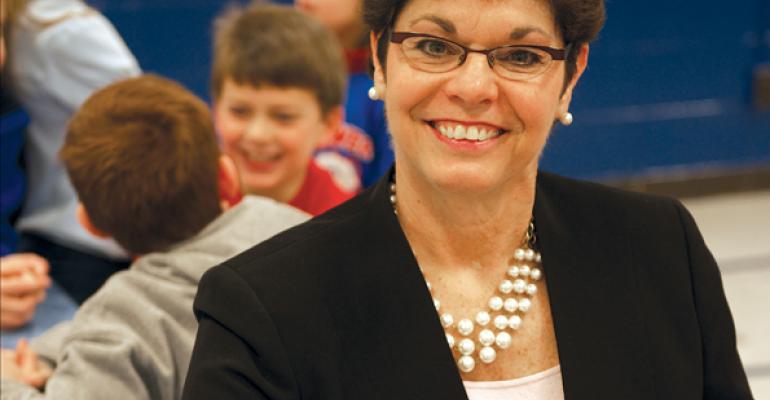 Julia Bauscher has had an immense impact on the ability of the Jefferson County Public Schools nutrition program to deliver quality, fresh, healthful meals to the district’s 100,000 students, and not just from her current role as director. In fact, Bauscher has spent the past 20 years serving the students and parents of Jefferson County Schools, but only the last four as director.

Most of her tenure with the district’s child nutrition services came as coordinator of food procurement and then as manager of the new Nutrition Service Center central production facility. Cumulatively, her accomplishments have made her the 2013 Silver Plate winner in the Elementary & Secondary Schools category.

Those accomplishments include working with a local chef to produce high-quality meal choices that meet or exceed federal requirements and can be produced in the district’s central kitchen; establishing Student Nutrition Advisory Councils to provide students with a way to weigh in on potential new additions to system menus; being an early adopter of local sourcing for the district’s fresh produce needs; using grant money to create 27 (to date) school gardens to provide fresh produce for cafeterias and other outlets; introducing grab-and-go breakfasts to 20 schools and launching breakfast in the classroom in 19 elementaries; and creating a departmental Gain/Loss Report to track operational performance at each site.

Bauscher also played a key role in Jefferson County’s early and continuing success with USDA’s Healthier US School Challenge. Its schools have received 77 Bronze Awards, the most of any district in the country when the recognition was given.

She put in 12 years as an account representative with food broker A.J. Seibert Co. as well as Campbell’s Soup and RJR Nabisco. In 1994, she joined the Jefferson County as food procurement coordinator, bringing her experience from the other side of the negotiation table to bear in expanding the number of companies bidding to do business with the Jefferson County system.
As exhibit chair of the Kentucky School Nutrition Association she also expanded the number of vendors showing their products the annual meetings of the association.

Bauscher currently serves as vice president of the national School Nutrition Association and will take over as president in 2014. In January 2012 she received the FAME  Golden Foodservice Director of the Year Award, FAME’s highest honor presented at SNA’s Child Nutrition Industry Conference.

In 1999, Bauscher was asked to take over management of Jefferson County’s soon-to-be-opened central kitchen/warehouse facility. There, she established the key role the operation plays in helping control costs, ensure reliable and consistent product quality and facilitate initiatives like local purchasing.

That was especially important when Bauscher was named director, a role in which she has committed to growing local purchasing. The central warehouse allows easier logistics for farmers, who have only to deliver to one site, while the school nutrition program can use the product in various ways, including processing fresh produce bought during the peak summer growing season in items served during the winter. That is possible because of the facility’s substantial storage capacity.

Bauscher has also initiated a grab-and-go school breakfast program to accommodate students arriving at the last minute on buses. More recently, a breakfast in the classroom program funded through a Wal-Mart Foundation grant has provided morning meals for students in two dozen elementaries with over 80% free/reduced populations. Next up is Bus Stop Café, a refurbished school bus modified to serve as a mobile café for school events and summer feeding.

“As a vendor rep, I had called the Jefferson County coordinator of food procurement about whether a bid we submitted had been accepted and she said, ‘Yes it was and by the way I’m retiring to spend more time with my grandkids and I think you’d be a great replacement. Do you want the job?’”

“I grew up with a mom and dad who were always involved in something. Given that upbringing I got involved in the Kentucky SNA almost immediately after I joined the department. I ran for vice president as soon as I was eligible, that is, after five years of membership.”

“I worked for University of Kentucky foodservices for five years while getting my BS is in clinical dietetics and studying nutrition science in grad school. While still a student, I became a full-time supervisor, basically managing a cafeteria, and that sparked my interest in foodservice management as opposed to clinical dietetics.”

“My mother was a school cafeteria manager. Eventually it dawned on me that while I’m not doing exactly what my mom did, I am in a way doing what my mom did.”

“There’s this big move to back-to-scratch cooking in school nutrition. I say we already do scratch cooking, we just do it in a 200-gallon kettles.”