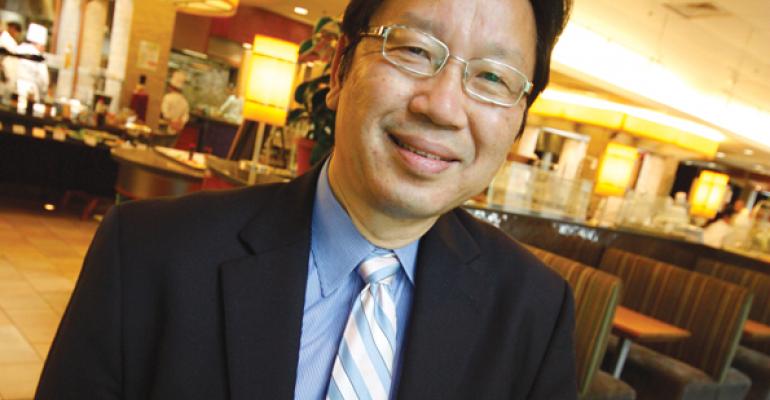 Believe it or not, Ken Toong at one time wanted to be a banker. Toong is one of the most recognized figures in the college dining segment and it’s hard to picture him with such a green eyeshade demeanor, despite his great facility at managing financials.

It is both for his excellence in developing and administering the dining program at UMass and for his other activities supporting the college dining segment—including Taste of the World—that Toong has been recognized with the 2013 Silver Plate Award in the College/University category.

Toong started his career (after deciding not to pursue a banking career) at the University of Saskatchewan as a foodservice manager working for the Canadian division of Marriott Management Services.

Over the next 15 years, the company reassigned him to the University of Alberta and then Trent University. That’s where, in 1994, he organized and held the first Taste of the World conference.

Originally designed to be simply a campus vegan workshop (which was itself a rather forward-thinking concept for the time) led by a CIA chef, it drew a couple dozen local and regional Marriott chefs in its first year. Word soon got around and as it grew into an annual event, it began to attract others from the segment as well.

When Toong came to UMass in 1998 he brought his chefs conference along, despite early reservations about having the time to pull it off. After all, for the first time, he was in charge of his own program without the backing of a larger organization like Marriott.

UMass was also substantially larger than any program he had worked with before, and it was in the United States with its subtle and not-so-subtle cultural differences from Canada (Toong says the U.S. generally has lower food prices and greater propensity to accept food waste).

At the time, UMass ran a very traditional dining program for a large state university, with old school, straight-line dining halls and bare-bones retail snack bars augmented by commercial QSR outlets operating limited hours. But the school had greater ambitions, and Toong was engaged as the point man to bring them to life.

His first great success was a redesigned dining hall at Berkshire Commons, which became the crown jewel of the campus dining program when it opened in 2007. Ambitious plans call for an outlay of around $70 million to renovate three other dining halls over the next five years.

All of that will be self-financed by UMass dining, so Toong has had to don his banker’s hat to figure ways to raise the money. Much of it will be from doing the same kinds of things he has done since coming to Amherst: providing customers with attractive dining options in customer-friendly, convenient ways that spur spending.

That includes revenue from day-to-day cash sales at retail outlets and also the sale of meal plans. The number of plans sold boomed from less than 9,000 in 1999 to nearly 16,600 last year. Revenues increeased 36% in the last three years alone.

And Toong isn’t finished. He has his eye on those members of the campus community who have not yet signed on to meal plans, especially graduate students living off campus. The goal is to hit 20,000 meal plans in the next two years.

“I went to college in Canada for a business degree and worked in banking for a while. While in school, I got a job as a potwasher. It lasted only one day: I fired myself because there were too many dirty dishes.”

“After a couple years with the bank, they wanted to transfer me to Newfoundland but I didn’t want to do that, to be a bank manager, because I prefer working with people. I saw an ad from Marriott in Canada and the rest is history.”

“I didn’t know much about UMass at the time except that it was rather prominent in basketball and that the school was pretty large. It was a very fundamental, very basic program at the time.”

“I remember the first day I told everyone I wanted to make UMass one of the best dining programs in the country. Some of them looked at me like was crazy.”

“This may be part of my Marriott background, but I think that whatever business you are in, you should be one of the top three or else you shouldn’t be there. Banking taught me discipline and Marriott taught me about customer service.”