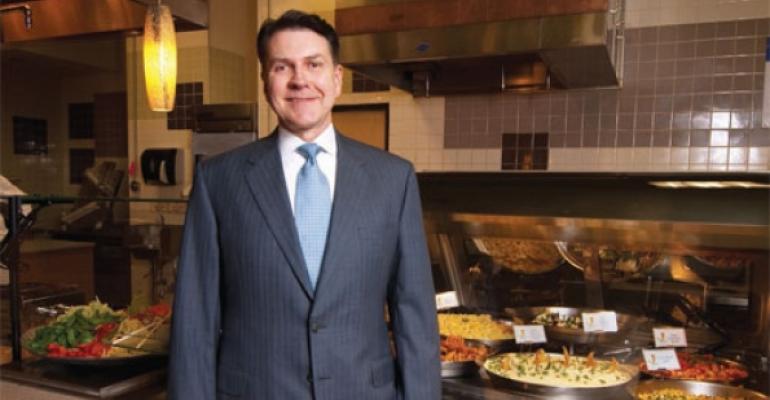 While growing up in Haverhill, Massachusetts, Steve Sweeney spent his summers working in the kitchen of an uncle who operated a resort in nearby New Hampshire. He recalls thinking “that hospitality seemed like a good business to be in.”

That view hasn't changed as Sweeney today oversees Chartwells, the North American education division of global contract services giant Compass Group. It's one he's held since Chartwells was first created in 1997, only a few years after Compass Group had entered the U.S. and after it had completed a flurry of regional management company acquisitions.

As the company pursued the market strategy it called “sectorization,” it created Chartwells to consolidate the education accounts previously serviced by Daka, Flik, Canteen and PFM (Professional Food Management) making it Compass Group's second major sector brand in the U.S.

Under Sweeney's oversight in the years since, Chartwells' three divisions — Higher Education Dining Services, K-12 Dining Services and Flik Independent School Dining Services — have grown in size and scope from $365 million to the $1.6 billion Chartwells generates today. Along the way, Chartwells has established itself as a premier foodservice brand in the outsourced education market, and established a track record that helped earned Sweeney this year's Silver Plate award in the Foodservice Management category.

But all of that was far in the future for the young cook and dishwasher back in Massachusetts and New Hampshire. His career path at the time took him first to the state's Essex Agricultural and Technical Institute, where he earned a degree in hospitality management. By graduation, he was working nights at a local restaurant and soon after was recruited by Servomation, a vending contract services company that had been looking to move more aggressively into the manual foodservice arena for over a decade.

“I went into its ‘Institutional’ group kicking and screaming,” Sweeney recalls. “I didn't think I was going to like it and wouldn't give up my restaurant job at night.” Still, that early opportunity proved auspicious, and his work ethic paid off. After five months at Servomation's South Postal Annex account in Boston, Sweeney was asked to come down to the Purchase College-State University of New York campus for a weekend, to help the company open that account. SUNY-Purchase was the first operation Sweeney worked at during his Servomation days.

“I went down with my belongings in a duffel bag and never came back,” he laughs. “Those were long days and nights, but I never said ‘no’ to an assignment.”

He worked the Purchase account for the next five years, along the way making the acquaintence of Rudi Flik, then running his own fledgling contract services company that was operating dining services at Manhattanville College, just down the street.

“Flik had put in a bid to operate Purchase the year before, but Servomation had retained the business, so we had met then,” Sweeney says. “A year later, the director's position opened up at Manhattanville. Rudi interviewed me for it on a Saturday morning and offered me the job.” Again, it proved an auspicious career move. Sweeney stayed with Flik for the next 17 years, eventually becoming vice president of operations, until Flik was acquired by Compass in 1996.

An accomplished chef, Sweeney has been active in a variety of organizations including the Chartwells Diversity Council and the Women's Leadership Network. He actively mentors within his own organization and works frequently with schools like the CIA and Johnson and Wales on career development programs. Most recently, Sweeney was named as one of the three top industry executives selected by the White House to define healthy eating for K-12 students as part of First Lady Michelle Obama's “Let's Move” program.

My greatest achievement has been the role I’ve played in the formation and growth of Chartwells. Flik was the second Compass acquisition in this country; when it looked to combine the education accounts of PFM, Daka, a slice of Flik and parts of Eurest and Canteen...I didn’t have to think twice when I was asked to take the helm.

Compass had a great model for bringing new companies on board. I had come in an acquisition and was sensitized to what people in the other companies were going through. It was an exciting time—we were forming a new, national company and brand almost overnight.

The 17 years I spent with Rudi and Julie Flik were the most formative in my career. The company grew from a two million dollar business with five accounts to over $50 million in managed volume when it was acquired by Compass. What made the Fliks so dynamic was how they complemented one another. Rudi was out there in operations, elevating the quality of foodsevice, doing things on college campuses in the 1970s that no one else was doing. Julie was the face of the company, the marketer, very focused on account relationships.

They were creative and entrepreneurial and, I would say, frugal. They lived within their means and earned everything they got. They had a good partnership—it takes a special couple to work in a family business, spending all day and night together and still making family and work balance. They had a great influence on me and how I approach the business and, in a way, I feel this award should really be going to them.

Gary Green and Rick Post have also really influenced me. Where Flik was a regional company, they provided a much larger, global perspective on the business and a focus on areas like purchasing, accounting and the other resources Compass needs so those of us in the market sectors can take care of day to day business.

We’ve always referred to our market strategy as sectorization. I think the word “segmentation” almost suggests a connotation of “divison,” or “separate,” but sectorization was a friendlier word. It meant being part of a group.

Lessons learned? It is knowing when to lead and when to listen. Knowing when you have to take charge and make things happen, and when you instead have to listen to customers and associates and be approachable. You have to take total ownership and expect the same from your people. Also—keeping your vision simple but meaningful. That is why we came up with the Eat—Learn—Live tagline. We use it worldwide in the education market. It is a simple message, but our associates get it, our clients get it, our customers get it.

What do I spend my days doing? You can’t lose sight of what you are here to do— drive the top and bottom lines and ensure you have happy customers. You schedule meetings and calls and stay connected with your associates, but there are always surprises that come your way, often early in the day. When someone rings me up, it is usually not to tell me how fabulous things are!

The highs are great—what’s not to like? But the lows are low. You have to celebrate the highs and attack the lows. How you deal with and manage difficult situations tests your organization and shows its capabilities and depth. In the end, clients hired companies so they can depend on them to manage those situations. How you do it determines how they feel about your company.

When you work in education you are constantly in a learning environment and you are surrounded by people who are there to learn, to teach and improve themselves. It is just a great place to be. Universities and schools are not like corporations that may move to a new town or go bankrupt. There are other challenges, of course, but there is also a sense of stability that comes from knowing the institution is there to stay.

Longer term, I see universities evolving to more effectively blend with their communities. Universities are not walled campuses—the walls are coming down and that will change parts of the model. They will expand to a bigger part of the community in which they exist. There will be more movement of people in the community into and out of the campus and universities will serve more people than just students and staff.

K-12 has come a long way over the years I’ve been in the industry. The recent efforts of Michelle Obama and the Let’s Move and Chefs Move campaigns have helped bring school nutri— tion to the forefront. While it emphasizes the obesity issue, it recognizes that school foodservice is not what is making kids obese. These initiatives are looking at the supply chain, at messaging, labeling, everything. We will see good things come from it. We need everyone—the community, the parents, the teachers, the districts, the operators—to pull together and work in unison.

If you look around the world, the U.S. national school lunch program sets the standard. In many countries, school food is little more than a snack program. Sometimes we are hard on ourselves, but the rest of the world admires us for what we accomplish in K—12.