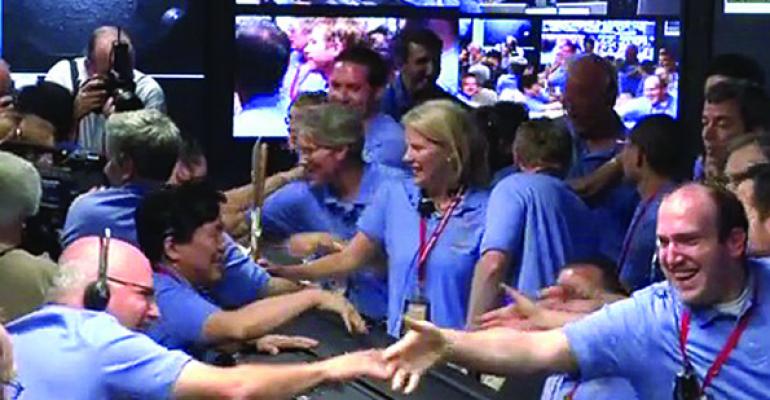 As the Mars Space Rover, Curiosity, entered the final minutes before touchdown on August 5, thousands of scientists, engineers, guests and officials held their collective breath at the Jet Propulsion Laboratory.  But moments after the 10:37 p.m. (PDT) landing , barely-managed pandemonium broke out across the JPL and nearby Caltech campuses. See the video.

Meanwhile, behind the scenes of this technological feat, the campus dining services department from Caltech was hard at work preparing, delivering and serving  over 9500 meals from Friday, August 3 to Monday August 6 to thousands of visitors and staff, many working around the clock at the Lab that weekend. 1900 more followed the landing on NASA TV at nearby Pasadena City College and 3200 more at Caltech. About 10,000 meals were served in all.

"We had been planning for this event for six months," says Bonnie Gerszt, the dining and JPL store liaison.  "Managing the constantly changing dropoff times, locations and orders, from different entities across the facilities,  was one of the biggest parts of the job."

Staff from Caltech Dining, which manages JPL foodservices, set up a separate production center in one of the JPL cafes just to support the VIP events. Another Caltech team worked from a different facility to support all the employee events.  "It was a smart move," says Gerszt. "It was like having two project teams and two production facilities."

Keeping the menu simple was key.  VIP guests were served petite sandwiches and pinwheels,  cheese, fruit and nut platters and bite-size dessert bars; MSL and Lab workers  were fueled over the weekend with boxed meals, continental breakfast and Southwest buffets along with snacks, desserts and Mars Bars. Plenty of coffee and "Martian" water kept them awake and hydrated.