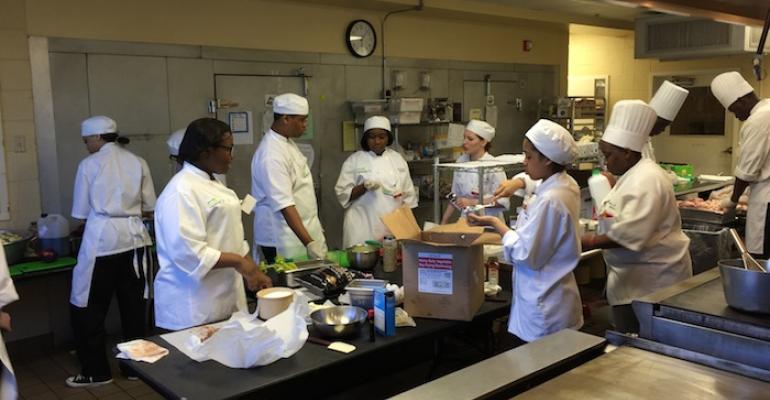 That is the basis on which an annual event called Taste of Future Chefs turns at Methodist Manor, a continuing care retirement community (CCRC) in Florence, S.C. At the event, 20 to 30 students from the culinary arts program at nearby Florence Career Center gather in Methodist’s kitchen to prepare a multicourse dinner feast for the residents, plus a limited number of guests.

“We help and coach them,” says LeVance McIver, executive chef and director of dining services at Methodist Manor, says about himself, his staff and the teachers at the career center, “but they do most of the work.”

Everything is prepared onsite in the Methodist Manor kitchen over the course of several days, using fresh ingredients.

“The students typically come after school for several days prior to the event to prep the dishes,” McIver says. On the evening of the event, the food is then served buffet style with separate stations manned by the students offering servings of the various creations. It is something the residents look forward to.

“They like going around and talking to the students about how the dishes were prepared, and of course they enjoy the food,” McIver says.

This year saw about a hundred of Methodist Manor’s residents in attendance, along with some members of the students’ families and faculty/staff from the career center, where the culinary arts program is overseen by Chef Tyrone Atkinson. The seating is limited by the size of the room.

Taste of the Future Chefs is not a simple meal to pull off because it involves creating 35 separate food and beverages choices, from appetizers through soups, entrées and salads to desserts. They included fairly complex creations like a lasagna soup, grilled stuffed peppers and amaretto apple streusel cupcakes.

This is the sixth year for the Taste of the Future Chefs event at Methodist Manor. “I came up with the concept in 2009 after viewing these kids’ talent at one of the Pro Start culinary competitions, so I talked to them about doing something here in our dining room for our residents.” [Editor’s Note: Pro Start is a National Restaurant Association initiative designed to develop foodservice careers at the high school level across the nation.]

The students developed the menu in consultation with McIver. “Chef Atkinson at the career center first gives them a bunch of recipes and they select the ones they would like to try,” he explains. “They then submit them to me and I go through them to choose what I think the residents would like, and also things that would not typically be on the menu here so that they are special treats.”

It’s quite interesting to have 30 students come into your kitchen who have never been in there before, McIver says. “And,” he adds, “this is along with our regular meal production. We still have to serve three other dining rooms at the same time.”

Methodist Manor accommodates around 230 residents, of which 125 reside in independent living units. The rest are in assisted living and skilled care.

McIver, a Johnson & Wales graduate who previously served in country club dining, is responsible for the daily meal service across the complex. “I’m still serving some of the same customers because some who were or still are members of the country club are living here now,” he laughs.

He notes that other than providing a monotony breaker for the residents and a real-world professional experience for the students, the Taste of the Future Chefs events also expose the students to a side of the foodservice industry they may not even have been aware of. In fact, he says, “I’ve hired quite a few of them yearly and they work here until they go off to college.”