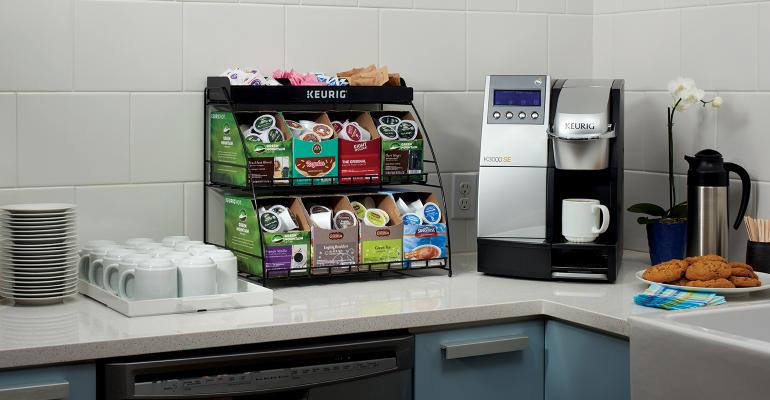 Brewing up change in senior living

Baby boomers have been recognized as being change makers since they came of age in the 1960s and 1970s. These days, though, this influential group is shaking up the senior living segment.

Boomers take their coffee as well as their food seriously. It was the post-World War II boomer generation that first embraced specialty coffees and the American culinary revolution. Today’s 60- and 70-somethings are not about to leave their homes and their independent lifestyles to move into communities that offer lackluster chow and generic java.

In fact, having a coffee shop at a senior living facility was important to 72 percent of people choosing such a facility for a friend or family member, according to the Creative Concepts Senior Living report last year published by Datassential, a market research firm in Chicago.1

Today, a modern senior living community is likely to have a wifi-enabled coffee shop, along with a casual bistro, wine bar, and formal dining room with exhibition kitchen, says Datassential.2 Many facilities are upgrading their coffee programs “to provide coffee-shop-level drinks, from iced coffees to flavored espresso beverages,” Datassential says.3

A simple way to bring better coffee to seniors without operational complexity is with single-cup brewers. These devices brew one cup at a time using a sealed pod of ground coffee. The pods are available in an array of coffee roasts, blends and flavors, making it easy to offer a wide assortment. A well-known example is the Keurig® brewing system.

“If you create a community setting that is attractive, that has a higher level of socialization and amenities, the hope is you are going to attract people to leave their homes and come into a community [earlier],” Servant notes.

Many senior living facilities are renovating single, large, formal dining rooms into multiple venues with varied themes, “ranging from a [cafe]-like social gathering place to casual-dining experiences,” Servant says. In some facilities, residents sip lattes and cappuccinos prepared by a barista at a coffee kiosk.

Residential communities for active seniors are increasingly visible in the Denver area, observes Latasha Poindexter, vice president of consumer insights for Food & Drink Resources, a restaurant and food and beverage consulting company in Centennial, Colo. Such establishments often have sleek architecture and a wealth of entertainment and lifestyle amenities for residents, including movie screens, theater productions and onsite restaurants.

“They are also starting to have social hours for residents with coffee and tea,” Poindexter says. Operators should keep in mind that boomers are becoming more interested in healthful options as they age, but they still insist upon flavor and value, whether it’s a cup of coffee or a meal. “They translate value not as a cheaper price, but as a fair price,” Poindexter says.

Given their sheer numbers, the boomers — estimated at 75 million4 strong — are a key demographic for senior living. They are trickling into retirement communities now, but that rate will accelerate in a few years. “This is going to be a tsunami, let alone a wave,” says John Rifkin, senior corporate executive chef of Morrison Community Living, based in Atlanta, part of Compass Group.

With the influx of boomers in mind, Morrison has been upgrading facilities and menus in its retirement communities, which number more than 450. “In our communities, we almost need to have a pop-up restaurant mentality, so we can be nimble enough to change gears from time to time and satisfy customers who eat with us every day,” says Rifkin. For example, a fast-casual operation that serves coffee, breakfast and lunch is designed to switch menu and theme later in the day to become a pub that offers small plates, cocktails and local beer and wine. “We’re opening a ton of pubs,” says Rifkin.

The coffees these venues serve are selected with an eye to eco-friendly production, as well as flavor, also important to boomers. “The first step was finding sustainable coffee, now it is about flavor,” says Rifkin. “It’s about steamed milk and added flavors, not just an ordinary black cup of coffee anymore.”

What’s more, cafes in senior living communities are modeling the social environment of coffee shops. They are comfortable, welcoming spaces where residents can meet with companions, log into the internet and relax over coffee. “If you create that environment, they will use it,” says Rifkin.

Unidine’s Servant sums up the transformations in senior living. “The days of stereotypical nursing home food are long gone,” he says. “A care provider will not survive long with that mentality. So you can expect to see a lot of upgrades and changes.”