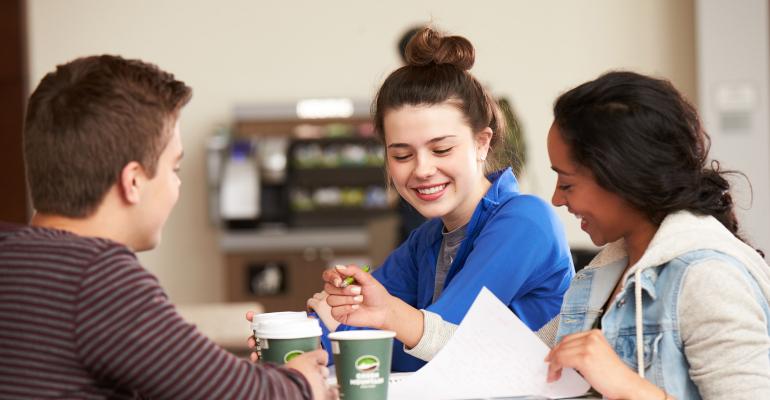 Colleges and universities utilize a variety of service options to meet students’ mounting expectations for coffee.

College campuses are running on coffee more than ever as higher education foodservice providers offer more options to satiate students’ cravings for a broader variety of types and flavors.

“More of us are drinking coffee, and younger consumers appear to be leading the charge,” Bill Murray, National Coffee Association (NCA) president and chief executive said in a recent statement. “A steadily growing taste for gourmet varieties is also driving a wider trend toward specialty beverages.”

According to the NCA’s 2017 National Coffee Drinking Trends report, “The percentage of Americans drinking coffee on a daily basis increased to 62 percent this year, up from 57 percent in 2016.”

When it comes to coffee, what’s hot is cold. Where foodservice operators once offered it as a summer-only beverage, they say they are now brewing traditional iced coffee, cold brew and nitro (cold brew that is infused with nitrogen) — and a lot more of it — year-round.

For example, at Florida State University (FSU) in Tallahassee, Fla., where students have more than two dozen outlets from which to purchase coffee, cold coffee is popular all year long.

“Iced coffee in dining halls is as important or more important than regular coffee,” says Jay DeGioia, district manager for Sodexo, FSU’s foodservice provider. “Here and at the last few schools I’ve been, I’ve seen a huge uptick in nitro and cold brew.”

Iced coffee is also a big seller for Dunkin’ Donuts, which has been expanding its partnerships and presence on higher education campuses over the last decade.

“Iced coffee is a big part of our menu in higher education spaces, as is some specialty coffee, like our new cold brew,” says Chris Burr, Director of Non-traditional Development at Dunkin' Donuts.

Some call it “handcrafted,” others “boutique” or “slow,” but by any name this is premium coffee made with natural ingredients and customized to individual preferences — and its popularity is growing on campus, say foodservice providers.

“Coffee is one of the most important categories in the higher education segment,” says Karen Cutler, a spokesperson for Aramark, which serves approximately 400 campuses across the country. “Our college consumers want coffee 24/7, 365; they want quality and convenience, and they want to be able to personalize their coffee.”

To offer a variety of roasts and flavors to their campus customers, many colleges and universities are going beyond just bringing national brands such as Starbucks, Dunkin' Donuts, or Green Mountain Coffee on campus and are partnering with local coffee brands as well.

To deliver on that, FSU recently embarked on a partnership to bring Lucky Goat Coffee Company, a Tallahassee. Fla.-based roastery, tasting room, and distribution company, to the FSU campus.

“They value relationships with customers, growers, and each other — which makes for the perfect pairing at Portland State University, where guests value and choose to support local Portland brands,” says a spokesperson for Chartwells, PSU’s foodservice provider.

Similarly, “Aramark’s strategy has been to offer a mix of brands across the 400 campuses we serve — national, proprietary, and local — to capture individual consumer preferences and support local community businesses,” says Aramark’s Cutler.

While there are more options for purchasing coffee on campuses, some college students are brewing up single cups in their dorm rooms and throughout campus. To support students who want to make their own brew, foodservice providers such as Sodexo and Chartwells say they stock single-cup coffee in convenience stores and coffee shops on campuses where there is a demand.

Brands like Keurig Green Mountain are helping campus operators not only to meet their customers’ demand for popular single-cup options, but also are making it easy to deliver the coffee quality and beverage variety that college and university customers demand.

“By offering a beverage solution with 30-plus well-known and beloved brands of hot and iced coffees, tea, cocoas, and more, Keurig Green Mountain helps college and university foodservice directors to meet the broad range of beverage occasions that students, faculty and guests have throughout campus with one single solution,” says Brian Vetter, vice president, sales, Keurig Away From Home Foodservice.

That demand for single-cup brewing may grow as the next generation heads off to college. New data from the NCA shows that nearly one-third of American households now own a single-cup brewer, up from 29 percent in 2016. Thirteen- to 18-year olds reported that single-cup ownership in their households jumped from 23 percent to 31 percent over the last two years1.

Whatever the trends might be, it has become clear that coffee in all of its iterations will be playing an even greater role in campus foodservice operations in the future.