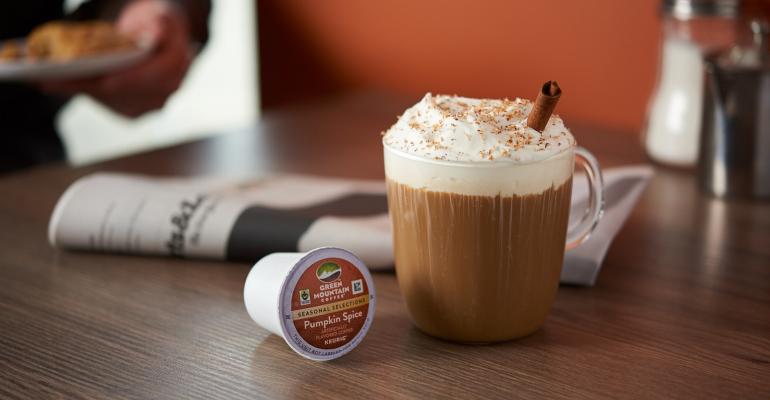 For Every Season There Is a Coffee

As the weather changes, so do Americans' beverage preferences. Consumers look forward to certain flavors in the fall, and they attach different memories or feelings to these flavors.

Operators can help create an emotional connection with consumers as well as drive traffic and boost sales with limited time offers (LTOs) that answer consumer demands for something old, new, and flavorful on their beverage menus.

According to the National Coffee Association, seasonal flavors are one of the top five trends in coffee this year. The most popular fall flavors are pumpkin, clove, and cinnamon. In the winter the popular flavors are chestnut, peppermint, and winter spice.2 In fact, pumpkin spice flavored coffees are up 88 percent on restaurant menus over the last four years.3

The Florida State University Starbucks, operated by Sodexo, offers seasonal beverages including the PSL. “This is the most popular drink of the year,” says Jay Degioia, district manager for the universities segment for Sodexo.

At Boston College there are different beverages every season at Chocolate Bar, Hillside Cafe and McElroy Eagle Mart. “In the Fall, the pumpkin spice latte is always a crowd favorite as well as a Pumpkin Chai Tea Latte,” says Beth Emery, director of dining services at Boston College. “Also in the fall we offer Hot Apple Cider.”

Emery adds that the Christmas holiday season is the time of year when dining services offers the most seasonal flavors and limited time offers. “We offer gingerbread latte, eggnog latte, peppermint mocha, and cinnamon hazelnut latte,” she says.

At University of Connecticut Storrs, the fall selections include Pumpkin flavored Lattes, hot and cold cider, and Pumpkin-flavored coffee. In the winter there is Peppermint flavored Hot Chocolate, Peppermint flavored Mocha, hot or cold eggnog and Winter Spice Coffee. “Pumpkin lattes and peppermint mochas are the most popular of the list,” says Ethan W. Haggerty, area manager for UC Cafés & Dairy Bar.

Eggnog is another winter favorite, and traditionally contains eggs, milk, sugar, and spices.5 At the University of North Dakota, Stomping Grounds Coffee Shop in the Memorial Union offers Eggnog Latte as an LTO.

Nancy Garcia, barista manager, says UND introduces this secret recipe holiday crowd pleaser right after the Thanksgiving holiday. Winter is not the only time for seasonal coffees as LTOs. Stomping Grounds offers cold brew coffee from March 1 until Nov. 1. “The lines of customers couldn't be longer,” Garcia says. “Everyone loves our cold brew.”

Other cold beverages also work well in summer. The Apothe Café at West Park Hospital in Cody, Wyo., offered Lavender Lemonade this summer. The drink featured yellow lemonade, ice, and lavender syrup. “The popularity of the lavender lemonade is slowly increasing,” says Amy Olson, foodservice director for Thomas Cuisine Management, which provides the foodservice operations at the facility. “Most people who try it really enjoy it. Some of the feedback that we have been getting is that it is sweet and refreshing, the perfect summer drink.”

Operators say LTOs can be effective throughout the year. Recently, Morrison Healthcare’s Copper Spoon, a branded coffee shop program, added bi-monthly LTOs and saw increased beverage sales with infused tea programs, cold brew coffees and ethnic or regional influenced beverages. At one location in South Florida, Morrison opened a new Copper Spoon that serves a menu that reflects the regional preferences featuring a Café Bustelo coffee. That program was so successful that Morrison added Cuban coffees such as Café Con Leche and Café Cortadito to the list of LTOs.

Consumers can prepare their own coffees and teas with seasonal flavors, using single-serve coffee machines. Seasonal favorites that are available in single cup format include Green Mountain Coffee® Pumpkin Spice, Cinnamon Sugar Cookie, Toasted Marshmallow Mocha, and Island Coconut®.6 These flavors are available for commercial establishments, through the use of Keurig® commercial brewers. Locations that do not have a full coffee program, such as small on-site cafeterias or student lounges, can create coffee stations that feature single-cup brewers to offer these seasonal beverages. Also, establishments that have batch offerings can add incremental sales, especially with impulse purchase seasonal coffees in a single cup program.

According to the NCA’s Single Serve report, 18 percent of coffee drinkers say that using a single-cup brewer is the only way they know how to make coffee. In 2016, 28 percent of daily consumers reported drinking single-cup coffee the day before.7

Still, between 20 percent and 30 percent of single-cup brewer owners claim they do not know if they can make premium coffee beverages. Operators can take advantage of this by promoting their coffee programs using point of purchase materials and menu call-outs.