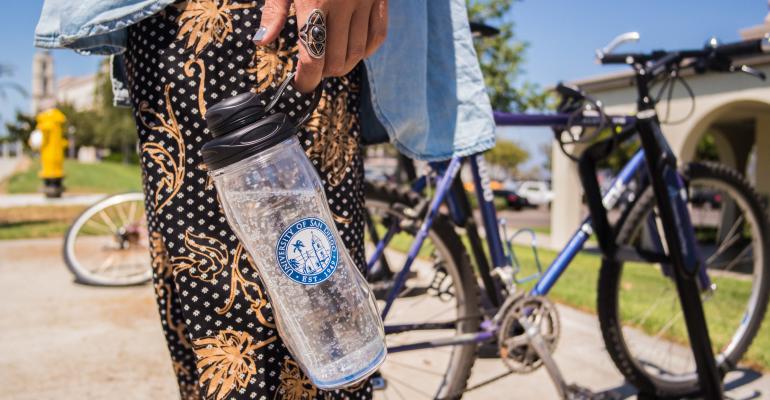 California is in the fourth year of a severe drought, and the University of San Diego is using an innovative bottle refill program to help save water.

By executive order Governor Jerry Brown mandated that California reduce its water consumption 20 percent by 2020. Residents are implementing various efforts such as taking faster showers, turning off the faucets while brushing their teeth, and rethinking their water-intensive landscaping.

In San Diego, the drought is especially dramatic because the city is in a semi-arid area that receives less than 12 inches of rain per year. San Diego imports 80 percent of its water, so conserving it is a top priority. 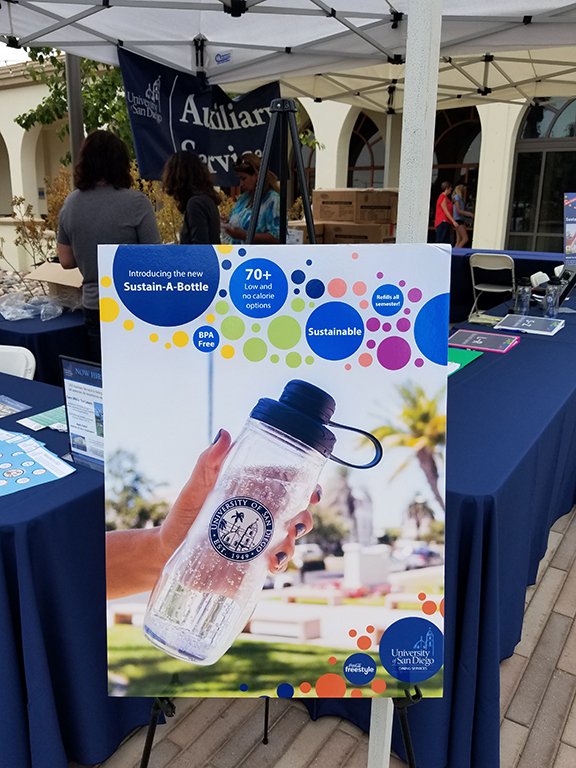 USD is doing its part by partnering with Warren, Pa.-based Whirley-DrinkWorks! to offer students a way to save money and use less water with its Sustain-A-Bottle Freestyle program. The program includes a reusable "smart" bottle that has a unique radio frequency identification  (RFID) chip that allows the student to purchase a semester's worth of refreshment at one time. Instead of buying a paper cup of water or other beverage at the university dining services locations, the student puts the prepaid bottle in one of the Coca-Cola Freestyle beverage machines on campus, presses a button to fill up with a beverage, and skips the cashier line. The Coca-Cola’s Freestyle machine offers 70 low- or no-calorie options, and the Whirley-DrinkWorks! bottle is BPA-free and has a carbon-neutral footprint.

While most consumers know that using refillable bottles instead of buying single use water bottles can help prevent plastic from going into landfills or becoming litter, it turns out that using refillable bottles can also save thousands of gallons of water each year. In fact, the USD website, citing numbers from the blog Ban the Bottle and the Mayo Clinic, noted that drinking water from the tap or a reusable water bottle can save around 547 gallons of water per year. More figures come from the think tank Pacific Institute: it takes two liters of water to manufacture a one-liter bottle of water.

During new student move-in weekend in August, USD  distributed free Sustain-A-Bottles to required, resident, meal plan holders. The university set up a booth in a high traffic area outside the Torero Store, which is the bookstore, where these meal plan holders simply had to sign up for their free bottle.

“We gave these out as a special welcome to our new Toreros, as a thank you for being a meal plan holder, and to help jumpstart the new bottle program on campus,” says Loryn Johnson, director of marketing, University of San Diego Auxiliary Services. “As they received the bottle we took the opportunity to explain the program and recommend that they purchase a semester plan.”

The bottle came with two free fills, and the bottles also contained a paper marketing insert that explained the program. Johnson says USD also spread the word via social media, including Instagram, Facebook and Twitter. She adds that planning for the launch of this program began several months before the event, with collaboration between USD Dining and the vendor partners Whirley-DrinkWorks!, its wholly owned subsidiary, Bradenton, Fla.-based ValidFill, a company that Whirley-DrinkWorks! launched in 2009, and Coca-Cola.

The move-in event was successful. “We handed out over 500 bottles in just those two days,” Johnson says. “We maintained a smaller booth inside our largest dining facility for the next week to be sure most students received the bottle.”

In addition to the move-in day event, USD students and others can buy a Sustain-A-Bottle any time from the dining locations campus wide. A bottle costs $9.99 and comes with two fills. The purchaser then selects a plan, either unlimited fills all semester for $28.99 or 10 fills for $12.99.

The goal of the program is to provide a more sustainable beverage program on campus. “For every Sustain-A-Bottle used by a faculty, student or staff member we are keeping a disposable cup, straw and lid out of the landfill,” Johnson says. She adds that the program provides a great savings for customers when they utilize the semester fill plan.

There are water savings too. Johnson, citing a study reported in the Boston Globe in 2014, says it takes 8,095 gallons of water to make 10,000 paper cups with sleeves. “At USD we can make a significant impact on reducing those gallons of water consumed by incenting as many student, faculty and staff to use a refillable vessel instead of a disposable cup,” she says.

USD is the first campus on the West Coast to offer the program, and Johnson says the university has plans for even more water-saving and environmentally friendly efforts. “We are considering embedding the bottle into our future Meal Plan program to create a more seamless experience for students,” she says. “The innovative technology of the Coca-Cola Freestyle machine and the ValidFill vessel are a good fit for the University of San Diego and we are excited to be early pioneers of this program.”