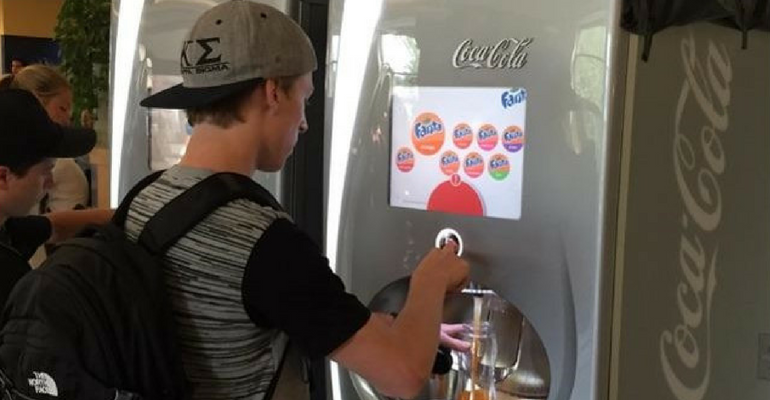 College-aged consumers are big fans of made-for-me experiences. And when it comes to beverages, the explosion of bottled and canned beverage choices in recent years has indulged their desire for a variety of thirst quenching options.

For college dining services, however, the option for students to create a personalized beverage of their choice is a reality with the Coca-Cola Freestyle dispenser and its exclusive, customizable menu of beverage flavors and styles.

The Coca-Cola Freestyle touchscreen dispenser encourages students and other users to experiment and to design their own signature flavors. They can choose from hundreds of combinations of 100+ beverages, including 70+ low- or no-calorie beverages, 90+ caffeine-free options and a total of more than 80 unique brands.

A newly introduced Coca-Cola Freestyle app raises the bar on personalization. Users of the app can now design up to three beverages, and name and save them for future reference. The app creates a 2D bar code that any Coca-Cola Freestyle unit can read, and then mix and pour the desired recipe. The app also encourages amateur mixologists to share their favorite concoctions through a one touch link to social media channels.

The ultimate goal is twofold:   one to attract students and faculty with semester-long all-you-can-drink plans that include a Whirley-DrinkWorks! “smart cup”, which average about $30. The proven profit model shows increased guest frequency/loyalty with additional food purchases. And maybe just as important, the reusable vessels also carry a green halo, since they replace disposable cups, lids and straws.

Last fall The Ohio State University took the idea of personalization to the next level in a bid to engage students while rolling out its own self-serve beverage program. The Columbus campus worked with Whirley-DrinkWorks! to get the names of incoming first year students and returning sophomores printed on some 16,000 Whirley-DrinkWorks! cups, which were then distributed  dorm by dorm during orientation. OSU’s MyCup vessels came loaded with 10 free Coca-Cola Freestyle pours, giving students the opportunity to try out the new machines and experiment with designing their own favorite combinations. After the first 10 pours they had the option to purchase additional packages.

Creating and distributing the personalized vessels was a strategy to ensure that incoming students received them and had an incentive to use them and convey OSU’s commitment to sustainability. As it turned out, the mugs were a big hit with incoming Buckeyes.

Personalizing the vessels adds commitment and engagement from the students and encourages usage and enrollment in a beverage plan, says Greg Edelson, ValidFill president. “It starts with getting the vessel in their hands,” he says.

“Every college has different goals,” Edelson adds. “We have the ability to customize the program and the needs of the operators to fit into their sustainability and foodservice profit goals with our partnership with The Coca-Cola Company.”

“With the reusable cup, there is a sustainability message and a value message for the student,” he says. “The concession operators love it because it’s a way to 'plus-up' the value of a meal plan, and students who visit campus retail outlets for beverages often purchase other items.” Between the savings on consumables, fountain profit margin and earnings from incremental retail purchases, each reusable cup or bottle drives an estimated $88 in annual profit.

For students, however, the biggest perk that Coca-Cola Freestyle dispensers and ValidFill vessels provide could well be the endless possibilities to make at least one part of their college experience their own.