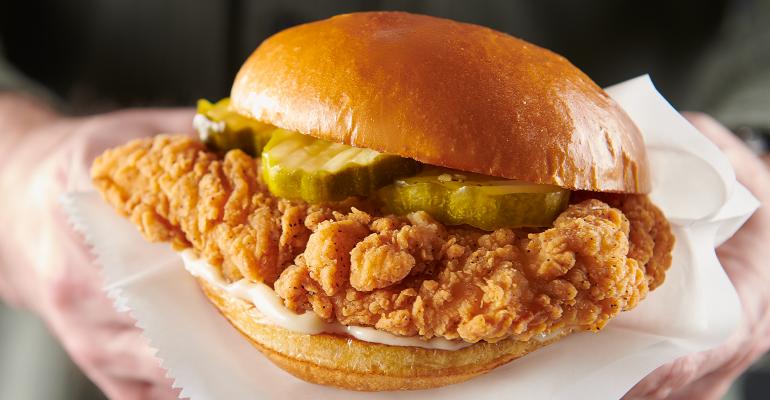 There’s a fight happening. The rally cries are loud. The air is salty. The rivalries are HOT. And it seems like anyone with a bun—and in some cases a taco shell—wants in on the action.

But as more and more brands throw their crispy hats into the ring, it’s pretty clear that only a really impressive chicken fillet can truly compete with the top stars in the arena.

To fully understand the significance of a fillet worthy of a fight, we need to back up to the birth of the fried chicken sandwich wars.

The battle began in 2019 when Popeyes debuted their wildly popular fried chicken sandwich after eyeing Chick-fil-A’s recent and rapid growth in the quick-serve industry with their all-chicken menu.

In the past two years, everyone has been getting in on the fight—from big names like KFC, McDonald’s and Shake Shack to smaller, independently owned establishments. And while some are introducing a chicken sandwich for the first time, others are reformulating and upgrading an existing sandwich on their menu.

The popularity stems partially from the fact that Americans are consuming more chicken and less beef in recent years. Now every eatery wants to capitalize on the boom, but not every fillet is worthy of the competition.

AND IN THIS CORNER

Brakebush just released a real contender for operators wanting their chance to get in on the fight.

Based out of Westfield, Wisconsin, Brakebush has been a fundamental partner of foodservice operators across the nation for nearly 100 years. They produce chicken—and only chicken—and have a lengthy portfolio for menus no matter the daypart or style of cuisine.

Now they’ve added one more to that list: their new Crispy Chicken Fillet. But this fillet (in Classic and Spicy) isn’t just a mediocre hopeful like many other challengers. This thick fillet weighs in at 5.7 oz. and is made the right way: First, tender breast meat is cut about 20% thicker than other fillets, then the whole-breast fillet is tumble marinated driving juiciness and flavor through every inch of muscle.

After that, each fillet is breaded in flour seasoned with salt, pepper, buttermilk and a hint of savory spices, creating a hand-breaded texture and appearance. In the end, you have a crispy, juicy chicken fillet with a hefty footprint when placed on a bun.

If that isn’t enough, Brakebush is turning up the heat with the same crispy, juicy, thick chicken breast fillet with cayenne pepper that’s spicy but well-balanced.

A WIN FOR OPERATORS

Brakebush’s new fillets give operators an important edge, one crucial for going up against the forerunners: the flavor and breading closely mimics back-of-house, scratch-made fillets. Compared to the scores of rushed-to-market chicken fillets out there, this one is an obvious winner.

While a savory treat for consumers, these fillets are a godsend for kitchen operators who want a better way to compete.

Some may be serving a breaded fillet, but one that doesn’t measure up to the titans in today’s headlines. Others might be menuing an impressive, made-from-scratch fillet, but need a contender that is just as good as theirs that saves on time and labor. And the rest aren’t serving any kind of chicken sandwich at all, but still want to get in on the wars.

This new fillet from Brakebush is their answer. A quick entry into the ring with impressive quality to keep them fighting strong. A championship taste that takes just 6.5 minutes from frozen to plate. An option backed by a team from Brakebush to support the cooks, managers and restaurant owners as they add this Crispy Chicken Fillet (Classic or Spicy) to their menus.

Operators who are interested in competing in the chicken sandwich wars with a real contender can find all the info they need at ChickenChampions.com. As for consumers, grab your tickets—the fight has just begun.