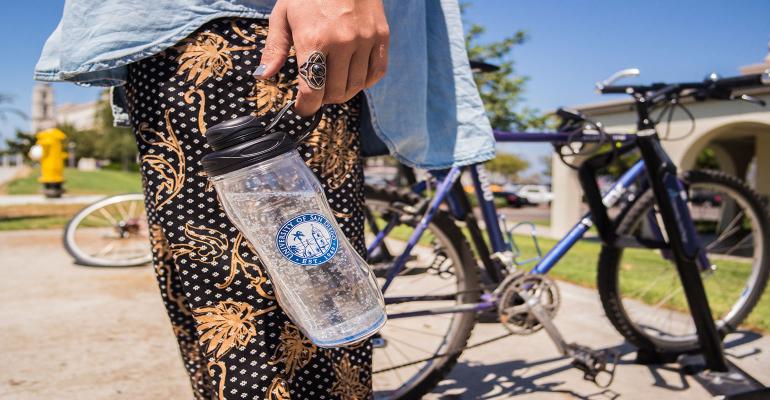 The latter are “smart” cups, mugs and bottles made by Whirley-DrinkWorks! incorporating radio-frequency identification (RFID) technology by Whirley subsidiary ValidFill. Smart containers enable customers to pour their own beverage from a Coca-Cola Freestyle or coffee dispenser without waiting in line to pay. Because smart cups are reusable, they dramatically reduce the number of disposable cups that are used only once. In addition to being convenient and environmentally friendly, smart mugs also hold the potential for higher beverage and food sales and greater customer loyalty. Used in a growing number of colleges and universities, they are now emerging in the business and industry segment too.

Sustainable and successful. At the University of San Diego, the Sustain-A-Bottle program launched with Whirley and ValidFill is an environmental and business success in conservation-minded Southern California.

During orientation weekend, freshmen and sophomores on the meal plan are given a complimentary RFID bottle with two free refills usable at Freestyle dispensers. For $30 plus tax the bottle can be recharged for refills all semester, which costs far less than purchasing soda by the cup. “That makes huge sense if you are buying Freestyle beverages,” says Loryn Johnson, director of marketing/licensing for USD.

Between July 2016 and June 2017, the program diverted 157,120 disposable cups and an equivalent number of lids and straws from the landfill — a 41 percent reduction over what was tossed the previous year.

“It’s one of our core goals to be one of the most sustainable universities in the country,” says Johnson. “Apart from that, there are savings from buying fewer disposables.”

A step further. An RFID mug program for Freestyle is well-accepted at Champlain College in Burlington, Vt., where there are 370 smart cup users among 1,100 students on the meal plan. This fall the Sodexo dining services department implemented a new smart mug RFID program for coffee in partnership with Whirley and ValidFill.

Students simply walk up to a compact coffee dispenser on the counter, place the smart mug on the tray and press a button for a quick fill of hot, freshly brewed coffee. What’s unique is that the same 16-ounce smart mug can be used with both coffee and the Freestyle dispenser.

A plan that allows both coffee and soda fills is priced at $50 for the semester and $80 for the year. The savings are evident. “If you buy three cups of coffee a day, you’re spending $6 a day and $30 a week,” says Rich Dietrich, Sodexo retail manager. “But you can drink coffee with the smart mug for 16 weeks for $50.”

Dietrich says he expects the smart mug coffee program to reduce disposables much like the Freestyle program did. Last year, the program kept 40,000 to 50,000 cups, lids and straws out of the landfill.

The B&I opportunity. Smart tumblers have emerged in the business and industry segment in a pilot program started this summer by Sodexo Canada with Whirley and ValidFill.

In three Sodexo Canada B&I locations, customers use 24-ounce RFID tumblers to skip the line and pour their own Freestyle beverages — including during the hours when foodservice operations are closed.

“This enables us to deliver a beverage offer with maximum choice and minimum labor in environments where our cafeterias do not run for the same hours that populations are in the buildings,” says Michael Varvel, vice president of operations for Sodexo Canada corporate services.

While still early in the test, the pilot program is already taking disposables out of the waste stream. “Last month, at one location, it kept almost 700 bottles from going to landfill or recycling,” says Varvel. “That’s not just a nice-to-have number or an estimate; it’s a hard calculation.”

Encouraged by those results, Sodexo Canada is considering a coffee smart mug program too. “We see that fitting in nicely with the cold beverages as a robust business solution for any business and industry account that we have,” says Varvel.

Rewash solutions. In the same spirit as reusable cups are reusable to-go food containers, as shown by the Chews to Reuse rewash program at the University of California at Berkeley. Students purchase a Whirley reusable to-go container and reusable mug, each for five meal points or $5. They fill the container with food at any of the four dining halls on campus. For the next to-go meal, they bring the rinsed container back and receive a clean replacement.

“One of the keys is having an engaged audience living in the residence halls around the dining halls,” says Sam Lubow, Cal Dining environment initiatives coordinator. “We make it very convenient for them to drop off a dirty container and to pick up a clean container.”