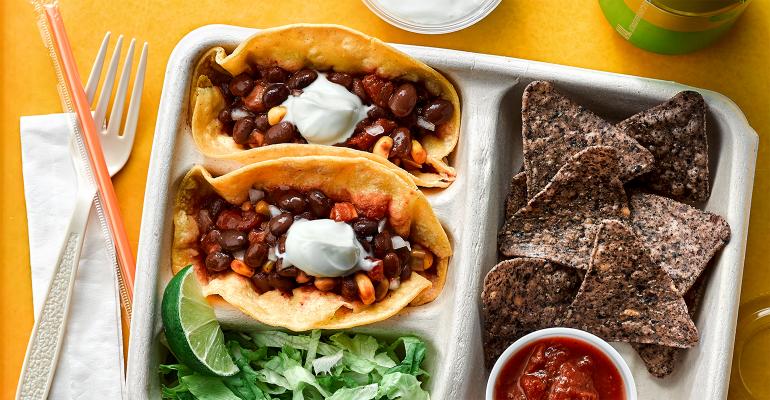 Even the pickiest eaters will try something new if it looks delicious. Many kids today are tasting nutritious, plant-based and plant-forward foods at school, and enjoying them! As a result, many K-12 foodservice directors are finding new ways to feature fun, flavorful meatless foods on their menus, including beans, fruits and vegetables to provide flavor and texture in addition to the nutritional benefits.

According to the Meatless Monday campaign, all 1,800 of New York City’s public schools serve vegetarian meals on Mondays, part of an effort to build an economically equitable, sustainable and healthy food system. Nationwide, other K-12 school systems are menuing nutritious, plant-based foods that are easy to prepare, have low food costs and are well-received by a young audience. Friends of the Earth notes that the Oakland Unified School District in California achieved a 1% cost reduction per meal when it reduced its purchase of animal products by 30% and increased its purchase of fruits, vegetables and legumes by 10%.

If you’re moving forward with your own Meatless Monday or making more plant-based and plant-forward foods available to students, consider these tips to help tempt them:

Although the COVID-19 pandemic has changed how meals are served, visual appeal remains important. Whether on a socially distanced cafeteria line or packaged to-go, the food must look appetizing. “Even as adults you hear the saying, ‘We eat with our eyes first,’ and I think that is something that we develop in our early childhood,” says Ken Oakley, senior brand manager of foodservice for Bush’s Best. “Through the lens of a child, the visual aspect is always going to play the most important role.”

Beans effortlessly stand up to the demands of to-go and are well-suited for making foods look appealing. “Certain varieties can add vibrant color to a dish,” Oakley says. “Others can provide different textures depending on how they are used.” Beans are a nutritional superhero, as they contain fiber and are rich in protein. They are also versatile and can be incorporated into sides, as toppings for salads or as a center-of-the-plate ingredient.

To get students to try something new, it helps to add an element of familiarity. “Some kids might have been influenced to find certain ingredients to be unpleasant,” Oakley says. “It's important that a dish has plant-forward ingredients that are pretty universally enjoyed before branching out to anything too ‘out there.’”

Hummus has universal appeal as a dip or a sandwich spread. While chickpeas are the traditional ingredient for preparing hummus, operators can instead puree white beans, or add different plant-based ingredients to add color, such as roasted carrots, sun-dried tomatoes or avocado. Beans can also be added to such favorites as macaroni and cheese to add texture and protein.

Beans are the quintessential ingredient in Mexican foods, including burritos and tacos. They can also be featured in other Latin-inspired handhelds such as bean and sweet potato empanadas or bean and plantain arepas. Wraps are also popular handhelds, and operators can add zest by including Indian or Mediterranean flavors. Chickpeas are a key ingredient in falafel and can also be presented in new ways such as crispy garbanzo cheese tots or global mashups such as grain bowls featuring Asian flavors.

To generate excitement for these foods, offer a themed menu featuring flavors from a certain region on a given day. For a longer promotion, plan some events around National Nutrition Month in March. Use signage and social media to highlight special menu items from different international cuisines. “Kids do like trying new things and will want variety when it comes to these meatless meals,” Oakley says. “So consider how beans can play a role when building your calendar of meals.”

Sides are an important component of many meals, and beans can play a role in these smaller plates. Try making sliders from quinoa, corn and beans instead of meat. Spread hummus on pieces of toast, much like bruschetta. Have roasted chickpeas available as a nutritious alternative to other crunchy snacks. Don’t forget sides such as “Texas caviar” or bean salad with tomatoes and corn.

Beans can even be part of dessert. Blend Great Northern white beans into a smoothie with yogurt or almond milk, blueberries and bananas, or raspberries and honey. Transform black beans into brownies, pinto beans into custard, or chickpeas into ice cream. Dessert hummus, made with chickpeas or white beans and sweet add-ins, can be served alongside fruit wedges and topped with chocolate, pumpkin pie spice or sprinkles for ultimate kid-appeal.

As part of a familiar dish, puree or other preparation, beans easily add variety and nutrition to students’ meals. “Beans can play a particular role in helping broaden a child’s perspective due to the many varieties that are available,” Oakley says.