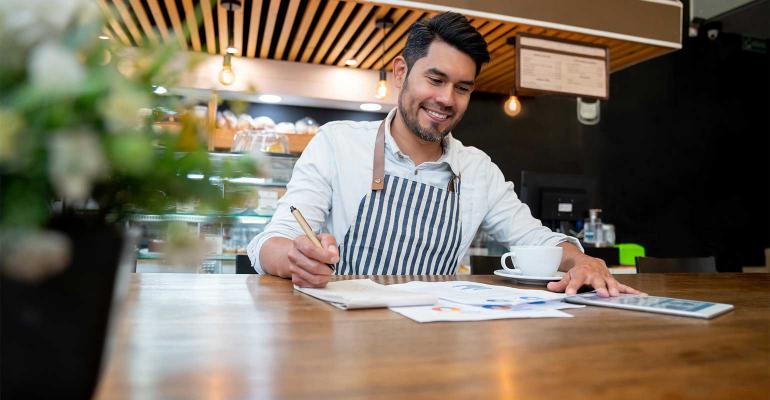 Ideal energy use begins with a usage audit and a forward-thinking upgrade plan.

Foodservice operators are naturally fixated on controlling food and labor costs to increase margins. But according to the U.S. Department of Energy, reducing energy costs at a power-hungry foodservice facility can yield even more profitable results. According to the USDE, every dollar saved in electricity costs yields the same profit impact as boosting sales by $18.

“Energy efficiency is highly relevant regardless of the size of your foodservice facility,” she says. “It’s one of many opportunities to cut costs without spending a lot.”

But in facilities with multiple refrigerators, exhaust hoods and complex lighting systems, how does one know whether its power consumption is optimal or out of line? Ferguson recommends an energy tuneup that includes surveying a facility’s energy usage and equipment performance. To understand what needs fixing immediately, gradually, or at all is a key step in increasing energy efficiency.

R3 design and implementation specialist Eric Mullendore says energy audits begin with a simple Q&A session with a facility manager. In addition to learning about the site’s current energy costs and the manager’s energy-saving goals, the interview explores the audit’s scope and budget. It’s also important to identify any planned equipment replacements or existing performance concerns.

“We want to know what other problems they’re hoping to solve besides just reducing energy costs,” Mullendore says. For example, knowing that a particular cooler isn’t holding product temperatures or that a freezer keeps icing up frequently highlights opportunities to reduce maintenance and energy costs at the same time.

Armed with the operator’s goals, energy auditors examine the facility to ascertain what’s working well, what isn’t and where improvements are needed. Mullendore says the work can take anywhere from 4 to 8 hours and, depending on the foodservice facility’s size, costs about the same as a couple of equipment service calls.

The optimization team then prepares a report detailing the facility’s energy consumption benchmarked against other comparable facilities and opportunities to reduce energy spend. R3 applies a three-tier recommendation structure that allows facility managers to address opportunities all at once or incrementally as it fits within their budget.

“The first tier is low-hanging fruit --- things we say need fixing and can be done easily,” Mullendore says. “It’s simple stuff like fixing strip curtains and gaskets on walk-in doors. Sometimes it’s an operational change such as adjusting setpoints or defrost schedule or making sure staff know to keep refrigerator doors closed as much as possible.”

Small equipment component upgrades form the next tier and usually tap into a facility’s maintenance budget. Evaporator fans are replaced; temperature and pressure sensors are upgraded, and controllers are modernized to improve efficiency.

“The third tier includes real capital investment,” he says. “These would include a new facility control system, replacement of condenser units and compressors and more.”

R3 optimization project manager Christian Alexander says that while some operators might wince at the thought of costly motor replacements for hoods or refrigerator evaporators, many modern motors are designed to be retrofits.

“You’re talking about replacing common shaded pole motors with electronically commutated motors (ECM) that are nearly three times as efficient,” Alexander says. The ECMs are so energy efficient, he says, “the payback time on them can be between six and 12 months and that’s before even accounting for potential rebates from the local electric utility.”

Getting a facility under “control”

The capstone in a modern energy management plan, says Alexander, is a digital building control system that controls and monitors a wide range of equipment either not monitored at all (such as refrigeration compressors) or monitored manually (such as thermostats and temperature gauges).

“This provides the potential to have a brain watching your whole facility a lot like a Nest system for a home,” Alexander says. “All the manual logging of temperatures for the health board, for example, is gone. The inconvenience is removed from the equation.”

With a modern building controller, temperature-regulated equipment can often be managed within tighter ranges, which can allow for higher set points and reduced energy costs. Newer controllers also allow for more advanced control strategies, such as floating head and floating suction pressures in refrigeration systems that can save a lot of energy by allowing the existing equipment to operate at more efficient set points when outside air or load conditions allow.

Not only can building controllers be programmed to alarm operators when any part of the system departs from normal parameters, but they also can provide preemptive warnings when equipment shows stress long before it fails.

“With these controllers, you can get a message that a compressor isn’t getting enough oil, and somebody can be sent to fix the issue before the equipment shuts down,” Mullendore says. “You’re calling for service before the compressor fails and before the freezer temperature rises, so the ice cream doesn’t all have to get thrown out.” Such a scheduled service call is usually much less expensive than the predictably after-hours alternative as well.

A thorough energy audit also helps operators create a sound preventative maintenance plan that can be executed in step with a budget. Their facilities may include older equipment that even continues to perform to spec, but with funds set aside for efficiency improvement, a new model could pay dividends through energy savings.

“Sometimes it’s tough to get rid of a dinosaur of a freezer that’s still doing its job well,” says Rick Ferguson, chief engineer and co-owner of R3. “But if your goal is to reduce energy usage, to save money, an upgrade to something efficient is the best choice to make.”