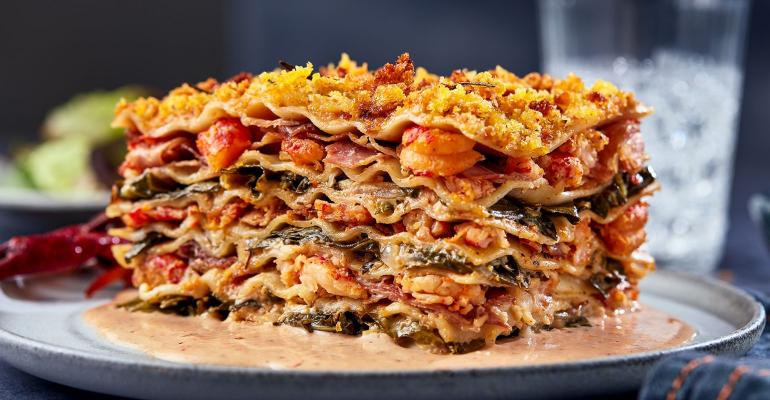 Pasta lends itself to a wide range of foodservice trends, including healthful diets and comfort foods.

Sponsored by Barilla® for Professionals

As colleges and universities reopen their dining rooms and healthcare facilities remake menus for fall, most will feature pasta, a versatile ingredient perceived by consumers as tasty, healthy, and accessible. In October, which is National Pasta Month, culinarians have even more reasons to experiment with pasta, including the continued interest in such trends as the Mediterranean and other healthful diets, the rapid rise of plant-based eating, and the enduring appeal of comfort foods.

College and university and healthcare operators are discovering the endless menu possibilities and the huge opportunity that pasta presents.

As the popularity of the Mediterranean diet and cuisine grows so does consumption of one of its staple foods, pasta. A recent consumer survey conducted by the National Pasta Association, which promotes the pasta industry, found that pasta consumption is strong, with 98% of millennial respondents reporting they regularly eat pasta, and a whopping 73% stating they eat pasta at least once a week and maybe more.

Beyond the healthful benefits, many consumers are choosing pasta as part of a Mediterranean-style diet because it is environmentally friendly. The Double Pyramid—a model developed by the Barilla Center for Food and Nutrition Foundation that communicates the relationship of healthful foods and sustainability—shows a lower impact on the planet of the foods, such as pastas, at the bottom of the pyramid.

Savvy operators are using pasta as a platform to appeal to these twin drivers of food choice—be it health or sustainability, pasta is an easy way to showcase healthy foods like vegetables, olive oil, and fatty fish. Examples include Penne with Ceci and Bitter Greens or  Spicy Casarece, with cherry tomatoes, olives, basil, and nasturtium.

The interest in plant-based eating extends beyond the dining hall and into the takeout and food delivery business. Grubhub’s third annual “State of the Plate” report revealed that consumers using their delivery service often opt for plant-based versions of classic take-out items. Pastas make it a breeze for operators to take advantage of this to-go trend with such dishes as Lasagna Moussaka or Feta, Tomato and Herb Pasta Bake, which are easily prepped ahead and travel well from dining room to dorm room.

While pasta fits perfectly into a plant-based diet, the emergence of non-wheat plant-based pastas, such as those made from chickpeas or red lentils, are on the rise on foodservice menus.

Beyond health & sustainability, the most powerful appeal of pasta is undoubtedly as a comfort food. Pasta’s broad appeal – loved or liked by 86% of consumers —  is why it’s long been a go-to on college dining menus. In an increasingly tumultuous world, young people who are self-reporting high levels of stress as well as other generations, are turning to pasta dishes for their comfort-ability. Mac and Cheese has been the #1 pasta dish on menus for a reason!

According to the Grain Foods Foundation, 36% of U.S. consumers named pasta as a food that is comforting during stressful times. Among consumers surveyed by the National Pasta Association, 24% cited classic fettucine Alfredo as their favorite pasta dishes. Other comforting pasta dishes consumers cited as favorites include lasagna (11%), classic carbonara (9.4%), and spaghetti and meat sauce (9%). Leaning into comfort doesn’t have to mean abandoning health and sustainability goals, however. Swapping in a legume pasta, building cheese sauces with bechamel instead of cream, or blending pureed vegetables into sauces are all ways to improve the nutrition without sacrificing that comfort-craveability.

How will your operation take advantage of the many pasta-bilities in October and beyond?

>Interested in teaming up with Barilla to add your own twirl to National Pasta Month? Visit Barilla Foodservice today.