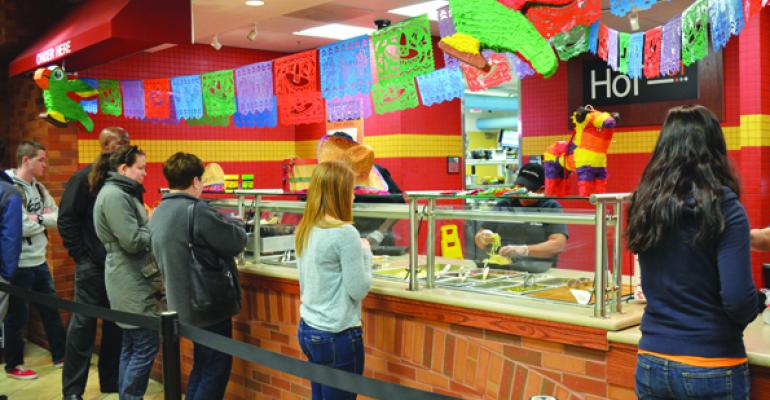 Student votes on Facebook help determine what type of menu will be served at the Hot Spot station on the George Mason University campus.
Operations>Design

One of the hottest food stations on the George Mason University campus is in a formerly underperforming space in the Student Union that had seen successive burrito and take-out approaches falter. Then, dining services hit on a brainstorm: why not offer the two things college students want most—variety and international cuisines—and then go one better by letting them have input on what kind of food is served from week to week!

Enter Hot Spot, which drove daily sales at the location from around $200 to $2,500 a day since its debut at the beginning of this past spring term in January.

Plans now are to move the concept to a larger footprint in the Johnson Center that was previously occupied by a national branded unit, where it will have double the size and capacity.

Hot Spot off ers to-order dishes featuring ingredients and preparation associated with one of eight international cuisine concepts: Greek, Moroccan, Indian, Italian,Thai, Chinese, Mexican and Caribbean. A different one is offered each week, and the choice is largely determined by student votes on the George Mason Dining Facebook page.

However, maintaining variety is a priority so the voting can be overridden to keep the concept mix flowing. A concept never repeats for consecutive weeks even if the votes tend that way. “We want to keep them rotating instead of getting in a rut,” says Ram Nabar, resident district manager for dining services provider Sodexo.

The idea is simple. Each cuisine comes with a selections of vegetables, starches, proteins and sauces/seasonings associated with it. “We try to keep it as authentic as possible,” Nabar says. Students select what they want and it is cooked right there for them.