Anne Arundel County Public Schools began serving mobile summer meals in 2012, and added a second bus in 2013, than changed the locations of the second bus in 2014. Meal counts have soared, from 5,637 in the program’s first year to 10,134 last year.

Burke County Public Schools in Georgia operates 15 buses in a county covering 835 square miles, serving an average of 2,400 students a day at 159 stops on 15 routes for eight weeks with a hot or cold sandwich, fresh fruit, juice and milk, kept packed in coolers. The program began eight years ago when the local recreation department discontinued serving meals in the summer and asked the district to fill the gap.

The Lunch Lizard food truck deployed by Mesa County Valley School District 51 in Colorado went from conception to launch in just eight weeks after funding cutbacks forced the closure of summer school in some sites located in low-income areas of the community, making summer feeding at those sites unsustainable. Utilizing the Share Our Strength toolkit and a $58,000 grant from the Western Colorado Community Foundation, the district retrofitted a commercial food truck into the Lunch Lizard, which serves an average of 30 to 35 kids at each of its stops, way over the break-even point of 20.

Manatee County Schools Food and Nutrition Services (FNS) in Florida is expanding its successful mobile summer feeding program in 2015 by adding more site locations and a second mobile feeding bus to serve six additional locations around the county. The buses serve hot entrées along with fresh fruit and vegetables, and have indoor and outdoor seating to allow kids to enjoy their meal in the comfort of air conditioning or in the shade of an awning.

The food truck deployed by Minneapolis Public Schools (MPS) serves 200 meals a day at three stops: one park and two libraries. MPS’ truck program started in 2013 serving 150 meals per day and was up to 180 a day last summer. This year it’s at 200 so far and growing. The district worked with Hunger Free MN to identify neighborhoods where the truck was needed and selected locations based on this feedback.

Murfreesboro City Schools in Tennessee is supplementing the original Combating Hunger on Wheels (CHOW) Bus that was introduced last summer with two new retired buses in 2015: the Farm 2 School Bus and a CHOW Bus XL. The mobile eateries allow meals to be served to areas of Murfreesboro that are not in walking distance of a permanent summer feeding site.

This summer, Orange County Public Schools in Florida expects to prepare and deliver more than 800,000 meals to more than 230 summer programs out of seven central kitchens. As part of the effort, the district’s Food Bus delivers and serves over 300 meals daily at two stops where children congregate. The mobile program is currently in its fourth year.

Roseburg Schools in Oregon is deploying a retrofitted school bus for summer feeding for the first time this year thanks to a grant from the Oregon Department of Education and the district maintenance department, which did most of the retrofitting work. The menu includes a hot and cold entrée item ranging from various sandwiches and burritos to pizza and hot dogs along with fruits, veggies and milk, served at four sites totaling an expected 1,100 meals per day.

The summer lunch bus operated by Yakima Schools in Washington serves lunch five days a week, offering a hot or cold entrée sandwich choice along with fruit, vegetables and milk. Last year it served an average of 140 children a day at four stops; this year the projection is to average over 300 following the addition of a second Summer Lunch Bus and three more stops.

The newly deployed mobile summer feeding program operated by Weslaco ISD in Texas has started with two locations and is averaging about 45 meals served at each in the early going, which more than covers costs. Expansion may follow once early results have been evaluated.

Washington County Schools in Maryland started its summer mobile meals program in 2013 with one truck. A grant from the National League of Cities expanded that to three vehicles in 2014, when it served nearly 9,000 breakfast and 11,000 lunches. This year a grant from Share Our Strength allowed the outfitting of two additional vans and the five Meal Machine vehicles now serve six open sites and drop meals off at another 10. On a typical day they serve up to 150 children at each site with a menu consisting of a sandwich, fruit, cold vegetables and milk, with some of the produce locally sourced. 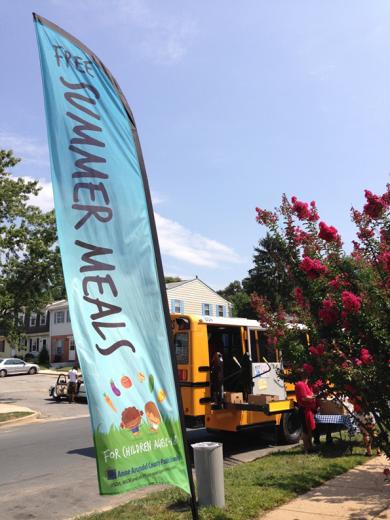